When I was little my favourite holiday was Valentine’s Day.

I wasn’t a popular kid in grade school, but a quintessential budding nerd who read novels at recess, didn’t understand authority for its own sake, and dressed either like a princess or a Dickensian urchin. I spent most of my time trying (and usually failing) to avoid getting the shit kicked out of me. Teachers took pity on me and often let me do group work solo. I had exactly one friend who I only hung out with intermittently because, from her perspective, spending too much time at school with me was risky.

The one day of schoolyard armistice was Valentine’s Day. Suddenly, we were all in it together. Grievances both petty and deeply worn were cast aside. Every person got a card from everyone else. I would look at my desk, at the envelope full of clumsily torn cardboard Valentines and feel like I was an equal part of the strange, usually hostile community around me. It was the one day love was stronger than being weird, or broken, or left out.

As soon as I started high school, Valentine’s Day got very lonely. There’s been very little of my life that hasn’t been romantically entangled: I started dating an older boy as a very young teenager, and barring a single year immediately after I separated from my ex-husband, I have always had a partner. As soon as dating became a part of my life as a skinny, secretive, profoundly awkward teenager, Valentine’s Day stopped being something that meant friendship, community, and a day of peace, and started being about high-stakes romance.

Maybe I never really got the hang of the holiday because I was about as romantic as a vacuum cleaner. Expressions of emotion always made me freeze, or fumble, or break out in hives. I’d signal to a partner early on that, if they wanted, it was a holiday we could ignore entirely. Most were happy to let laziness take over, and while I would publicly proclaim I was one of those people who was above the overdone commercialism of the day (I know, I was totally insufferable), inside I felt a combination of relief and profound loneliness. 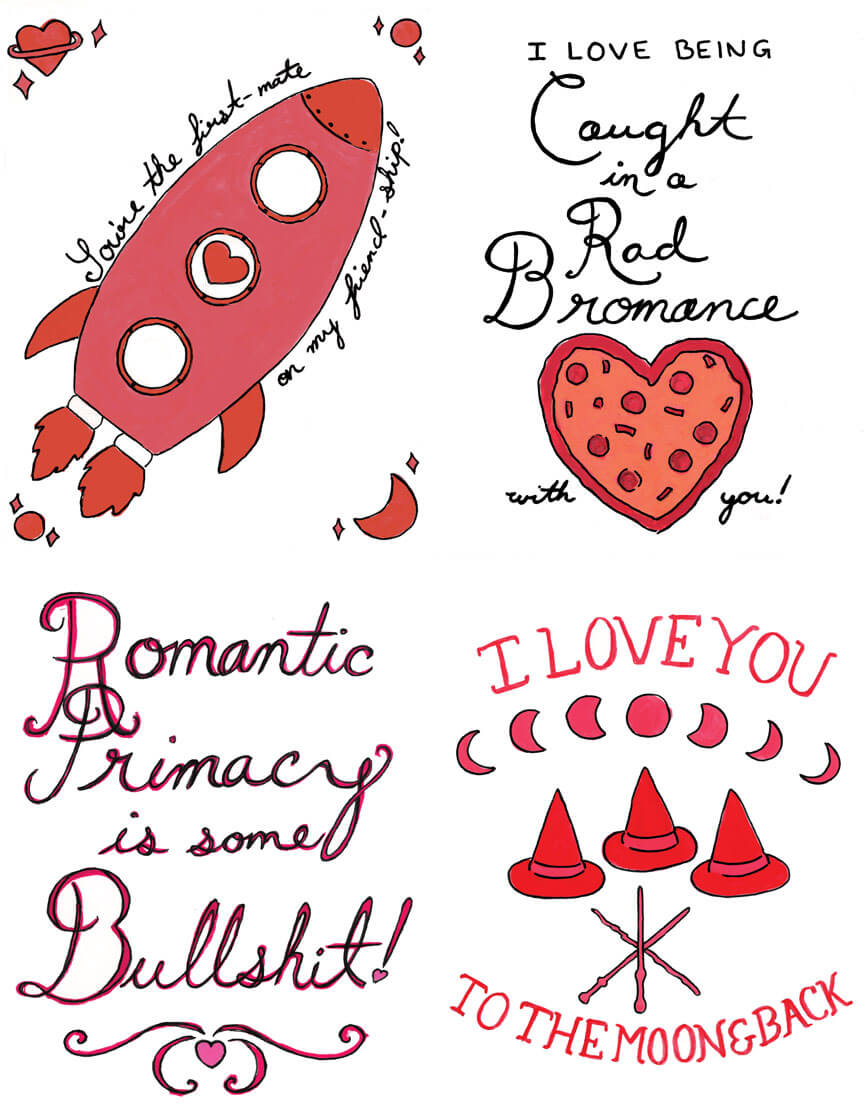 I’ve gradually come to realize that a large part of my awkwardness around Valentine’s Day was deeply associated with my discomfort with monogamy. As an innately polyamorous person who has been, for the most part, in primarily monogamous relationships, the romantic primacy of Valentine’s Day always sat funny with me. I always wanted to be a member of a superhero team. I’ve always been looking for my community. If February 14 was a day about love, why was it something I should only share with my partner at the time? In the past, I’ve been ridiculously, obsessively in love with someone, but often I had a friendship that was deeper and more enduring. I’ve thought my boyfriends were cool, but sometimes, if I’m honest, I thought their ex-girlfriends were cooler. I’ve been happy being part of a couple, but my deepest joy often came from being a part of a community.

For most of my romantically active life, Valentine’s Days have been quiet. My partners and I haven’t gone out to dinner or exchanged expensive presents. There has never been a lot of roses and jewellery. Typically, the day involved buying as much bargain chocolate as I could and watching bad horror movies together. It felt lovely and comfortable and fun, but also lonely and, in many ways, incomplete.

Then, shortly after Valentine’s Day, 2014, the landscape of my romantic life has changed dramatically. At my dear friend Audra’s birthday party, my then-boyfriend met someone who he was attracted to. For the first time, we negotiated the opening of our relationship. I was excited about the possibility of being non-monogamous. It has always been the configuration that has felt the most comfortable and healthy and joyful for me, but it was entirely new for him. I waited a few months before considering seeing anyone else, in case he realised that polyamory made him anxious or unhappy.

Happily, he found he was thriving with the attention and support of two partners, and by June, he was actively encouraging me to seek other partners as well. I decided to go on a date with another lovely friend of mine: Jairus, my friend Audra’s partner. I thought he was brilliant and funny and a mega-babe. I also trusted him, and knew that if it ended up being just a few dates, if we made out while watching gangster movies a few times and remained friends forever, that he wouldn’t make it weird. 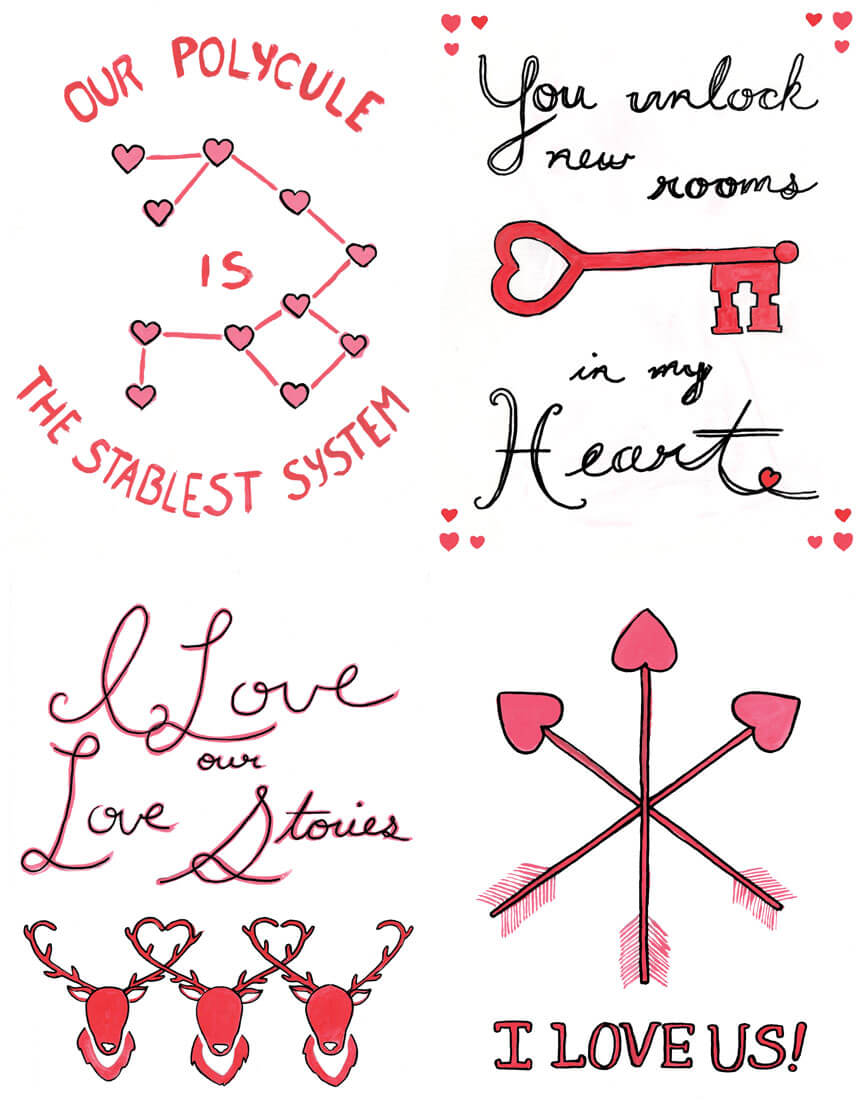 By Valentine’s Day the next year, my life had profoundly changed. I had separated with my partner, and Jairus and I were madly, absurdly in love with each other. So were Jairus and Audra. So were Audra and her other partner, my darling friend and colleague, Chris. My friendship with Audra had flourished since we’d both become partners to Jairus, as had my connection to Chris. Each of us was an atom in a molecule, bonded and stable.

To celebrate the holiday, all three drove up from Toronto to spend the weekend together in Montreal. I was nervous. Remember, I am terrible at being romantic. So, I went a little overboard. Around my apartment I hung pink and red streamers and taped paper hearts to the walls. I set out chocolates and cinnamon hearts in red plastic, heart-shaped bowls. And when the three of them arrived, in a burst of hugs and luggage and unbounded enthusiasm, I felt like a love-bomb had gone off in my home.

The four of us spent the next two days snuggled up on my couch, watching movies and documentaries, and singing along to Pitch Perfect. I had spent more money than I knew was possible at Dollarama on a zillion art supplies, which we turned into strange and lovely valentines and cards made of sparkles and glue and pipe cleaners. We stayed in and ate lasagna one night, and went out for breakfast in a diner the next morning. We drove to the lookout at Mont Royal and made friends with a family of raccoons.

Today, we are a team that works hard to make sure each person feels love. It’s complex, and involves a lot of shared Google calendars, tracking of dietary restrictions of varying levels of compatibility, and never-ending group chats. It has required me to become infinitely more patient—and better at cooking for four.

This Valentine’s, we’re spending the day together again. Jairus is making me a vanilla cake (my favourite cake in the world) frosted half in vanilla and half in chocolate buttercream (which is Audra’s favourite). We’re planning an epic slumber party so we can all wake up with each other on Valentine’s Day morning, and celebrate the day by watching movies starring Vincent Price or Channing Tatum. I’m working on a collection of polyamorous fairytales, because I think we need many more folk stories about the abundance and plurality of love floating around in the world. And we’ve made some valentines for everyone else out there who wants to let their partners, and their partner’s other partners, and their wonderful friends all know exactly how much they are loved.

Just like that strange little kid who looked forward to one day of belonging—one day with an envelope filled to bursting with cardboard love—Valentine’s doesn’t feel lonely at all.

Natalie Zina Walschots contributes regularly to the Globe and Mail, the National Post, and This magazine.
Mariel Ashlinn