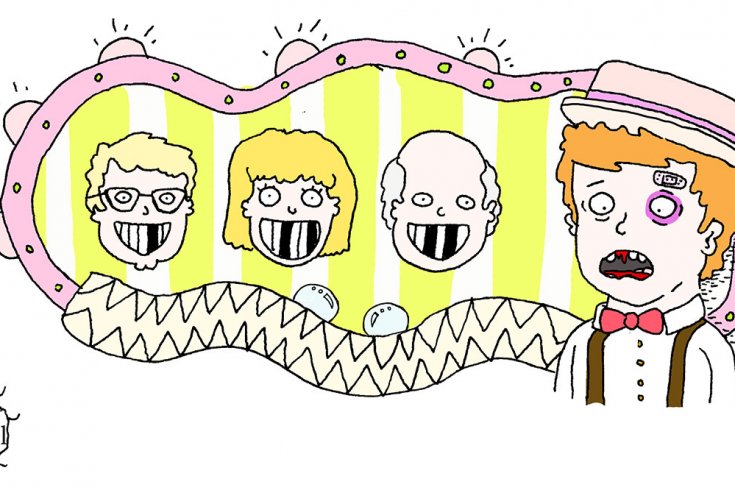 The national anthem’s a strange genre: pomp
straining to conjure a circumstance
under which a love song to a shaded patch on the map
isn’t just sad, a train wreck of cymbal crash
and flaccid crescendo. More often mouthed than sung:
by ant-panted rows of school kids or sports fans
restless not just to get on with the lesson
or game, but to forge away from native land
up to an anthemless plateau, the hush that swells
the more in us the bigger the crowd we mill among—
the inverse of how shadows tell
louder tales the silenter the room becomes.

Her stomach’s rumbling accompanies the intercom
as the apple on her teacher’s desk quivers imperceptibly
with the anthem’s every tinny rum-pum-pum,
a mundane analogue of how paradise’s tree,
shaken by divine breath, might have felt the fruits
tug ever so slightly at its twig ends, but not fall.
Nothing rotted in the clover at its foot.

He tugs at his too-long jersey sleeves with sweaty palms,
and if asked would be hard pressed to explain
the flutter in his gut at every shift of luck
doled out by the capricious gods of game
to those whose pelt he dons to join their pack,
becoming between whistle bursts an alpha version of himself:
faster, stronger, richer—a citizen of promise.

My songs too (though they consist mostly of stuff
I force myself to wrench from what wants, if I’m honest,
to stay silent, and so likely don’t deserve
the name of song) aspire to a kind of anthemhood,
not pompously or so I hope, but rather out of undirected love—
as though my soul’s a mostly empty hold,
not even mine, really, just a vast enclosure with a spot
of me somewhere off-centre, like a teacherless classroom
with nothing written on the board and one kid in it,
or an arena with a single fan sitting in the dim,
watching blank ice. O da-da-da, O da-da-da, O dum.
It would take a lot of us to think these sounds a home.