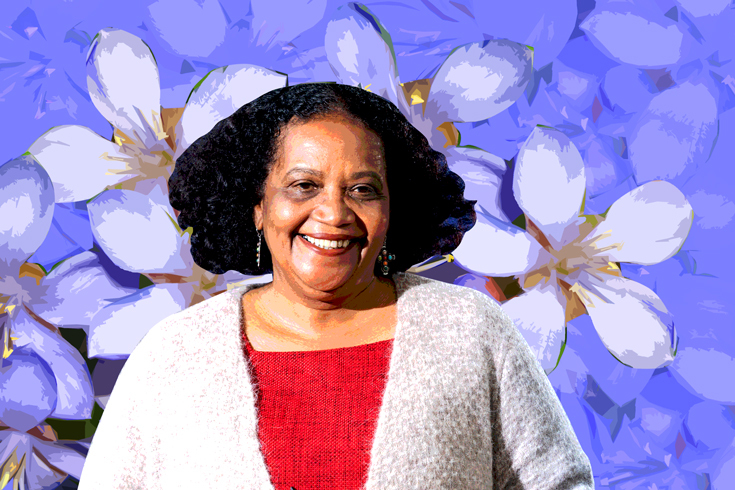 For Lorna Goodison, Jamaica’s flowers, fruits, and herbs are more than sustenance: they are emblems of the country’s steadfast spirit. Take the tamarind, which Goodison repeatedly returns to in her poems throughout Tamarind Season (1980) and elsewhere. Having been brought from Africa and evolved to grow in harsh climates, the fruit is found wild throughout the Caribbean. In “About the Tamarind,” Goodison—who was born in Jamaica in 1947—personifies the tree: “Rooted first in Africa, transplanted wherever / I can thrive.” A symbol of survival, it represents the African Caribbean diaspora, which underwent centuries of exploitation during the transatlantic slave trade and is still oppressed by colonial violence:

Not even the salt of the ocean can stunt me.
Plant me on abiding rock or foaming restless waters.
Set me in burying grounds. I grow shade for ancestors.

Goodison discovers vivid beauty in a world that often denies it. Even in the bustling Jamaican capital of Kingston, she finds abundance despite people having little. In To Us, All Flowers Are Roses (1995), she contrasts the city’s bleak tenements with the “paved yards” where, although “no delicate blooms could survive,” people plant “necessary medicinal herbs” in discarded chamber pots and paint pans. And, because no roses grow in these city gardens, the people took the name roses and “bestowed it / generic, on all flowers.”

Light and dark, hope and despair—these tensions radiate throughout Goodison’s twelve collections of poetry. The first woman to hold the title of poet laureate of Jamaica, Goodison’s singularity as a writer lies in her belief in the micro-resistances of domestic life: she infuses the everyday with “salt and light,” turning mundane acts into transformative rituals. “I’m a poet, but I didn’t choose poetry—it chose me,” she remarked in the Guardian. “It’s a dominating, intrusive tyrant. It’s something I have to do—a wicked force.” Indeed, that “wicked force” has garnered her numerous awards, including, last year, the Queen’s Gold Medal for Poetry, awarded annually for excellence in poetry to a writer in the United Kingdom or the Commonwealth. She is first Canadian and the first Jamaican to win this prize.

Never one to be boxed in, Goodison has channelled her creativity into a multidisciplinary career that spans over thirty years. She has published short stories, essays, and a memoir, From Harvey River, in which she recalls travelling through the Jamaican countryside—the place, she writes, “that was to shape my imagination for the rest of my life.” Goodison is also a prolific painter, with her impressionist-style art often gracing her book covers, including I Am Becoming My Mother (1986) and Heartease (1988). She studied art at the Jamaica School of Art and, later, in New York’s School of the Art Students League. Her paintbrush was never far from her pen. “Some of my poems began their life as ‘leftovers’ from paintings,” she explained in an interview with Calabash, a New York University Caribbean arts journal. “By that I mean, I would often have an idea for a painting, I’d then do the painting but find that I’d not exhausted the idea, so I’d write a poem about it.”

As writer Kei Miller notes, the fecundity of Goodison’s craft can make her accomplishments—and her creative genius—hard to pin down: “I suspect she still isn’t as celebrated as she really ought to be because there simply doesn’t exist the perfect critical language to talk about what she is doing, the risks she is taking, and why exactly they succeed.”

Goodison grew up during Jamaica’s full independence from Britain in the 1970s—a period of political upheaval. In a conversation with Kwame Dawes, Goodison reflected on being a woman poet in Jamaica during the sociopolitical tumult. “We will have to be very honest and say that some very good things happened,” she said. “The way in which black Jamaicans, poor black Jamaicans perceived of themselves underwent a big change. . . . And, culturally, it was a really wonderful blooming forth.” But there was a cost: “I maintain that a lot of good and a lot of change came at a high price.” That “high price” burdens her lines. In the poem “Jamaica 1980,” written after the immense bloodshed and political violence of the 1980 elections, the poet laments how her work changed to reflect her new role:

And mine the task of writing it down
as I ride in shame round this blood-stained town.
And when the poem refuses to believe
and slimes to aloes in my hands
mine is the task of burying the dead
I the late madonna of barren lands.

One of Goodison’s enduring strengths as a poet is her commitment to that “blood-stained town”—while her painterly imagination lifts us up, her vignettes of Jamaican life keep us rooted firmly. Together, we bear witness to it all: suffering and sorrow, triumph and possibility.

The transatlantic slave trade serves as an important beacon in Goodison’s work. Jamaica’s traumatic past is repeatedly brought into the present moment of her poems: the country’s history of colonialism, slavery, and genocide permeates the landscape, and Goodison gives it voice. The violent and systematic erasure of her people at the hands of colonialism was not lost on her when accepting the Queen’s Medal. “As one of a generation of Commonwealth writers whose engagement with poetry began with a need to write ourselves and our people into English Literature, I feel blessed,” she wrote upon receiving the award. “And as a Jamaican poet who has always felt that my ancestors too are deserving of odes and praise songs, and who did not see them in what I was given to read, I am glad that I set out to write these poems.”

While Goodison documents her people’s creative spirit—people, as she writes, “awaiting a last fruitfulness, a new life and greening”—she pays particular attention to women: their bodies, their language, their labour, their matrilineage. Goodison then connects these themes back to the landscape—the resilience of women reflected in the resilience of island flora—to create a flourishing feminist portrait. As she writes in “Survivor,” from Heartease:

That survivor over there
with bare feet and bound hair
has some seeds stored
under her tongue
and one remaining barrel
of rain.
She will go indoors
when her planting is done
loosen her hair
and tend to her son
and over the bone flute music
and the dead story it tells,
listen for grace songs
from her ankle bells.

Here, the survivor’s actions speak volumes: wrest from the chains of slavery, her ankle bells now overtake the bone flute, thereby replacing “the dead story” with “grace songs.” This is further explored in Heartease (1989), where Goodison examines the role of women, and of women poets, as spiritual healers of the community and its entrenched trauma. Working metapoetically, Goodison concocts healing elixirs with her words: “I come only to apply words / to a sore and confused time.” As she instructs in “Heartease III,”

If we mix a solution
from some wild bees’ honey
and some search-mi-heart extract
better than red conscience money
and we boil it in a bun-pan
over a sweet wood fire
make the soft smell of healing
melt hard hearts and bare wire.

These elixirs do not make the past disappear or clear the present of its burdens—but they do “melt hard hearts.” Whether Goodison is writing about the painted tenement gardens or a potent solution boiled “in a bun-pan / over a sweet wood fire,” her poems testify starkly to the truth while transforming the everyday survival of Jamaican people. As critic Denise deCaires Narain observes, Goodison “eschews religion in its institutional forms in favour of a faith in the possibility of collective—and humane—action, despite harsh political realities.” Like the sour-tasting tamarind that softens and sweetens when ripe, the spirit of hope thrives in her poetry—despite, and through, and beyond unrest.

Kate Siklosi is the author of numerous works of poetry and criticism. She is also the co-founding editor of Gap Riot Press, a feminist experimental poetry small press.