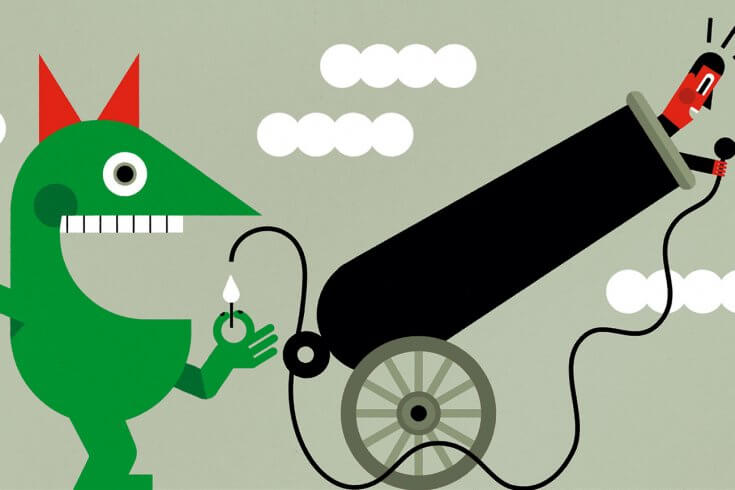 The festival started in 1983 as two days of French-language comedy. Two years later, Andy Nulman came aboard, and under his guidance JFL found a niche. Back then, if you were a scout from Los Angeles looking for comedy talent, the only way to unearth the next Jerry Seinfeld was to sit through countless unfunny opening acts at countless midnight shows at countless smoke-clogged clubs across the continent, night after night after night. The festival helpfully assembled all that talent in one place, then trotted it out over several fun-filled, jackpot-crazed, hope-inflating, punchline-overstuffed weeks while scouts sat back and decided precisely whose dreams they’d fulfill that year.

By the early ’90s, JFL was the most important comedy festival in the world. For comedians, the goal was stardom—or, failing that, a holding deal. This latter was so magical, such a thing of inexplicable wonder, that it often was mentioned in whispered tones, as though the speaker were invoking the name of some fickle but potentially beneficent deity. “Did you hear about so-and-so? She got”—whispering now—“a holding deal.” It was like the opposite of cancer. A holding deal meant that some network would pay you a lot of money—like, six figures—to sit around in LA in the sunshine and not do anything for anyone else while said network figured out how best to make you a star. If you were a stand-up comedian used to getting paid in drink tickets, a holding deal was a kind of miracle. And you, the stand-up comedian, were a scratch-and-win lottery ticket, just waiting to be scratched by someone else. JFL was a three-week festival of fevered scratching.

Artistically speaking, the first stand-up boom started in the ’70s, with the ascendance of wild and daring new voices such as Steve Martin, Richard Pryor, Lily Tomlin, and George Carlin. Stand-up emerged from the crusty chrysalis of the Catskills to become a full-blown social and artistic force.

Economically speaking, though, the boom didn’t really coalesce until it reached TV screens—that is, until the mid-’80s, when Bill Cosby’s sitcom, based on his comedy routines, conquered Thursday nights and the ratings chart. American networks had stumbled on an apparently infallible formula: find a talented young comedian; create an eponymously titled sitcom around him or her; print money; repeat. Jerry Seinfeld became Seinfeld; Roseanne Barr became Roseanne; Martin Lawrence became Martin; Ellen DeGeneres became Ellen. Everybody loved Everybody Loves Raymond. Tim Allen turned his tool-centric jokes into a tool-centric media empire. (We forget that, in a different age, Allen had the number one TV show, number one movie, and number one book in America all at the same time.) “There was such desperation to find that next voice,” ICM Partners agent Ruthanne Secunda told the website Vulture in 2013, in a retrospective by Josef Adalian about the stand-up boom. “You could identify someone you thought was really fantastic . . . and before you knew it, they had a show being developed around them.”

JFL had always attracted big-name talent for its large-scale galas—people such as Jim Carrey and Jon Stewart and Don Rickles—but New Faces of Comedy was the show at the festival that generated all the industry heat. That’s how everyone described it, too: heat. We, a bunch of comedians, said the word with straight faces. As in, “Have you seen such-and-such? I heard he killed at New Faces. Man, he’s got so much heat right now.”

I went to JFL as a stand-up comedian once, sort of. A good friend of mine was performing a one-man show that required a costume change, which required someone to tell jokes to the audience while the person they’d actually come to see switched clothes. I was that time-killing joke teller, and I learned two things during my visit. One: French Canadians apparently don’t share a common cultural reference point to the Canada Fitness Test or, if they do, they don’t find it funny. Two: people at JFL rarely (if ever) look you in the eye. Since I was travelling with someone else and wasn’t an invitee myself, I had absolutely no heat on me. I was heatless. I did, however, get to wear a name badge colour-coded for “Talent.” In the hierarchy of badges, Talent was at the top. Industry was a close second. Everyone with Industry badges was scouring for people with Talent badges (Who are you? Do you have heat?), and everyone with Talent badges was wondering where all the Industry badges were (probably off chasing someone with heat).

All these badges on lanyards hung roughly at chest level, so that’s where people always looked—either there, or just over your shoulder. The experience of attending a JFL party was the experience of holding multiple conversations in which whomever you’re talking to is continually scanning the room for someone more important to talk to. I never blamed those people. I was heatless, after all. Besides, I was doing the same thing.

Just for Laughs became shorthand for a certain kind of ambition—the kind that allows you to skip the line. JFL was like Star Search, except it was live, it was in Montreal, and it actually worked. But it also became synonymous with a certain kind of disappointment. Heat, it turned out, was fleeting. I knew one very funny stand-up comedian who was the envy of the Toronto alternative scene. She had a likeable demeanour and several clever slacker jokes, and she was extraordinarily easy to imagine as the star of her own TV show. This, evidently, was easy for network scouts too; they whisked her off to LA with a holding deal. She returned home a few years later, showless. Another comedian went to Montreal with his best seven, got signed to a lucrative deal, and packed up and moved to Hollywood. When he got there, someone wanted to book him as a headliner at one of the big comedy clubs, because lots of industry people now wanted to see him, because he had heat. What he didn’t have was more than seven minutes of material—and a headlining gig usually requires about forty-five. He’d only recently started doing stand-up. He had barely enough material to get into JFL. He had barely enough to get his ticket to LA and his deal. The deal lapsed, the heat faded, he left California, and last I heard he’s no longer doing comedy.

Today, of course, if you want to see that guy, or his modern equivalent, or any other up-and-comer, you just watch him on YouTube. As with so many things in the pre-Internet age, it’s hard to remember a time when you couldn’t see anyone in the world doing anything you wanted, in a matter of seconds, on the nearest screen. Curious about Trevor Noah, the new host of the Daily Show? Here are links to videos of every stand-up set he’s ever performed. What about that new comedian who apparently killed last week at New York’s underground Big Terrific show? Just watch her videos or, better yet, follow her on Twitter, where she’ll deliver new jokes to you all day, every day, on the hour, to your phone, free. Gone are the days when you actually had to climb aboard a plane, fly to Montreal, and sit through an entire New Faces showcase in the hope that you might stumble upon the next Mitch Hedberg. Now you can just skim through clips on Funny or Die.

Meanwhile, the stand-up sitcom boom went bust. It turned out that not every comedian given a show with that comedian’s name on it would turn into America’s next favourite. For every Roseanne and Ellen, there was a Titus (starring Christopher Titus) and a Simon (starring Harland Williams). Friends was on the rise, and its cabal of telegenic stars became the new model to emulate. When stand-up comedians gravitate toward TV now, it tends to be for high-art cringe-comedy cable shows such as Curb Your Enthusiasm and Louie. And it’s hard to judge whether someone is well suited to make a show about the bittersweet absurdities of life by watching them do seven minutes of jokes at a midnight showcase.

All of which renders JFL irrelevant—and simultaneously gives the festival new life. Now it serves almost the opposite function it once did. Look at this year’s lineup of superstars: Dave Chappelle. Mike Myers. Neil Patrick Harris. Trevor Noah (that guy taking over the Daily Show whose videos you’ve already watched). Before, JFL was famous for finding people and delivering them to TV and movies; now it takes people you love from TV and movies and delivers them to you— live. Which actually is a greater service to comedy, if not to unknown hopeful comedians.

Comedy is different now from what it was in JFL’s heyday. We have all the comedy we need. There is no shortage of new faces, and an hour on Twitter is reliably funnier than an open-mic night at Yuk Yuk’s ever was. Now live comedy is what’s being lost. You and a comedian in a room? Everyone laughing together, rather than skimming through highlights on a phone? Just for Laughs, as a festival, can still do what we, as fans, need it to do—let us feel the electricity in the room for one night, or even just for seven heavenly minutes.

Adam Sternbergh (adamsternbergh.com) is a contributing editor to New York magazine. His third novel, The Blinds, was released in 2017.