Life in the Afternoon | The Walrus
Skip to content 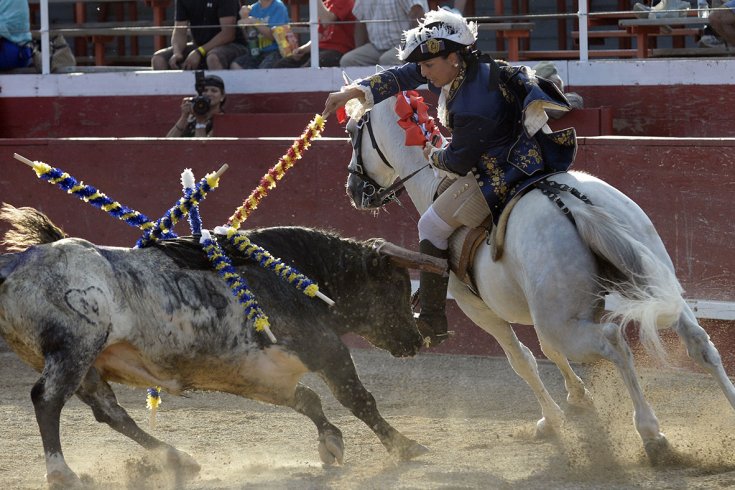 A 1,000-pound Mexican fighting bull, his coat the colour of mud, trots into the arena. He is met by two toureiros, or fighters, one on horseback, the other on foot. The men agitate the bull—with shouting, fancy footwork, the wave of a cape—as part of an elaborate ceremony designed to show off their skills. There is little doubt, however, that the outsize beast is in charge. The fighters artfully leap aside, and the spectators gasp accordingly. The mounted man, or cavaleiro, hurls his weapons, which stick to the bull’s back, bristling like porcupine quills.

After twenty minutes, the first stage of the fight draws to a close, and a group of eight boys in their late teens and early twenties queue up behind a leader, who positions himself, arms akimbo, in the bull’s path. They look like dandyish linebackers, stuffed into cropped brocade jackets and knee-length tan breeches, their abdomens tightly corseted in crimson sashes to protect their vital organs. These are the forcados, and it is their job to perform the pega de caras, or “face catch,” to subdue the animal. In English, they are known as the suicide squad.

The leader shimmies his shoulders. He punctuates each movement with a taunt, his consonants like the staccato of a drumstick against a tightly tuned snare: “Toiro! Toiro! Toiro!” The bull takes offence. He charges, the lead forcado leans in, and the men collapse behind him in unison, diving into the animal like a stocky line of dominoes. Some get dragged, others nearly trampled.

By now, if this fight were taking place in nineteenth-century Spain or Portugal, the bull would be bloodied and exhausted. For the final act, a fighter would slaughter him before the cheering crowd. However, this is happening in the cornfields of Dundalk, Ontario, in the summer of 2013. The cavaleiro has stuck the bull not with razor-sharp javelins but with Velcro-tipped plastic batons; the beast has a Velcro strip along his back, affixed with “animal-friendly” adhesive. Eventually, one of the forcados grabs the bull’s tail, a group of cattle enters the ring to herd him out, and the fight is over.

Here, on the sprawling Ganadaria Sol e Toiros complex in rural southern Ontario, a generations-old Iberian tradition has become thoroughly modern, sanitized for the animal rights era and Canadians’ more delicate sensibilities. These Portuguese-style bullfights are touted as bloodless, which is partly true: from the four-legged combatants, not a drop gets shed; the same cannot be said for the humans. After the fight, an injured forcado—limping, his face leaking blood—is helped into an ambulance outside. Beside the emergency vehicle stands a row of portable horse stalls, as well as an inconspicuous sedan that, I am told, belongs to the Ontario Society for the Prevention of Cruelty to Animals.

Iberian bullfighting as it exists today dates back to the eighteenth century. The ornate costumes—military meets Liberace—and ritualized staging are time stamped with the flourishes of the era; the pastime has become synonymous both with peninsular identity and a certain macho romanticism. As Ernest Hemingway wrote in 1932’s Death in the Afternoon, “Bullfighting is the only art in which the artist is in danger of death and in which the degree of brilliance in the performance is left to the fighter’s honor.”

Portuguese bullfighting diverges from Spain’s more famous iteration in several ways. Most notably, contemporary Spanish fights still culminate in the animal’s death. In Portugal, although the sport usually remains bloody, killing a bull in the ring has been more or less illegal since 1928. Instead, following a corrida de touro, the animal is slaughtered privately, away from the ring—or not at all.

In Canada, of course, even wounding the beast is out of the question, let alone killing it. A Listowel, Ontario, farmer named Joe Borges is usually credited with bringing the sport to the province in the late 1980s. As Joe Mafra, once a forcado in his native Portugal, puts it, Borges also “took all the (pardon the language) bullshit” around negotiating zoning bylaws and placating the OSPCA; the organization frowns on bullfighting. “The society does not have the authority to ban such events,” says spokesperson Alison Cross. “But we can inspect and ensure that the animals are getting the care they require, that all standards of care are being met, and that the animal is not in distress.”

Sol e Toiros is run by Elio Leal, the owner of a successful high-rise construction company. A compact man in his fifties with a groomed goatee and an expensive-looking smile, he likes to boast that most of Ontario’s sizable Portuguese Canadian population knows him by name, all thanks to bloodless bullfighting. Although other such facilities operate in the province, Sol e Toiros claims the only purpose-built venue. Leal erected the 3,000-seat Monumental Vitor Mendes arena in 2011, but he has yet to fill it completely. Keeping the enterprise afloat costs about $250,000 annually,$200,000 of that from his own pocket, and the construction came in at just under $1 million.“Everything I make,” he laments, “I burn it here.”

Where Leal grew up, on in the Azorean island of Terceira, corridas de touros were joyful, albeit violent, occasions. Families and friends travelled from across the island, sometimes by foot, to reunite for daylong festivals of food, music, and merry bloodshed. While the gorier bits of the affair were left in the old country, the communal strains remain. At Sol e Toiros, families picnic over food they have brought or purchased from Leal’s team of volunteers. “It’s the way we used to do it back home,” he says, gesturing toward his helpers.

Leal does employ some staff to oversee the ranch that surrounds the site, including a live-in family of three that tends to the thirty-six Portuguese Lusitano horses and the 280 bulls, calves, and breeding cows he keeps there. Because the bulls are not speared for provocation—only mildly annoyed by Velcro and plastic—the meanness must be wired into them. Vitor Mendes, the arena’s namesake and, as far as Leal is concerned, one of the finest Portuguese toureiros of all time, visits Dundalk once a year to oversee the selection of breeding cows. Any trace of complacency or Ferdinand-esque sweetness gets rooted out of the bloodline. The 75 percent of Leal’s stock that fails to make the cut becomes, as he puts it matter-of-factly, “very good beef.”

Also on his payroll are three Portuguese horsemen, whom he houses for several months per year to prime his stallions for battle. During the fighting season, which lasts from June to August, he flies in professional toureiros and forcados from California (another bloodless bullfighting hot spot), Mexico, and, most often, Portugal. If a fighter is not up to snuff—or refuses to bend to the sport’s politically correct modifications—Leal swallows the expense and sends him or her home. “For them,” he admits, “this is bullshit: fighting a bull that hasn’t been, as we say, picado—speared. What it does is, it takes a lot from the animal, but the purists say it also brings the best out of him.”

Southern Europe’s devastated economy poses a deadly threat to the bullfighting tradition, and it has forced some of the sport’s staunchest purists to make peace with bloodlessness. Portuguese bullfighting attendance plummeted by 20 percent between 2011 and 2012 alone. In Spain, demand for bulls has dropped by half, thanks to the twin threats of the country’s financial crisis and a growing animal rights movement. Enriched by Toronto’s condo boom, Leal is better positioned to compensate bullfighters than many of his counterparts back home. “There’s no money,” says João Soller Garcia, a cavaleiro from outside Lisbon. “We have to choose the fights and go only if the company has money to pay. If they don’t have money, I don’t go.”

In Canada, there may not be spears, but at least there is work, even if the work is not quite the same. As Joana Andrade, another young Portuguese cavaleiro—and one of the few women working professionally in the sport—points out, the bull reacts differently when it is not speared; or, as she puts it, “It doesn’t react.” This added challenge makes the fighter’s skill that much more important, for the bull’s provocation and for the benefit of the audience.

Luckily, or perhaps unluckily, a particularly mean bull greets Andrade in the arena that day. I take in the show ringside, among grizzled ex-matadors and Leal’s old friends. As the bull charges toward us, I follow their orders to duck behind wooden panels at the outer barrier. If the bull is a jumper, they tell me, he won’t be able to gore us back here.

Stripped of the violence of animal sacrifice, bullfighting becomes a piece of theatre—a simulation of conquest as opposed to, in the old style, a microcosm of it. But the bull is still big, he is still strong, and he is definitely still pissed. As the fight goes on, Andrade’s hair comes loose from its chignon. Before a crowd of tiny female fans, who chant her name the way other little girls might cheer a teen idol, a flash of something like fear crosses her face.

Kelli María Korducki is the author of Hard to Do: The Surprising, Feminist History of Breaking Up. In addition to The Walrus, she has written for the New York Times, the New York Times Magazine, and the Guardian. She lives in New York City.