Life as an Indigenous Archaeologist | The Walrus
Skip to content 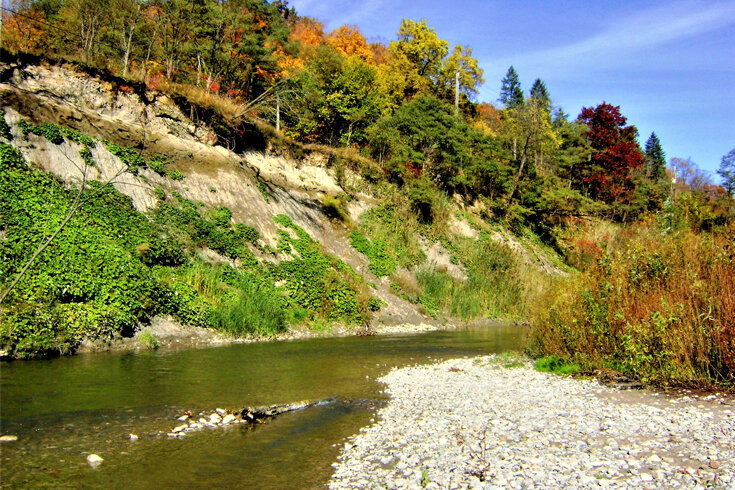 It’s difficult to imagine, while driving on Highway 401 through Toronto, that this was once a land of trees, rivers, and the ancestors. But, if you look hard enough, you see the past landscape peeking through as you drive over the valleys of the Rouge, Don, Humber, and Credit Rivers. These rivers and their many tributaries were once our highways. If you head north, the urban sprawl soon gives way to bucolic landscapes, including corn fields. These corn fields also hide the past, a time when they surrounded the palisaded village built by the ancestors.

I’m Stacey from the Michi saagiig (Mississauga), and I’m an archaeologist at Parks Canada, a federal agency mandated with ecological and cultural resource preservation and presentation. Archaeologists and Indigenous people have not always understood one another. Aandi wenjibaayan. So where do I belong? To me, archaeology is a way to walk with the ancestors, a way to connect with the past. A history that was taken from my family but not forgotten.

In my almost twenty-year career with Parks Canada, I have had the opportunity to attend powwows, meetings with council members, and ceremonies held by Indigenous groups throughout Ontario. In my role as an Indigenous person who is also an archaeologist, I take these opportunities to share our history through a different lens: that of the artifact. Artifacts may be only remnants left behind by the people who went before us, but to me, holding an artifact is like shaking hands with the ancestors. Artifacts are teachers who have their own stories of how they were created, utilized, and sometimes, discarded. I encourage other Indigenous people who may have never seen a sherd of Indigenous ceramic or an intricately flaked projectile point to hold them and see the technical and artistic skills needed to create them, and to feel pride in knowing that our ancestors created these objects that have lasted thousands of years. Often, Elders and others attending these functions will teach me about the artifacts by sharing their own stories.

Even in the field, conducting archaeological work, I am being taught our history. Though Indigenous people walked lightly on the landscape, they left behind many ways for us to reconnect with them. Understanding how to read those clues is what archaeologists try to do. When standing at a potential archaeological site, we take note of the landscape: Are we on a high bluff? Near water? In a valley? When excavating, we note the soils: Are they well drained? Are they rocky? Would I camp here? Reading the landscape and the soils offers us a more in-depth understanding of how people lived on the land. I have worked in all the national parks, national marine conservation areas, and many of the national historic sites within Ontario. These are all unique areas that protect archaeological sites that reflect how the Indigenous and later settler populations utilized the landscape and its many natural resources.

One of the parks where I have worked is the Rouge National Urban Park, on the east side of Toronto. This national park was established in 2011 along the watershed of the Rouge River, from its headwaters in the Oak Ridges Moraine down to its mouth at Lake Ontario, to protect the Carolinian ecosystem, meadow, and riverine habitat. It is the first federal area in Canada to include agricultural land. Once fully established, it will be the largest urban park in North America. The park also protects 10,000 years of human history.

There are approximately 326 registered archaeological sites, both Indigenous and settler, identified within the Rouge National Urban Park. The Indigenous sites range from single, isolated finds to palisaded villages—communities that were protected by walls or fences. They date from the Archaic period (7000 BC to 1000 BC), through to the Contact period (circa 1650), and well into the twentieth century. The park also contains a national historic site: Bead Hill, a seventeenth-century Seneca village. Settler sites include mills, blacksmith shops, designated heritage houses, cemeteries, and even the foundations of a post office.

The Rouge connects with other large rivers, such as the Holland, to provide access to Lake Simcoe, the Trent-Severn Waterway, and Georgian Bay on Lake Huron. The Rouge and Little Rouge Rivers, which join and separate along the valley, formed the eastern arm of a major trading-settlement area along the north shore of Lake Ontario. The Humber River formed the western arm of this area, now referred to as the Toronto Carrying Place Trail. These rivers, the highways of the past, transported goods and people for millennia before the landscape was dramatically changed by settlers. When settlers arrived in the late 1700s, they began to clear forests and establish small villages that would eventually grow into the cities of Stouffville, Markham, Scarborough, and Pickering.

Deforestation and other changes to the landscape altered the Rouge River, which was once navigable many kilometres farther upstream than it is currently. To combat these changes, the Rouge National Urban Park and the Toronto and Region Conservation Authority have jointly undertaken an extensive watershed-rehabilitation program, which includes planting where the land meets the waterways as well as creating new wetlands and fish-spawning habitats. Visitor welcome areas, over twenty-five kilometres of trails, and the restoration of an existing campground are also planned. Parks Canada’s archaeological team conducts archaeological assessments prior to the implementation of any of these projects.

In addition to this work, the archaeology team confirms the inventory of registered archaeological and cultural heritage sites, assessing their condition and investigating areas that have not had previous archaeological assessments. One of the results of all this work is the identification of new Indigenous and settler archaeological sites.

Parks Canada has a small archaeological team that has been focusing on the Rouge National Urban Park during these critical establishment years. To complete the enormous amount of work scheduled, our team relied on field liaisons from various First Nations communities that represented the ten Indigenous members of the Rouge National Urban Park First Nations Advisory Circle (FNAC) to help us conduct the fieldwork. The FNAC comprises ten First Nations communities, including the Mississaugas of the Credit, Six Nations of the Grand River, the Huron-Wendat, and the Williams Treaty First Nations. The field liaisons not only assisted in conducting the fieldwork but also shared their experiences working on other archaeological sites. Their experience and knowledge of artifacts greatly sped up our work. More importantly, we developed a mutually beneficial exchange of ideas, knowledge, and history. Many expressed their desire to uncover their history and connect with the ancestors, something archaeology can provide.

As Indigenous people, we are deeply connected to our history, our ancestors, and the land. Even though cities like Toronto cover and hide it, our past is still there. We just have to see. The ancestors walked before us, but they are still teaching us.

Stacey Taylor is an Anishinaabekwe of the Michi saagiig. She has been a terrestrial archaeologist with Parks Canada for almost twenty years, working in national parks and national historic sites in Ontario, Nova Scotia, Quebec, and the Northwest Territories.