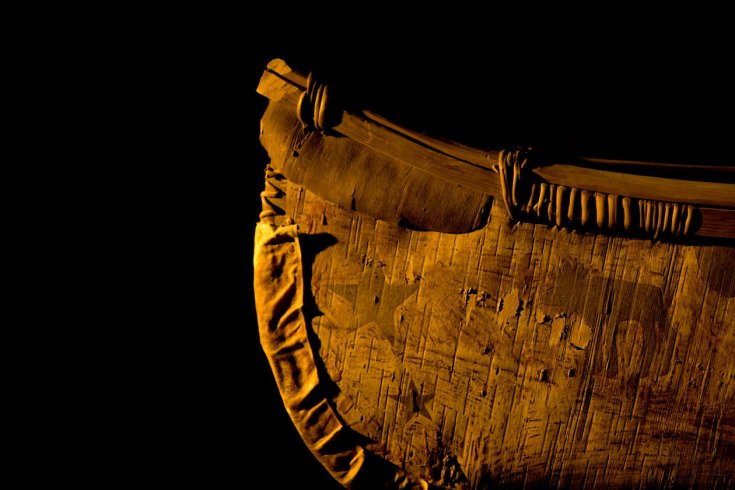 Nearly ten years ago, one of UK’s most prominent families found the remains of a 230-year-old birchbark canoe on their estate in Cornwall. They had heard stories of the canoe, which according to legend, was bought back from Canada by their ancestor Lt. John Enys. Eventually, the Enys family repatriated the vessel to Canada, where it’s now part of the world’s largest collection of canoes at the Canadian Canoe Museum in Peterborough, Ontario. Doug Williams, an elder of the Curve Lake First Nation, and Anishinaabe artist Leanne Betasamosake Simpson were there to welcome it home in 2012. Both hope that one day the canoe will be repatriated again, this time to the Indigenous community to which it belongs.

Simpson later wrote about the profound experience in her song “How to Steal a Canoe.” “It became a metaphor for me as an Indigenous woman in Canada in 2017,” she says. “It feels like everything has been stolen and you have to get it back.” In fact, there are sacred objects belonging to Canada’s Indigenous peoples dotting the globe, including thousands inside our own borders. They are displayed in museums, or packed away in storage, hidden in garages, both forgotten and remembered, depending on who is doing the thinking. There is no legislation about where they should go and no funding for Indigenous groups to bring them home either, let alone create their own museums.

Ancestral remains, classified as “Groups of Ancestors,” make up the vast majority of displaced history. For many Indigenous communities, they’re also the priority: they’re not artefacts, nor things to be owned—they are still a part of the Indigenous community where they once lived. “It will probably take a generation to rebury the ancestors that have been exhumed during the last hundred years,” says Louis Lesage, director of the office of the Huronne-Wendat Nation. The task is so daunting, he adds, that he’s not sure what’s next on the list of priorities—they haven’t been able to think beyond the first.

But, of course, there is more. Displaced sacred artefacts, often called “treasures,” also number in the thousands and can include ceremonial masks, wampum belts, button blankets, and more. Some of these items were never even meant to be photographed—let alone displayed in a museum. Encouragingly, however, some museums are beginning to return what isn’t theirs to keep.

Paula Whitlow, museum director of the Woodland Cultural Centre, in Brantford, Ontario, helps advocate for communities who are working to have their sacred objects and ancestors returned. When assisting a Mohawk community in the return of their medicine masks, Whitlow made sure not to touch the sacred objects. She understands that she is not a member of the society and that there are strict rules as to which members of a community can move what. Ensuring these rules are respectfully followed is its own challenge: masks have been trading hands and hanging on walls in large museums and galleries all over the country, such as at the ROM in Toronto, for decades—sometimes even returning to communities painted with arsenic. The Woodland Cultural Centre keeps replicas of wampum belts, but any authentic belts, says Whitlow, are “obviously are not ours to keep.”

Lou-ann Neel, artist and descendent of the Kwak’wala speaking people, has spent her life going from museum to museum to learn the craft of carving. At those museums, she studies the work of her own grandfather through glass and dreams of some day running her hands over his carvings—one of the ways she teaches herself to create.

Familial knowledge, and the passing down of technique, plays a powerful role in Indigenous art. Sometimes, that role even displays a power all its own. Once, Neel spent a few days doing research at the Burke Museum of Natural History in Seattle. While there, she noticed a rattle. She picked it up, shook it and appreciated the unique sound it made. She put it back, but couldn’t put it out of her mind. So she picked it up again and looked more closely at the carvings, realizing she could learn something from them. She took a few pictures and put it back down. It kept calling to her. She couldn’t focus on her work. Finally, she asked the collections manager for information on it. When the card was brought over Neel saw that the rattle was her biological father’s—someone she had never met.

Neel is in her early 50s, and her generation is one of the last that went to residential schools. “We’re still suffering the trickle of being pulled away from the culture,” she says. She’s made it her life’s work to bring some of the language and methods of creating art back to her people. She believes repatriation is a good place to start. Like Simpson, Neel believes that Indigenous peoples’ repatriation struggles mirror their struggles with identity and belonging. Many artists would gladly agree to make replicas for museums, Neel adds, if it meant repatriation. To her, museums should focus on the living culture of Indigenous people, and not be storehouses for stolen artefacts—not to mention a stolen culture.

In March, Neel shared these thoughts with the audience at the symposium for Indigenous Perspectives on Repatriation presented by the Royal British Columbia Museum (RBCM) in partnership with the First Peoples’ Cultural Council. The event was the museum’s first major act since its September 2016 announcement that the BC government would fund the museum $2 million towards repatriation efforts. The funding is meant to help the provinces’ Indigenous locate—and return—ancestral remains, sacred items, and intellectual property. Dozens of requests have already been made. In this way, repatriation is a symbol of everything else: a step toward the potential healing of a country, and the rebuilding of its Indigenous nations. Or, as Neel states simply: “We want our beautiful treasures to come home.”

Museums in Canada have a “great will” to repatriate artefacts says Jack Lohman, RBCM’s CEO, but he adds that there are simply not enough resources. If the government wants to commit to reconciliation efforts, more funding is needed for wide scale repatriation. For Lohman, one of Canada’s greatest current challenges is answering the question: How do you successfully decolonize a museum? He recognizes that the answers to the question must take their lead from Canada’s Indigenous populations. “I want to move away from the museum as the expert,” he says. “The Indigenous people are the experts.”

One of those experts is Lucy Bell, who heads the museum’s newly created First Nations Department and Repatriation Program. As a member of the Haida Nation, she’s also a founding member of the Haida Heritage and Repatriation Society. Right now, Bell’s top priority is to help the museum return the over 400 ancestral remains that are currently housed inside its walls. But she also knows her work doesn’t stop there. In Bell’s first week at the RBCM, she found documents in the museum’s archives about pioneer medallions. In 1971, BC commemorated its entry into Confederation by presenting the medallions to those who were either born or living in Canada prior to 1897. Bell began reading. Stopped when she saw her grandmother’s name on one of the papers. “It reaffirmed I’m in the right place,” says Bell. “It’s nice to know my ancestors are with me.”

Blair Mlotek is a freelance writer based in Toronto. She is also the Arts & Ideas Editor at This Magazine.