“The more constraints one imposes,” said composer Igor Stravinsky during his 1939–40 Harvard lectures on the poetics of music, “the more one frees one’s self… the arbitrariness of the constraint serves only to obtain precision of execution.” The modernist tradition Stravinsky helped articulate a lifetime ago left an indelible mark on the following seventy years of art. Canadian Micah Lexier is a conceptual artist who has inherited this sensibility. Born in Winnipeg in 1960, he possesses the precision of a Swiss watchmaker, and a poetic appreciation for self-imposed constraint. Lexier was raised on the prairies, moved east to attend art school in Halifax, and spent a decade in Toronto, followed by another in New York, before returning to Toronto in 2008.

For over twenty years, he has focused on elemental themes of time, mortality, language, and value, using industrial vernacular materials like coins, neon lights, and bricks to visualize poetic, autobiographical measurements. His ongoing series titled A Minute of My Time, begun in 1995, is constrained by a misleading duration in the title—the moment it took him to draw the original post-LeWitt doodle that forms the series’ base doesn’t include the time it took to perfect the execution of the reproductions, in which the original is transformed by an extremely time-consuming factory process into water-cut metal sculptures. By exaggerating the gulf between the artist’s hand and the object on display, Lexier’s projects have Walter Benjamin’s influential essays in mind. The scribble is an essentially arbitrary gesture. His light touch on the original is countered by a relentless pursuit of supple, smooth precision through the detail of the mechanical reproduction.

Lexier’s printed work includes a colouring book of conceptual artworks for Artspeak and a book work for Paul + Wendy Projects in 2008 (pages include “this is me writing with my left hand” and “this is me writing by holding the pen stationary and moving the paper”); his work frequently appears in literary and visual arts journals. The unemphatic four-page text piece presented here evolves from an Oulipo-style work that ran along the pages of Fillip, and a cover and folio that appeared last year in Border Crossings. These are phony sentences: they stop making sense in order to become artwork. Lexier’s texts are so self-recursive as to destroy all paths to sense, to the external signification of the world around us or in us, the stuff that language is supposed to connote. They become about themselves. His language loops infinitely into itself: “The left half of this sentence has the exact same number of letters and words as has the right half.”

Considering the space they receive, the text pieces look so effortless. The editors forfeit their margins to Lexier’s own constraints, using the magazine as a study in typesetting, with special attention to kerning, colour, and character count. There is an echo of John Barth’s Möbius-strip fiction “Frame-Tale” which goes: “ONCE UPON A TIME THERE WAS A STORY THAT BEGAN, ONCE UPON A TIME THERE WAS A STORY THAT BEGAN…” The anonymity of Barth’s meta-tale is similar in spirit to Lexier’s uniformly uninflected first-person non-narratives, which are nevertheless strangely autobiographical. The sum of his letters frequently refers to a statistical aspect of aging and mortality. The age of the artist, or the day Lexier was born, or average life expectancy or other integers of personal identification are encoded in the nondescript metaphysic of his sentences. His snaky phrases bite at their own tails.

Lexier’s variations on this concept run through the decades of his art practice: a pile of coins from 1995 called One and the Same; a minimalist stick sculpture, Two Equal Piles of 37, from 1998. In 1995, the Art Gallery of Ontario installed a Lexier piece called A work of art in the form of a quantity of coins equal to the number of months of the statistical life expectancy of a child born January 6, 1995, displayed in two boxes with a total of 906 copper coins. AGO staff or a selected member of the public will move a coin from one box to the other, every month for the next seventy five and half years.

Lexier has more serious coin on display this year at the Bank of Montreal head office in Toronto. For BMO’s corporate art collection, he has studded an entire wall with 20,000 custom-minted coins, each emblazoned with its own letter to spell out a short story titled “I Am the Coin,” by Toronto writer Derek McCormack. The story recounts the exploits of a single coin pinned inside the artwork. (It can be read on the website iamthecoin.com, which mirrors the project’s density.) A single line of these nickel-plated coins reads, “As hard as it is to believe I was nothing till I was made into a coin before that I was a blank a blob a bit of metal worth a fraction of a fraction of a cent but now I am a coin I am worth much more I am art and art is more important than artists am I right I am.” Lexier’s work visualizes the monetary exchange that is so often discussed around the art experience, the cost of the work, the value of the project. Viewing a kind of portrait of one of Canada’s most powerful banks made from uniquely minted coins seems like time well spent.

Lee Henderson, an associate writing professor at the University of Victoria, published the award-winning novel The Man Game in 2008.
Micah Lexier 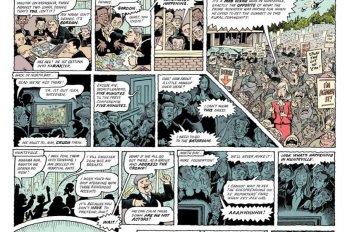 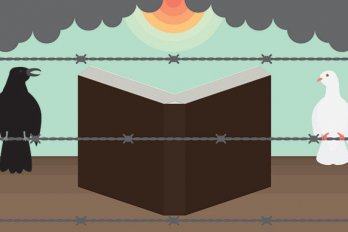 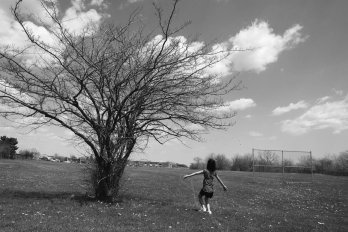