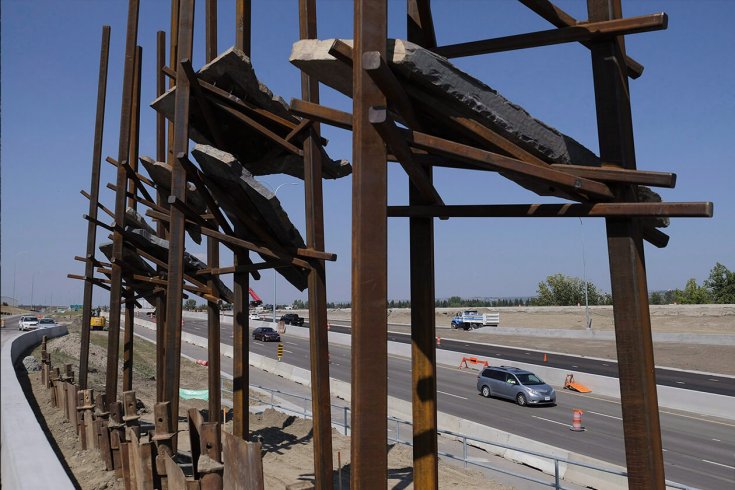 Canada has a long and complicated relationship with public art. Whether it’s the misshapen nude of Louis Riel in Manitoba or the thwarted Cape Breton Mother Canada statue, the public often struggles to understand such large-scale, open art—particularly when it generates feelings of immediate aversion. Calgary, for its part, has had an especially troubled public art history, with most of the public’s vehemence centred on a piece’s price tag, its corresponding artistic worth, and its perceived ability to represent the city’s identity. This year, for instance, Calgarian tax advocacy groups were incensed over the $33,000 cost for the RedBall Project—literally a giant red ball, which is considered the world’s longest running street project—that travelled through North American cities, including theirs. Before that, the public centred its palpable rage on the $470,000 “blue ring,” a large metal circle topped with streetlights on 96th Avenue, which even Calgary’s mayor Naheed Nenshi called “awful.”

Then, there’s Calgary’s latest public art investment, the Bowfort Towers, a $500,000 collection of rusty beams erected on the city’s west entrance of the Trans-Canada Highway. Calgarians didn’t seem to see the point. First, they responded angrily, calling it an “eyesore under construction,” misconstruing it as a paperweight. Next came the memes. The most popular one Photoshopped grilled vegetables over the beams’ stones—meant to “align with Blackfoot symbolism” of the four directions—turning the public art into giant kebab skewers. What’s more, said members of the area’s Indigenous community, who have criticized the piece as culturally insensitive, the sculpture also resembles traditional burial scaffolds.

In the court of public opinion, publicly funded art struggles at the best of times, and for many the Bowfort Towers marked an all-time low for aesthetic appeal, for meaning, for identity—for everything. It didn’t help that the city commissioned a New York City-based artist to produce it (although much of the sculpture was built and sourced through Calgary companies). Designer Del Geist, for whom Bowfort is one iteration of a series of similar pieces in other cities, has reported receiving hate mail for the first time in his career. “I’m getting hate mail because of you people. I’ve never had that in my life, in forty years of doing public art everywhere, ever,” he told the Calgary Herald. “It’s because of how the press is going for the sensation and stirring it.”

Geist also showed a startling inability to reflect on charges of cultural line-crossing, saying, in response to the mounting criticism: “I grew up in North Dakota amongst the Sioux Indians or Native Americans as they’re called over there, went to school with them, played basketball with them, the works. Their culture is what I’ve understood since I was born.”

And yet, public art has fulfilled its main functions—elsewhere and in Calgary—of creating a communal space, heightening tourist interest, and beautifying an otherwise utilitarian space. It has brought personality to otherwise unremarkable cities, street corners and public service buildings, giving them life, identity, verve. Take, for example, Chicago’s Cloud Gate or New York City’s Fearless Girl statue. Iconic examples of successful public art abound. Some of them also sparked controversy when they were first installed.

Back in Calgary, the Brotherhood of Mankind sculpture that sits outside the old Board of Education building appalled locals for its nudity in 1968, but is now a beloved part of the city’s downtown landscape, distinguishing it from other urban cores. On the University of Calgary campus, what was originally intended as a metal sculpture of a book’s pages flying open in the wind was lovingly thought of by students as the Prairie Chicken, under which we met our friends and lingered in the sun reading textbooks. We even love our collection of painted fiberglass cows, stationed across the city in 2000, because as Calgarians, we know cattle. We see them as a logical foundation for art-making.

Public art above all is supposed to reflect who we are, individually and collectively. When public funds are laid out for art that doesn’t represent us and we see the final tallies, we gasp in horror, believing that money could have saved jobs, or refugees, or the music program recently axed at the local college. Framed as such, it’s easy to see why Calgarians balked at the Bowfort Towers. Half a million dollars only to find nothing of themselves within it.

We often say art is not just something pretty to look at; it means something. That’s true. And, in this case, the Bowfort Towers didn’t raise ire just because it was ugly—even if we couldn’t articulate it, we knew it represented a larger conflict, at the heart of which was our very identity as a city, and the people within it. The Bowfort Towers unwittingly resembled a graveyard. It symbolized all our anxieties of not measuring up on the world stage. It reduced us to an unknowable entity.

Calgary occupies a strange space in Canada. It has all the trappings of a modern urban centre, but has yet to come into its role as an international city the way Toronto, Montreal, or Vancouver have. Add to that the perception that it’s a western monoculture, a product of its two primary industries, ranching and oil, and it has a long way to go on its quest to be cosmopolitan. Author and Giller Prize winner Will Ferguson has likened calling Calgarians rednecks to saying Vancouver is full of lumberjacks, yet the pejorative persists in mainstream media. The rest of Canada does not see us as we see ourselves, and we are often desperate to prove them wrong.

When you’re in Calgary, you feel the aspiration creeping into everything: gleaming new buildings, sophisticated martini bars, sports cars racing down the streets. I now live in Toronto (I know!), but I still visit my home city often. Whenever I do, I’m still shocked by its constant change. Last time, I not only found a vegan restaurant I could eat in, but discovered that it also remains, to this day, defined by a line-up out the door.

This aspiration is not new; it’s a deep-seated self-consciousness, a contradictory and yet stubborn combination of pride and change. In the 1990s, when Calgary was coming into another economic boom, concerted efforts to eschew its downhome identity could be seen everywhere. The boom brought a sudden movement of other Canadians and also international migrants into Calgary, and they were folded into new visions of what the city could be. Cowboy hats and country bars made way for ethnic restaurants, film festivals, touring musicals, and independent shops. Calgary’s arts scene thrived, despite others deeming it a “fly-over” city, to be avoided because of its apparently “redneck” audiences. When efforts to make Calgary a “global” city emerged at the policy level, many locals were perplexed: why bother?

But the city did it anyway. It established funding streams for local events, and it brought in international acts. After conducting studies on perceptions of Calgary and its western heritage, the city initiated a public-relations makeover designating Calgary as the Heart of the New West. Hospitality staff were encouraged to be more “modern” in their clothing choices.

Perhaps we hate the Bowfort Towers because it, in part, reveals something we’d rather not admit to ourselves. In a smaller, younger city like Calgary, the hope remains that artistic representation taps into what might remain of a collective identity. I’ve written about this at length in my own work, arguing that the reason country and roots music is so popular in Calgary is it acts as a salve against constant regeneration. It offers nostalgia, a sense of the past, as defense against newness. A city can’t keep giving itself makeovers until it is nothing but a gleaming hollow shell.

Calgary, as hometown author Aritha van Herk wrote, clings “to a back pocket idea that we are a city so contemporary that the history cupboard is bare.” What does that leave inhabitants to hold on to? Everyone needs a social history, a sense of collective struggle and belonging, to anchor us. Public art can offer that.

And so this culminates in the moment of the Bowfort Towers—a piece that should also be noted for its failure to properly converse in the Indigenous belief systems it purports to represent—resulting in a reckoning for Calgary and its inhabitants. Had the piece somehow spoken to Calgarians on a visceral level, had it clearly referenced Calgary’s storied history or contemporary reality, the reaction would likely have been different. For if public art does nothing else, it should productively engage and attract a city’s inhabitants. Public art often fails to have a point of contact for the average person; the controversy it can generate is certainly nothing new.

Yet at a time when both art funding and our confidence in its governance are diminishing, Calgary is forcing us to consider art’s role in public life, and how it can explicitly address a city’s needs in the face of an ever-creeping globalization. What does a “creative city” look like if its own inhabitants fail to find how they can engage creatively with the art and artists around them? How can we continue to bring the outside world into our cities, generating exciting new work, without losing sight of our collective identities, histories, and dreams? How can we stop, as van Herk states, using economic “prosperity as a guidepost” for creation when it overshadows the “grassroots stories” of those closest to the city’s genesis?

Jokes are often made about the hyperlocalism we now experience in the form of microbreweries, or community gardens. But we shouldn’t dismiss these phenomena offhandedly as quaint trends. They reveal a deep desire for connectedness and meaning where little is available. How can public art meet those needs? As someone who’s spent my life in the arts, I know the importance of highly conceptual creations, ones that require deep analysis and interpretation to fully understand, and how those creations can instigate large-scale, important paradigmatic shifts.

But I also teach courses on popular music and reject the mass/elite distinctions that still seem to plague public art and funding committee decisions. If the audience doesn’t understand or like it, we should trust them. They know more than we in the production realm give them credit for.

Calgary’s response must be the one we listen to. We should take the criticism of the Bowfort Towers seriously: the installation didn’t beautify the city in Calgarians’ eyes, nor did it offer them a renewed sense of who they are as distinct from Halifax, Victoria, or Toronto. It told them the city was embarrassed—maybe even ashamed—of who it is now. It told them the city’s priorities were focused outward, on drawing the world in, rather than allowing Calgary to express a unique self to outsiders who know little about it.

Let us instead learn to commission public art that acts as a thoughtful response to the everyday practices and experiences of its host city. Let our art tell us something about who we are and who we want to be at that moment in time.

Gillian Turnbull is currently writing Sonic Booms: Making Music in an Oil Town, a book on Calgary's music scene. She has written for The National Post, Hazlitt, and Penguin Eggs, and teaches at Ryerson University.
X