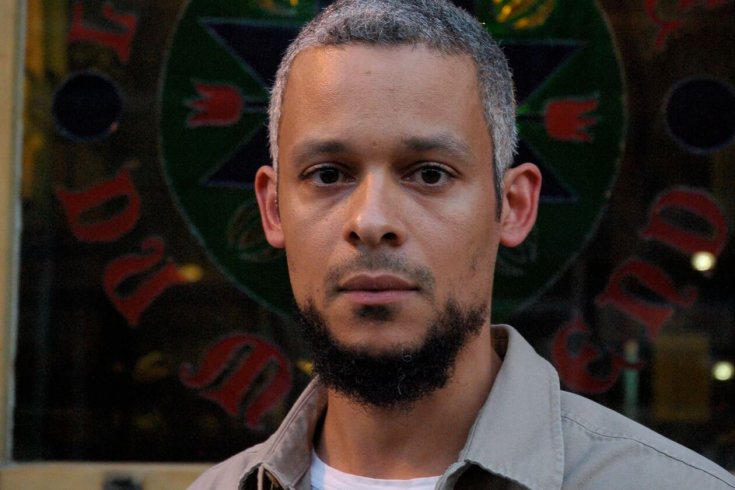 The natural title, you can’t help but think, would have been The Flying Canoe. It’s an image deployed repeatedly and multifariously in Kaie Kellough’s debut novel. With origins in Quebec folklore, it’s a link with history as much as a magical vessel for leaving history behind. The novel’s unnamed narrator, a homeless man who speaks for all the dispossessed and oppressed in modern-day Montreal—or who might just be paranoid—circles around it obsessively.

So why Accordéon? “It’s a beautiful word in French,” says Kellough, youthful at forty-two despite touches of grey around the temples. “I like that it has ‘accord,’ in the sense of how verbs work but also in the sense of people being in accord with others. Also, in Quebec the accordion has a real presence in folk music. And just the way an accordion looks as it’s played—it looks like a book. The way it unfolds and folds back in, like it contains infinite space.”

Kellough’s vision of the accordion as a book feels appropriate. Among the many cultural references in Accordéon, writers stand out. The book’s narrator is an omnivorous autodidact whose reading encompasses the ill-fated activist-intellectual Hubert Aquin; the pre-Quiet Revolution working-class Québécois experience of Michel Tremblay; the immigrant perspectives of Dany Laferrière and Rawi Hage; the avant-garde, politically charged feminism of Nicole Brossard and Nelly Arcan. All are outsiders in their various ways, all rebels within a culture that itself finds its definition in being an oppressed island within North America.

In invoking these Montreal iconoclasts, and aligning himself with the city’s tradition of experimentalism in fiction, Kellough is all but demanding that he be held to their collective standard. Remarkably, he proves himself worthy. He contains all that has come before him while keeping his eyes firmly set on the future.

Born in Vancouver, a first-generation Canadian child in a family with roots in British Guyana, Kellough grew up in Calgary at a time when that city had precious little experience with matters of racial diversity. “It’s the kind of place where you very quickly become aware of some kind of difference, and that becomes a continuous theme that you and others return to,” says Kellough. “It’s just very present in your life. It would be different now, I’m sure, but in the eighties and nineties it was difficult growing up there.”

Coming to Montreal at twenty-two (“I already spoke French, I was part of that generation of official bilingualism”), Kellough found himself in a city where a perfect storm of bohemia-friendly conditions—post-referendum economic doldrums and their concomitant comically low rents, venues all but begging for artists of any stripe to help drum up some business, a certain millennial-angst—made following one’s artistic impulses practically unavoidable. This was the era and milieu that incubated musicians such as Godspeed You! Black Emperor, Kid Koala, the early Arcade Fire, and most crucially for the still slightly stage-shy Kellough, a thriving spoken word scene.

An understanding of Kellough’s past as an experimental multimedia versifier is useful when coming to Accordéon, a novel bearing the only author bio in literary history to inform the reader that she is in the hands of a “word-sound systemizer.” The prose, rhythmic and laced with self-contradicting poetic repetition often verging on the incantatory (“People are not doing anything. People are doing everything. The business of life is at once insignificant and all consuming.”) would lend itself to public recitation but fends for itself perfectly well on the page. Where so much writing rooted in spoken word ends up neither here nor there, Kellough uses the form as a jumping-off point. Inherently musical, the language provides its own soundtrack.

“’Word-sound systemizer’ is my coinage,” says Kellough. “There’s a Jamaican expression, ‘word sound power,’ that the dub poet Linton Kwesi Johnson used in the seventies. I like it. In my thinking it means that you have to voice yourself. It’s through language and voice that one comes into being.”

For many years, at many mixed readings, Kellough would stand up and make his word sounds. It might be a series of bird-like vowel calls, or a stylized recitation of the alphabet, or a channelling of Duddy Kravitz as a beat poet. Sometimes the audience was ready; other times, maybe most of the time, it wasn’t. But no matter. Here was an artist working toward something, and now, later in life than most first novels, Accordéon looks like that something. “Initially I was determined not to write the sort of novel that one would expect a poet to write. You know, the kind where very little happens and the language is the site of all the action and is very precious. But I think I might have written it,” he says with a chuckle. “By accident.”

Approach it the right way and Accordéon can sometimes feel like the most event-packed novel you’ve ever read, its author’s concern about plotlessness notwithstanding. Kellough has devised a blueprint that lets his decidedly unreliable narrator be any given thing at any given time, even all things at all times. Thankfully for the reader’s sense of orientation, though, a fulcrum in time is provided by the student protests of 2012. Sparked by the Liberal provincial government’s announcement of a planned steep increase in post-secondary tuition fees, the massive unrest led directly to the defeat of Jean Charest’s ruling party. A little later, the Parti Quebecois’ proposed Charter of Values—a measure to bar the wearing of “conspicuous” religious symbols for all state employees—met with widespread opposition too.

“It was a very interesting time, very chaotic, where the dominant narratives were contested on a broad social level,” says Kellough. “It’ an exceptional thing when a social movement achieves a resonance across different age groups, across different neighbourhoods, for a sustained period of time. It toppled a government! It was a time to be very attentive to the culture.”

Attentiveness is something Kellough and his fictional downtown street monologuist don’t lack; though technically locked in one man’s mind, the novel is many-peopled and numinous, with a perspective couldn’t be more democratic. Street-level doesn’t quite capture it; this is more sidewalk level, as in literally right down on the sidewalk, nothing but a piece of cardboard between you and the concrete. The resulting kaleidoscopic view finds its mirror in experiments with form: certain words and passages in the narrator’s ongoing monologue are marked, as if with a highlighter by a theoretical reader, and explicated in sidebars by Ministry of Culture drones. “What have you been reading?” asks one drone suspiciously of another. “Your comments bear the identifying marks of politically engaged speculative fiction.”

Leonard Cohen is an especially pertinent example of that kind of fiction. Indeed, Kellough makes “energy of slaves,” from Cohen’s 1972 poetry collection of the same name, a prominently placed word-bite in Accordéon. “It’s just an incredible, and very perceptive and accurate, expression,” says Kellough. “It resonates. It makes me think of a finite energy that each person possesses. In a way, slaves are valued for nothing but their energy—that’s what they contribute, their labour. In Quebec, a society that traded in indigenous and African slaves, that energy was exploited. It was bought and sold, measured and consumed. It fuelled the society that we inherit, so that energy is part of our inheritance. It lives on.”

Taking his own place in a living inheritance appears much on Kellough’s mind. And that brings us back to the flying canoe. It’s on Accordéon’s first page, it’s on the last page, and so many times in between, in so many forms and roles, that it simply has to be addressed. The inspiration to use it, Kellough says, came from a passage in a Michel Tremblay novel where the canoe appears in a young boy’s hallucination. “It’s a powerful symbol for an island community,” he says. “The canoe can be seen as holding many different kinds of people, representing different contesting entities in society, with the canoe itself being the society.”

He could go on, you sense, but he resists the prodding. The flying canoe—which, like everything else about Accordéon, is best left to the reader’s imagination—looks set for a long trip.

Ian McGillis is the author of A Tourist's Guide to Glengarry. He is a regular contributor to the Montreal Gazette.