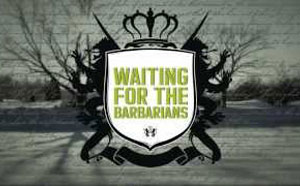 Waiting for the Barbarians, published in 1980, is South African author J. M. Coetzee’s third novel. At the outset, the text gives its reader few precise details: the date, unspecified; the place, a settlement on the frontier of an unnamed empire; the narrator and main character, simply “the Magistrate.” But, as reviewers at the time noted, a universalized South Africa emerges off the page: the book is an allegory of apartheid.

About two years ago, Russian director Alexandre Marine approached South African theatre veteran Maurice Podbrey with the idea of adapting Waiting for the Barbarians into a play. Marine was subsequently invited to Cape Town, where Coetzee—the 2003 Nobel laureate in literature—was born, grew up, and later taught. The play premiered in the city’s leafy southern suburbs last August. And now, a few months later, the production has come to Montreal, where Marine and Podbrey have both spent a great deal of time.

The story begins with the arrival of a representative from the capital. There is unrest, the audience is told, among the barbarians living on the Empire’s edges, and concern that the tribes are uniting and arming themselves. The representative tortures prisoners to extract confessions; the Magistrate is implicated when he enters into a confused relationship with a barbarian girl, then journeys to return her to her people. Fear takes hold and the society breaks down. Forces are sent to “sweep the barbarians from the valley and teach them a lesson they and their children and grandchildren would never forget,” but the soldiers give up, return to the settlement, then withdraw altogether. In the end, the Magistrate is left to preside over an all-but-abandoned town.

“One thought alone preoccupies the submerged mind of Empire,” Coetzee writes in an important passage near the end of the book, “how not to end, how not to die, how to prolong its era. By day it pursues its enemies…. By night it feeds on images of disaster.” It is here that the reader remembers the lines of the Cavafy poem from which the novel takes its title: “And now, what’s going to happen to us without barbarians? / They were, those people, a kind of solution.”

Over the phone from Montreal, Podbrey says he is delighted with the way Marine has captured the surreal quality of the novel. Podbrey, a member of the Order of Canada who has been commended for his contribution to English-language theatre in Montreal, also marvelled at the team that has been assembled: a South African cast, working alongside a Russian director and Russian composer (Marine’s twenty-eight-year-old son, Dmitri). After all, he noted, Coetzee’s novel is concerned with introspection or self-understanding, a classically Russian literary theme, and the author is known to be deeply interested in Dostoevsky—he is the protagonist of Coetzee’s grim 1994 work The Master of Petersburg.

Several years ago, Philip Glass adapted Waiting for the Barbarians into what he called a “social/political opera.” The work was first staged by the Germany company Theater Erfurt, and later brought to Austin, where Coetzee had been a grad student in the 1960s. In a review of the production, the New York Times observed that Coetzee’s allegory was interpreted “in a manner that suggested parallels to the current situation in Iraq—a provocative image in the city where President Bush served as Texas governor.” Is something similar going on with Marine and Podbrey’s play? The novel is, of course, still unsettlingly resonant: the other is demonized, torture figures prominently. Was Waiting for the Barbarians staged to register political commentary, or remind us of the persistent sinister forces at work? It’s tempting to make the inference, but the producer will have none of it.

“The story is always relevant and, unfortunately, it’s rather prophetic as well,” Podbrey says swiftly. “The whole notion of barbarians, who they are, and how we can be coerced by the powers that be into behaving in an inhuman fashion—this is a common idea. And it also has penetrated our own consciousness. We stoop very easily to prejudice and to treatment of other peoples with condescension.”

And so what effect does Podbrey hope the play will have on its audience? “Make them thoughtful, make them reflective on themselves,” he says simply. “Come away with some greater understanding. You know, a great evening of theatre. What else could there be? ”

Waiting for the Barbarians is running at Montreal’s Segal Centre through February 17, 2013.