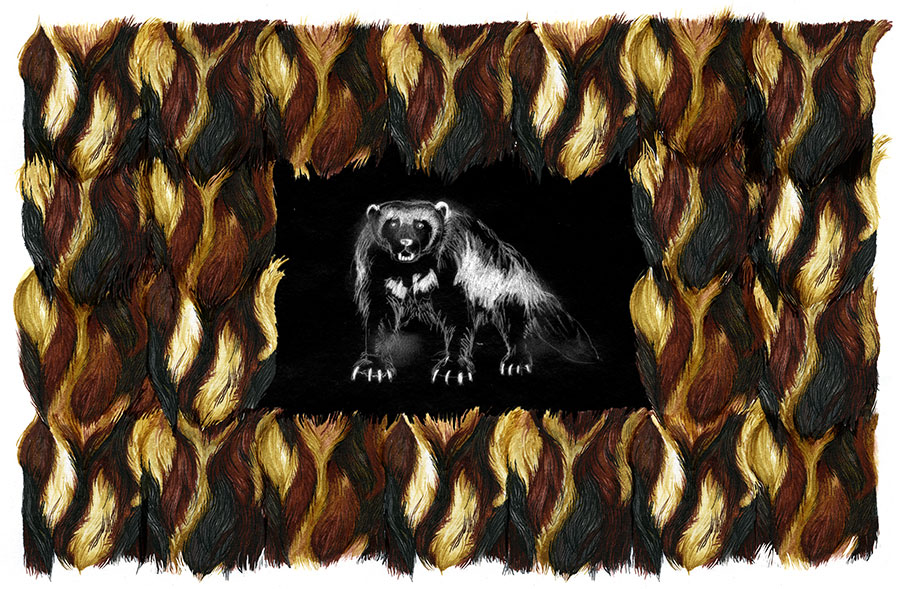 Cutting through the bush is tough on him this morning. No packed trails to follow, and in the shadows the snow’s deep. He’s not felt fear in a while, him. Something’s watching his movement. There’s no point looking around for it, though. It doesn’t want to be seen. Niska’s done this to him before, when she works her shake tent especially strong. She calls in the spirits of her dodems, her special animals, and they come to her. She’s asked them to do something, he figures. Maybe find out why the game is unhappy, if she or Xavier or his two boys have done something to insult them. Whatever’s watching doesn’t feel flesh and blood. Doesn’t feel physical. But that’s what’s scariest, isn’t it?

Back out on his second creek, with the sun bright and the walking easier, he feels a little better. He cuts up the bank and into the bush and checks his snares into the early afternoon. Nothing. Only a few fox and rabbit tracks. He almost doesn’t check his last few cubby sets as the afternoon gets late. He’s cold and needs to warm up. But the thought of the fisher, the slim chance that he might have gotten it, forces him up the bank and into the woods.

On a trail he’s had good luck with earlier in the winter, he spots the tracks. They make him stop, kneel down, and take off his mitts so he can trace a print. Without wanting to, he looks over his shoulder. It’s come back. After all these years. He stands and follows the steps to one of his traps, the spruce cubby torn apart, bits of wood and bark scattered about, the leghold sprung, its jaws clenched and empty. The fish guts he’d hoped would lure in a marten are gone.

He kneels again to verify what he already knows: Kikwaakew. A wolverine, a very big one by the size and depth of its prints, has come to take away what he has tried so hard to harvest. He travels farther down his line, and the next three traps are destroyed as well, the bait devoured. Kikwaakew has come to ruin his winter.

Xavier’s almost back to his camp before he sees that a fire’s been lit, the deep-freeze of the late afternoon turning the chimney smoke above his askihkan into a thick white line that hangs heavy above it. His sled dogs have returned and picked up his scent, baying out their greeting, pulling at their tethers to try and jump on him as he walks up to his door, grinning. His two boys have returned. They are safe, and they are here.

The three of them stay up late into the night talking, his twins full of stories. Three weeks ago, he had agreed to let them use his sled team so the boys could serve as runners between the Hudson’s Bay Company men and the trappers scattered over a few hundred miles.

“North of Albany, we came across a half-eaten moose,” Antoine tells Xavier.

“The kill was fresh,” Abraham adds. “Grey wolves.” Xavier watches as Abraham looks to him for approval. Abraham’s always been this way, needy of the constant nod to prove he is worthwhile. He came into the world a little bit simple. Despite the boys’ being identical, Antoine is the opposite in spirit to his brother, assured and self-contained, needing nothing from anyone. This is how he can tell one from the other when he is in doubt.

“We knew the wolves were close, because the carcass was still steaming,” Antoine continues. He pauses before telling the next bit. “I grabbed my axe and walked quick as I could, following their trail.”

“Father!” Abraham says, excited, jumping in. “Antoine chased down a wolf that was so full from the kill it couldn’t run from him. He brained it with his axe!”

Xavier raises his eyebrows at the story. Antoine looks angry that his brother has told the best part. Xavier watches as Antoine looks into the fire, biting his tongue.

“Perhaps, then,” Xavier speaks to Antoine, “you can help me brain something else.” He looks to Abraham as well. “I need the help of both of you.”

To continue reading, purchase this story from Walrus Ebooks.