Jack in the Box | The Walrus
Skip to content 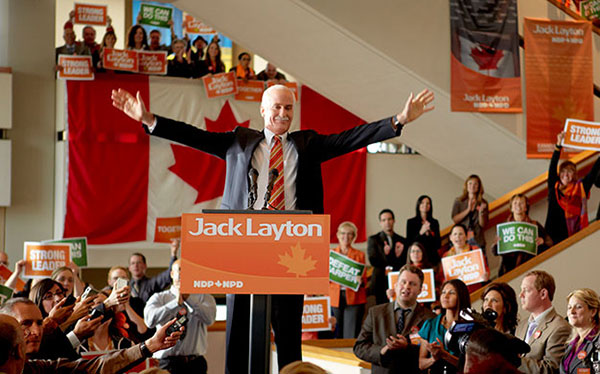 Jack Layton, on the 2011 federal campaign trail, standing before a crowd of supporters holding TOGETHER and WE CAN DO THIS signs, hospital-issue cane thrust into the air. With the NDP leader, fresh from hip surgery, already on his way to becoming leader of the Official Opposition, it was the very picture of triumph over adversity. He took to striking variations of the pose throughout the campaign, and his prop was soon dubbed the “victory cane.” Along with his trademark cookie duster, it would come to signify Layton’s hardscrabble spirit as well as his political gains, especially in the wake of his death from an undisclosed form of cancer on August 22, 2011. Within months, the cane had been selected by the National Post for a roundup of the year’s most memorable objects of “material history.”

Layton, cane above his head. It’s one of those naturally cinematic images: the kind you could cast in silhouette and run on a movie poster. Laszlo Barna, the Gemini-winning TV and film producer, had recently finished Wrath of Grapes: The Don Cherry Story II when Layton died. Amid the swell of public grief, the memorials that saw well-wishers scrawling farewells and cartoon moustaches in orange chalk at Toronto City Hall, and the pricey state funeral—unprecedented for an Opposition leader—Barna thought, “This is too big to pass up.” Meetings with CBC went well. (He likes to joke that he has so much industry clout that he can get a project turned down within twenty-four hours.) His collaborator, director Jeff Woolnough, calls it a “slam dunk” for them. With the blessing of Layton’s widow, Olivia Chow, the NDP MP for Trinity-Spadina, they got started on a script.

A few days later, CBC officially announced Smilin’ Jack: The Jack Layton Story, supplying stills of Roberts tucked in to his bald cap. Mercifully, the producers later ditched the cringe-inducing title, renaming it, simply, Jack. By the time you read this, it will have been sixteen months since Layton’s passing, and Jack will be “coming soon” to your local CBC affiliate, perhaps in the cherry-picked time slot after Coronation Street. Then all that will stand between viewers and ninety minutes of Rick Roberts in two hours of hair and makeup will be the nagging feeling that maybe it’s too soon for a Jack Layton movie.

“People have short memories,” Barna offers, over the phone from Arizona, where he is decompressing after Jack’s breakneck month-long shoot. From the beginning, he says, both his and CBC’s approach to Jack was “sooner rather than later,” and that they aimed to air the film while the story remained at the front of people’s minds. It’s what he calls “event television.” As he explains, “People want to know what happened. What is it like when you reach the summit and death comes calling? ”

While it may seem cynical for a movie director to look at a public figure downed by cancer and light up, the overwhelming impression given by all involved is one of sincerity. They didn’t set out to exploit raw-nerved public sentiment regarding Layton’s memory, but rather to acknowledge it. Woolnough describes the crew choking up while watching certain scenes via the on-set monitor. Lee recalls that a prop guy who had lost his mother to cancer found truth in Layton’s story. Roberts speaks to its inherent drama, comparing Layton to “a florist who dreamt of opening a flower shop, and did it against all odds, but then died before he was able to reap the rewards of his success.” Barna says he saw the project as an opportunity to explore why Canadians connected so deeply with the politician.

Lee finally cuts to the chase: “I don’t really understand when people say, ‘It’s too soon,’” she says. “Too soon for what? ”

It’s a good question, one that might reasonably be answered by the usually private Chow. She was convinced to sign over the rights to her husband’s story (which is, of course, also her own to a large extent) by Barna’s track record: he produced the film version of Roméo Dallaire’s Shake Hands with the Devil as well as the 2008 Céline Dion biopic Céline. “I checked the producer and noticed that he’s very professional,” she says during an interview at her office in Toronto’s Kensington Market. “He seems very genuine in wanting to tell Jack Layton’s story.” Even if one takes into account syntactical idiosyncrasy (“Words are not her dexterity,” offers Lee), Chow’s frequent reference to “Jack Layton” is as good a sign as any that Jack is not so much a movie about a man as a movie about an idea of a man.

In his book History by Hollywood, Robert Brent Toplin points out that there was little public interest in General George S. Patton before George C. Scott played him as a hard-nosed American hero in the 1970 film. Of course, Patton had been dead for a quarter century by the time Francis Ford Coppola and Edmund H. North wrote the screenplay, which they based largely on two respected biographies. Similarly, Spike Lee’s 1992 biopic Malcolm X was informed by the long-deceased activist’s memoirs. Even CBC’s 2002 banner miniseries, Trudeau, aired after the titular PM’s political legacy had already been enshrined in high school history books, a matter of public record rather than dramatic invention.

Jack, by comparison, is ripped from yesterday’s headlines. It canonizes a moment that is still playing out. Layton’s closest Hollywood historical analogue, in this sense, is George W. Bush, whom Oliver Stone memorialized onscreen while the ex-commander-in-chief was still in office. W. feels as if it might have been focus-grouped by public sentiment, tailored to the American people’s fascination with its subject. It plays like a two-hour-plus Saturday Night Live sketch, more an impression of Bush’s career than a study of it.

Jack promises the same kind of impressionistic hit, albeit played for waterworks instead of W.’s schadenfreude. It has the makings of a rough sketch of a hero for a nation of Everymen (or Everypersons), just “an ordinary guy to have a beer with,” as Chow puts it. For all of Stephen Harper’s effort to show up at Olympic hockey games in a tailored jersey, he doesn’t possess this man-of-the-people charm. Lord knows, Michael Ignatieff didn’t have it. Layton’s reach extended well beyond his party’s sixty-six-seat gain; when Roberts was cast in the lead, even his diehard Conservative parents assured him, “Everyone likes Jack Layton.”

Herodotus, the so-called Father of History, posits that historical inquiries are animated by the twin aims of preservation and causation. Think of Jack as an exercise in the former. As such, it’s not too soon, but rather just in time, almost like a second state funeral, a television event that marks the passing of Jack Layton into “Jack Layton.” Ten or twenty-five years from now, when his legacy can be properly, exhaustively, unsympathetically dismantled, Jack could very well constitute an object of material history as emblematic as the man’s victory cane.