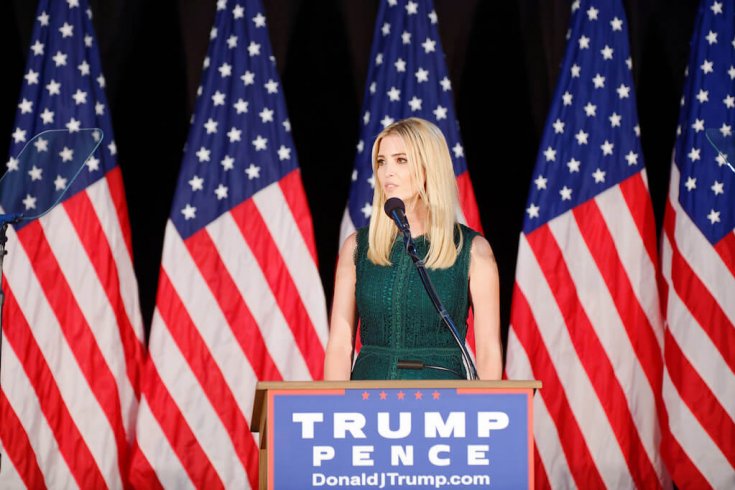 Last week, Ivanka Trump secured her own office in the White House and began undergoing security clearance. Ivanka has of course been present in both her father’s presidential campaign and in his fledgling administration, and her White House office seems to make that official. Except that, in fact, she has no real job there, and no official role.

When Donald Trump was declared winner of the election in November, many people looked to Ivanka and her husband Jared Kushner as potentially moderating influences. After all, both Ivanka and Jared were previously Democrats—surely they would push back on cutting social services? And both were Jewish—surely they would push back on the white supremacy pervading his inner circle? Maybe it won’t be that bad, we thought; maybe Ivanka and Jared will be our whisperers, avoiding the dismantling of American democracy.

As the last two months have shown, we were wrong. She might have an office, but Ivanka will not be our redeemer. Ivanka has said nothing about the following: a chilling inauguration speech reusing the “America First” 1940 campaign slogan of Nazi-sympathizer Charles Lindbergh; the appointment of an unapologetic white supremacist as his closest advisor; an illegal ban on immigrants and refugees from Muslim countries her father does not do business in; a statement about Holocaust Memorial Day that deliberately didn’t mention Jews; calling into question the entire judiciary’s ability to make objective judgments; questioning the intelligence community’s unified conclusion that the Russians interfered in the election, and then obstructing inquiries into his campaign’s ties to the Russian government; attempting to repeal health care for millions of Americans; rolling back environmental regulations; and the countless smaller ignorances and micro-aggressions Trump has perpetrated.

Ivanka has said nothing because that’s not the role she has chosen for herself.

Ever since the election, all I can think about is the story of the Jewish holiday of Purim, which Jews around the world celebrated earlier this month. Observance of the holiday, the story of which is recounted in the over two-thousand-year-old Biblical Book of Esther, consists of chanting the text of the story aloud in synagogue, giving gifts of food to friends and to the poor, drinking and feasting, and wearing costumes. But the Purim story itself—a tale of capricious authority and persecution—has an eerie resemblance to the Trump administration thus far.

In the original story, long ago in Persia, King Achashverosh, a bumbling drunkard foolishly swayed by the counsel of anyone nearest him, chose a woman named Esther to be his new queen. Unbeknownst to him, Esther was Jewish. The King’s advisor was the capricious, evil, and arrogant Haman, who paraded about the empire and made everyone bow to him. Esther’s uncle Mordechai refused, so Haman asked the King to kill all the Jews as punishment. In the end, Mordechai convinced Esther to reveal her true Jewish identity to the King, and she begged the King to spare her people. Horrified that he had approved of a decree to kill his wife and her people, King Achashverosh had Haman and his family executed instead, and the Jewish people of Shushan, Persia were saved.

Ivanka is cashing in on her newfound spotlight, launching product lines instead of criticisms.

This local victory was given theological significance and made by community leaders into a worldwide Jewish holiday, ritualizing the timeless Jewish experience of persecution—except that unlike other instances, it’s a celebration because this story has a happy ending.

The bumbling king of President Trump. The evil henchman of Steve Bannon. The Jewess in the palace, as Ivanka moves into the White House. Sweeping, seemingly random decrees based on personal vendettas and ignorance. I’m not the only Jew this year to feel the eerie resonance between the Purim story and the Trump administration.

Except when it comes to Ivanka, the comparison is not quite right. If you are an American Jew who is comforted by the fact that the Jewish Ivanka Trump and Jared Kushner are in the White House, I must say plainly and emphatically: you are wrong. Ivanka is not our Esther. Esther saw the bigger picture, and the need to intervene. She understood that because she uniquely had the king’s ear, she was the only one who could change the evil decree the people faced. She risked her own life, let alone her reputation and brand, to prevent the massacre of her own people.

Ivanka so far refuses to do that for the American people. As Frank Bruni of the New York Times and even Saturday Night Live recently observed, Ivanka is more alibi than conscience, more complicit than curtailing. Her brand is, according to SNL, being “the woman who could stop all this, but won’t.” She’s cashing in on her newfound spotlight, launching product lines instead of criticisms.

No, the metaphor doesn’t work. And this is the insight of the Purim story this year: We are all Esther. This is what has driven my own response to the Trump administration, as I’ve tried to navigate my role as an American now making my home in Canada. It’s a perspective I’ve tried to instill in students and congregants, ex-pats and Canadians alike, as we try to make sense of a political situation that defies logic.

We are all Esther, because, just as in the Purim story, the target of today’s decree could be any one of us. Last month the Muslims, this week those with pre-existing conditions, next week who knows. Thus, the need for solidarity has never been more apparent.

In a development perhaps more surprising to those outside the Muslim and Jewish communities than inside, in a beautiful and sad mutual understanding, these two communities are stepping up to protect each other. After hundreds of bomb threats to Jewish Community Centres since January—some of which have, shockingly, been attributed to an Israeli-American teen—and the desecration of Jewish cemeteries in Philadelphia and St. Louis this month, several Muslim groups raised tens of thousands of dollars for repair. And after a white supremacist murdered six Muslims at prayer in a mosque in Quebec City, the Toronto Jewish community reached out to their Muslim neighbors and arranged “peace circles” of solidarity and protection during Friday prayers.

That November morning after the election, a phrase from the Book of Esther, from the text of the Purim story, arose from my memory. It has always been a favorite, but it interrupted my anguish and fear that day with another lesson. It was the message Mordechai sent Esther to convince her to intervene with King Achashverosh to save the Jews:

Do not imagine that you, of all the Jews, will escape with your life by being in the king’s palace. On the contrary, if you keep silent in this crisis, relief and deliverance will come to the Jews from another quarter, while you and your father’s house will perish. And who knows? Perhaps you have attained this royal position for just such a crisis.

We should not imagine that even if we avoid being targeted by the Trump administration this week, we will remain safe next week. We must unite together to intervene. For who knows—perhaps we are who we are in this moment for just such a crisis.

For Ivanka, time will tell if she decides to use her position to intervene, but her past behavior makes that possibility unlikely. Although, Ivanka, if you’re listening: I would like to be proven wrong.

Julia Appel is an American–born rabbi and educator living in Toronto.