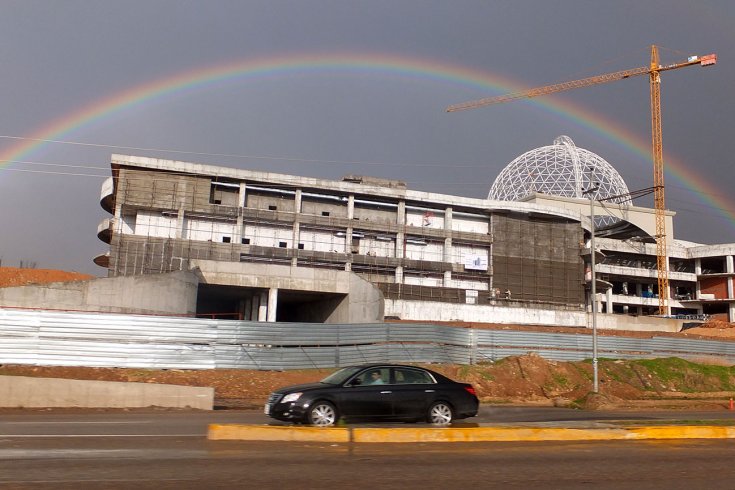 The mosque up the street shares the ground floor with a furniture shop that sells white leather couches and goose-down duvets. Outside, jeeps with roof-mounted machine guns are parked next to old men in black-and-white turbans hawking pomegranates.

There is not usually this much security.

“Sulaymaniyah is safe—not like the rest of Iraq.” That’s what I’m told before signing a month-long contract with an international NGO based there, at the end of 2014.

Three days after I arrive, a suicide bomber drives into the main government complex in Erbil, the Kurdish capital, and explodes. Five people die—six if you count the bomber. But people don’t.

It is Kurdistan’s first bombing in months—not counting all the smaller ones. People don’t.

It’s a running joke at the NGO office. If a report is late, blame ISIS. A project isn’t finished on time—ISIS. When the driver pulls the NGO nameplate off the dash, a couple of hours into the drive, I look over. “ISIS? ” He grins. I grin. But this time, it turns out, he is not really joking.

A lion cub lives here too, gifted to a wealthy Kurdish wife who refuses to think about what will happen when “Leo” gets a little bigger. Right now, he’s as soft as cotton balls and a foot long.

A tiny shop inside Pax City sells Snickers, Coke, and Kraft Singles, alongside Kurdish cheese and flatbreads. Across the street, past Pax City security, there is a fruit-and-vegetable man who has set up shop in a half-built concrete house. At night, a lone light bulb, jerry-rigged from a low tangle of wires, casts a dull glow over the oranges, aubergine, and onions. A little further, past the mosque and machine guns, is City Centre, an immaculate four-story mall where boys in matching chef smocks offer shoppers samples of French brie and Turkish olives.

It is a two-hour drive from Pax City south to Khanaqin district where the NGO ran training programs for Iraqi women—until ISIS got too close. I’m making the trip to meet the women and evaluate the success of the training.

Just before Khanaqin, I start noting black flags—the kind ISIS likes to use. They flap above the mud-walled compounds and hang like bats over the main street.

The women are gathered in a mud-brick home in a quiet residential area. There is a black flag draped over the gate. All the houses on this dirt street are flying black flags. “Those aren’t for ISIS,” says the driver, who speaks little English. “Don’t worry.”

There is no furniture in the house, only carpets, a vase full of red-cloth roses, and a poster of Mecca.

The women, who took beauty-salon training, sewing, and business courses, are sitting on the floor, their long, sparkly dresses pulled over their knees. Everyone is talking at once, while the translator tosses out snippets. More training. English classes. They want to learn to drive. “I have been saving,” says a woman wearing a black headscarf with shiny gold sequins. “But what is the point of buying anything for my family, when we will just have to leave it all behind? ”

There is a bang outside. Then shouting.

ISIS is close, says a young woman, seven-months pregnant. “But please restart the training. We are still trying to live.”

Beyond the gate it is beginning to sound like an angry parade. There is smashing metal, and what could be fireworks—or shots. Men’s voices grow louder. Shouting. Chanting. The driver peaks his head through the door. “Let’s go.”

This trip was supposed to happen a week ago, until an improvised explosive device, or IED, was discovered under the main bridge leading to Khanaqin. A few days later, the trip was called off again. This time, Kurdistan’s security force, the peshmerga, had begun an offensive to push back ISIS.

It was postponed once more, when the peshmerga won. The people of Khanaqin were celebrating by shooting off machine guns. “In Iraq, everybody has a gun,” the NGO security manager explained. “We always celebrate by shooting—four or five people usually get killed.”

Outside, the shouting and shooting appear to mark the beginning of another celebration. The driver throws the car in reverse and backs around a corner, away from the mob. We are heading out of town, away from Sulaymaniyah and Pax City. The driver still needs to pick up staff at a camp for internally displaced Iraqis, past Khanaqin.

Our car crawls through an intersection clogged with tanks, vegetable sellers, and goats. “ISIS,” says the driver, pointing down a dusty road to his left. “Two minutes.”

The rows and rows of white tarp tents sit in a dusty patch of desert behind a chain-link fence. The camp, for Iraqis and Kurds fleeing ISIS, was designed to hold 2,000 people. There are more than 10,000 living here. Eyes turn to watch the NGO vehicle crawl past, its nameplate back on the dash.

The faces look familiar. I’ve seen them before, in Sulaymaniyah, inside Iraq’s sole war crimes museum. There, next to a primitive electric shock apparatus and clothing fragments from chemical weapons victims, is a wall of photographs. Pictures of women carrying malnourished babies, old men in tired turbans, and children playing in mud outside makeshift tarp homes—some of the hundreds of thousands of Kurds displaced and killed during Saddam Hussein’s brutal ethnic cleansing in the early 1990s.

“In Iraq we are always fighting about something,” says Iyah. “Nothing is ever stable.”

Iyah lived four hours southeast of Khanaqin, until ISIS uprooted his family. “We had three houses and ISIS destroyed them all,” he says. “Imagine your whole life, everything you’ve built up—gone.” Now, Iyah works for the NGO, registering internally displaced Iraqis, like himself.

“Most Kurds don’t hate ISIS,” he says. “ISIS is helping.”

Iyah is still wrapping up paperwork, when the rice truck begins its nightly rounds. Women with dented pots and little kids with plastic plates jostle for a steaming spoonful. The driver’s cellphone rings. It is the security manager calling from Sulaymaniyah. It is twilight and we should not still be in Khanaqin. NGO protocol doesn’t allow staff on these roads in the dark.

Driving past the black flags at dusk, I ask Iyah and his co-worker Umed about a government official we met earlier in the day—an established community leader who credited ISIS for his paycheque.

“People don’t hate ISIS anymore than they hate the Iraqi government,” says Umed, who spent much of his life in England, forced to flee Iraq after his sister was shot dead while protesting Hussein’s brutality.

The Iraqi government, at loggerheads with Kurdistan over oil rights, cut transfer payments to the semi-autonomous region in early 2014. The impasse lasted close to a year and meant most Kurdish government workers, the peshmerga, and teachers didn’t get paid—until ISIS got close.

As the Iraqi army buckled under ISIS advances, the Kurds gained ground, garnering for the peshmerga international aid and allies, including the Pentagon.

It’s dark. A lorry lumbers past, hauling a tank. There is one more mountain pass with a long, unlit tunnel. At its mouth, peshmerga in fatigues stop our vehicle. They lean in the car window with machine guns and flashlights, see a foreigner and wave us through.

ISIS has done more for Kurdish independence than the past decade of struggle, says Umed. “Fighting ISIS, we are expanding Kurdistan’s borders. Every city and district the peshmerga take from ISIS will become a future fight with Iraq, because when we take each new region, we now see it as ours.”

The lights of Sulaymaniyah appear in the distance, the neon blue space needle, the amusement park’s brightly lit Ferris wheel.

The trip back was just two hours, but driving through the gates of Pax City past little children playing soccer, the black flags, white tents, and anti-aircraft guns suddenly seem a long way off.

“You can’t be scared,” says Umed. “How can you be, if you want your children to keep playing in the streets? ”

Genesee Keevil (@GeneseeKeevil) is based in Whitehorse and covers national and international stories.