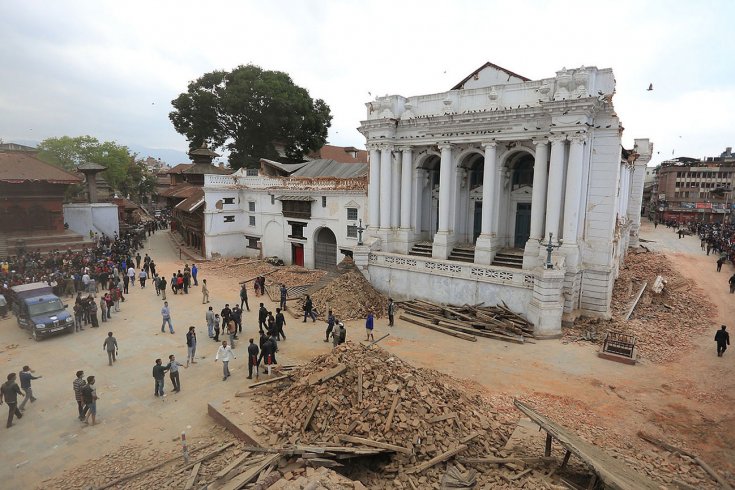 In Toronto on Tuesday I was poring over posts on Facebook about the Nepal earthquake when a message popped up: “Disasters Happen.” It was the Red Cross wisely instructing to “Know the risks, make a plan, get a kit.” After all, it’s Emergency Preparedness Week in Canada.

Following the April 25 earthquake, Nepalis have had to learn the value of preparedness in the most painful way possible. In the aftermath, Pushpa Acharya, a Nepali friend at the University of Toronto, observed, “Knowledge was not our problem.” Indeed. We all knew that our country sits on an active fault line, where the subcontinent collided with the Eurasian plate with such force it created the Himalayas. The last big quake took place in 1934. Others have since struck, but none with the force of 1934’s 8.0 or April 25’s 7.9. We knew that a big earthquake was due.

It was our duty to prepare, and though some of us did so individually, as a society we ignored the warnings. In the past ten days, during search and rescue, and then the beginnings of relief, we’ve had to do some hard thinking about how our country could become more responsible going forward. The root problem may seem obvious: Nepal is one of the poorest countries in the world. Its poverty is, however, a symptom of our history of ill governance, and the reason for our national failure to prepare, which has kept us from becoming a functioning democracy.

When the earthquake struck, the country was in a deep and deeply depressing stupor. The governing parties—a coalition of the Nepali Congress Party and the Unified Marxist Leninists—had reached an impasse with Nepal’s thirty-three opposition parties about what kind of constitution to draft. There was no plan for the country as a whole, let alone in the case of an emergency. The drafting of a constitution has preoccupied, confounded, and eluded Nepal’s polity since 2006, when the Maoists ended a ten-year insurgency to join forces with other parties to remove Gyanendra Bir Bikram Shah. Nepal’s king had used the war as an excuse to end a fragile fifteen-year spell of democracy and install his own military-backed rule. A mass movement restored democracy, and the subsequent peace process promised to restructure the country along just and equitable lines through the drafting of a new constitution.

Hope soared, and for a while a freshly reimagined Federal Democratic Republic of Nepal seemed imminent. In 2008, an elected Constituent Assembly ended the 240-year monarchy, and brought historically under-represented communities into government through proportional representation. Women have always been second-class citizens in Nepal, with fewer legal rights than men. But with 33 percent women elected to the Constituent Assembly, it was the first time in my life that I felt represented by my government. Other long-marginalized groups—including Dalits, or the castes traditionally considered “untouchable” in Hinduism, as well as indigenous communities and historically neglected regions—also saw hope for being included in the state through federalism and the creation of state government. The hegemony of high-caste hill men, who constitute only 15 percent of the population, was set to end.

But for many political leaders, the vision for a New Nepal was more aligned with the remnants of the Old Nepal. Opposition parties refused to vote on legislation for a new national charter; the Maoist army was integrated, in a slapdash manner, into the national army; truth and reconciliation never got off the ground. In 2012, the Constituent Assembly failed after differences over federalism became intractable.

In a country that could ill afford to waste time, a second Constituent Assembly was elected in 2013. The Maoists lost, and the Nepali Congress and UML formed a coalition government. A slipshod truth-and-reconciliation mechanism has since been set up, and a few smaller disagreements have been resolved, but there has been no agreement on the issue of federalism. Only five of seventy-five district borders remain disputed, but none of the parties will compromise. “Party Leaders Fail to Reach Consensus” has been a recurring newspaper headline for years.

What stood before the earthquake was a government in paralysis with only the barest state structure—the bureaucracy, the security forces—operating as if on autopilot, unresponsive to even the most urgent demands from the people. So absent was political leadership that Prime Minister Sushil Koirala, out of country for a meeting, reportedly learned about the earthquake from a tweet by India’s Prime Minister Narendra Modi.

Natural disasters are compounded by manmade ones, and Nepal’s politics have been a pre-existing disaster. The political vacuum made search and rescue chaotic and rudderless in the critical first days. NGOs, the security forces, the bureaucracy, and foreign governments and aid organizations had to scramble with little or no guidance from the elected government. Coordinating relief remains extremely challenging.

For Nepalis who believe in democracy, who in 2006 wanted and who now still want a just, equitable New Nepal, this is a stressful time—a time of warding off our worst fears to focus on the immediate task of relief in a way that supports our fragile democracy. Almost everyone I know in Nepal, as well as in the Nepali community in Canada, has pitched in with fundraising, information gathering, organizing, or on-the-ground relief. But our minds race ahead to what comes next. Rebuilding isn’t just about the daunting task of ensuring food, shelter, clothing, and livelihood are available. The final numbers aren’t in, but the best estimates place more than 10,000 dead and up to eight million affected. Nepal’s mountainous terrain makes logistics difficult at the best of times. And the monsoon season is fast approaching, with possible floods and landslides making the areas most affected by the earthquake even more inaccessible. It’s unlikely that relief work will be completed before the rains start. Proper rebuilding can take place only afterwards, this autumn.

What are the chances that emergency preparedness—both individual and collective —will be part of this process? We know that it should be. But again, knowledge is not the problem in Nepal. The chasm between understanding the need for emergency preparedness and actually preparing is wide. The communities that were affected, and in many cases, decimated, need to be reconstructed as safe examples, and the rest of the country must follow. Nepal will need help with that.

The country will also need help reconstructing itself with democracy at the centre, at the states, and at the grassroots. There are, as we have seen, dire consequences to wasting time. Relief work would have been far smoother had elected state and local governments been in place. The political parties must reach a broadly acceptable consensus on federalism and draft a new constitution.

Some days this feels like too much to hope for, but hope we must; and hope we do, when the desire to help following the earthquake has been so strong. In country and abroad, Nepalis have surpassed the political leadership, not just organizing relief when it was absent, but also spearheading a robust conversation about what is and isn’t effective and constructive in supporting rescue, relief, and rebuilding. Those living in Toronto continue to support charities in Canada, the government in Nepal, and small grassroots organizations in Nepal such as AYON, a youth network who have worked as first responders, and ABARI, who have put together low-cost tents using local materials.

Whether working with Nepal’s government or bypassing it entirely to support people-to-people initiatives, Nepalis around the world have the same goal: to help the country rebuild as a functional and responsible democracy from the shards and fragments of this disaster.

Manjushree Thapa is the author of several books of fiction and nonfiction about Nepal, including Forget Kathmandu: An Elegy for Democracy.