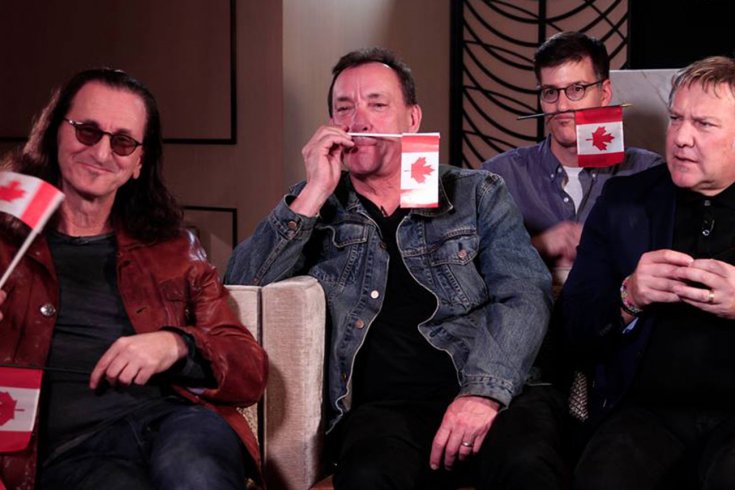 Being Canadian director Robert Cohen, third from left, with the band Rush.

There have by now been enough attempts to definitively peg Canadian identity that the best answer to the query “What makes me Canadian? ” might well be that the questioner feels obliged to ask it in the first place. Certainly, far loftier figures than comedian Robert Cohen—whose new film Being Canadian premieres this year at Toronto’s Hot Docs festival before going On Demand with Rogers Television on April 26—have puzzled over the social, political, and aesthetic dimensions of the Canuck mindset. But, as it takes the better part of a semester to properly parse Margaret Atwood’s Survival and just over ninety minutes to watch a documentary, Being Canadian will attract those who’d like this argument cornered in a hurry. And hey, if the rhetorical points can be scored by household-name movie stars and musicians, all the better.

Cohen, a sitcom writer who followed his industry peers’ well-travelled road to Los Angeles—where he got gigs on shows including The Big Bang Theory and The Simpsons—has opportunistically inserted himself into the genre of the “personal documentary,” in which the director places him or herself front-and-centre, essentially turning the act of non-fiction filmmaking into a star turn.

The press notes for Being Canadian ask viewers to imagine “Sherman’s March in a toque”; the reference is to Ross McElwee’s 1985 documentary, a seriocomic masterpiece in which the director self-deprecatingly likens himself to the eponymous Civil War general, except his own cross-country campaign comprises a series of failed romantic skirmishes. A landmark production that skillfully interrogated issues of authenticity and artistic narcissism, Sherman’s March might be the Platonic model of the personal documentary—a hard-fought journey over treacherous interior terrain.

Cohen’s film, which also takes the form of a road trip—he tours the nation in a red-and-white van—is more accurately described as a victory lap. Its narrator’s concerns about his Canadianness after a decades-long sojourn in Hollywood may be genuine, but they play as wholly disingenuous, a flimsy pretense for a guy who has worked behind the scenes to show us exactly how many famous people he has in his contacts list. These include, among many others, Mike Myers, Alanis Morrissette, Martin Short, Eugene Levy, and Dave Foley (who incongruously provides his commentary while naked in bed with Cohen, which is a schoolyard gay joke but a decent rib on the visual conventions of talking-head documentaries).

Being Canadian’s structure is simple: in between scenes of Cohen driving across the country from east to west—toward the manifest destiny of a Canada Day celebration in British Columbia—the stars wax philosophical on the topics provided by their interlocutor, which include whether or not Canadians are naturally funny, why we are more welcome in foreign countries than Americans, and if there is such a thing as national cuisine.

Suffice it to say that these testimonies are exactly as biting and insightful as you’d expect, but the point is not that Being Canadian is too lightweight to qualify as serious cultural commentary. It’s that its willful silliness (a quality distinct from actual funniness, of which it features precious little) is itself suggestive of what its creator cynically assumes Canadians actually want to hear about themselves—namely, that everything is great and that there’s nothing in 2015 that we shouldn’t be proud of.

Being Canadian is ostensibly set over ten days, but its countdown gimmick is patently phony. When Cohen gets to Ottawa, he carps about the weather going wobbly as we see shots of a frozen-over Rideau Canal—supposedly in the last week of June. Right. Even more telling, however, is the speed with which Cohen glosses over Maritime history, name-dropping “the Mi’kmaqs” in a hasty introduction, and then dropping Indigenous culture for the rest of the film. He has time to stop for roadside beers while hurtling westward but not to veer into the Northwest Territories, Nunavut or Yukon. The section rehashing lame one-liners about the country’s weather (summary: it’s so very cold) might have been better served by a detour to the far north, no?

Cohen mentions French-Canadian pride during his stop in Quebec, but quickly digresses to focus on a maple-syrup heist that he frames as one of the most significant events in recent Canadian history. It gets more screen time than the October Crisis, which warrants a mention of “terrorism” and not much more context than that. Quebec separatism gets soft-pedalled overall, with a few comments from the interviewees about how much nicer it would be if the country stayed together, but no examination of why so many French-Canadians might feel alienated within their own province and the country as a whole.

Toronto of course gets a thorough exploration as the epicentre of the entertainment industry, which is where Cohen’s heart lies anyway. But when the director gets to his native Calgary, he can’t conjure anything more resonant than Mounties rehearsing manoeuvres to the triumphal strains of Rush. The repetitive script piles on ersatz anxiety, with Cohen wondering aloud (over and over again) if he’s on the right track with his project.

But nothing is at stake, and the conclusion he reaches in Vancouver—spoiler alert: Canada Day celebrants look a heck of a lot more diverse than they did twenty years ago—is cynically manipulative in a film that features 85 percent white interview subjects. It’s also so patently obvious. Simply perceiving a sea of non-white faces is different than understanding how and why those demographics have shifted over the decades.

Cohen would probably claim he’s a comedian first and a sociologist last, which is true enough and yet not satisfactory in dealing with a film as vapid as this one. Being Canadian reifies stereotypes under the guise of deconstructing them, and panders to the pernicious idea of celebrity authority (with a few experts and plucked-from-the-crowd civilians sprinkled in for good measure).

At one point during his stopover in Ottawa, Cohen shows up at 24 Sussex Drive to interview Stephen Harper, to no avail. The joke is supposed to be at the expense of the amateur documentarian not calling ahead, or perhaps that the prime minister’s media availability resides beyond the purview of even puff piece journalism. When Michael Moore pulled similar stunts in Roger and Me, it was because he was actually chasing after his chosen corporate avatar’s accountability. Cohen is content to find nothing because he isn’t really searching for anything—he’s just goin’ down the road to nowhere.