Internet Made the Poetry Star | The Walrus
Skip to content 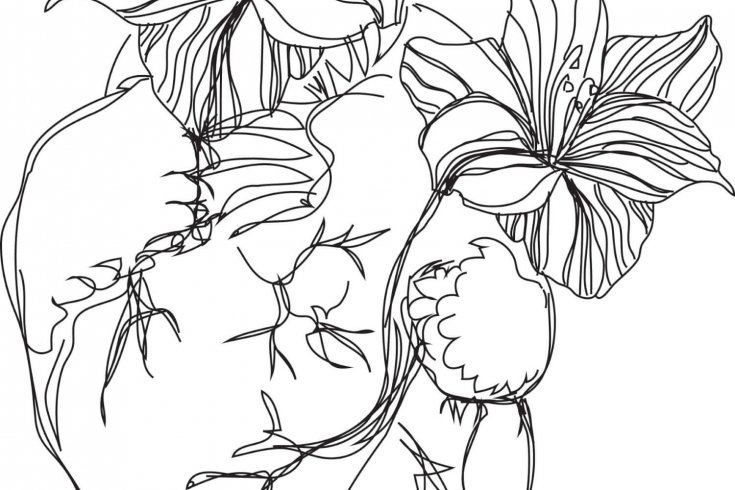 Hundreds of people, mostly women, gather at the base of a spiral staircase inside an Indigo bookstore in downtown Toronto. They are here to see Rupi Kaur, a twenty-two-year-old poet whose art is ricocheting across the Internet. The crowd quiets as a thrumming sound from the loudspeakers on either side of the stage fills the room, then Kaur, wearing a white dress and her thick black hair coiled on top of her head, begins reciting her poem Broken English. The glaring lights and the noise of people milling about in the hallway of the Manulife Centre clashes with the lilting beauty of her words and the fluid expression of her gestures. But the people filling the seats clutch copies of her book and listen spellbound.

When she was three, Kaur emigrated with her mother from Punjab, India, to join her father in Montreal. Since then her family (she is the eldest of five children) has lived in a dozen places, and only recently settled in Brampton, Ontario. In high school she performed for her first large audience, reading a poem about the 1984 anti-Sikh riots at a commemoration ceremony held by the local Sikh community. Initially resistant to publishing her work online, Kaur turned a corner after she came across the work of Kenyan-born, Somali–British poet Warsan Shire on her Tumblr. She went to a reading. “Every single pain and heartache I wanted to describe, it was just there,” says Kaur.

In early 2014, Kaur’s Tumblr followers began asking her where they could purchase her book, which didn’t yet exist. Encouraged, Kaur self-published Milk and Honey last November, selling an unprecedented 17,000 copies. In March, Kaur made headlines with a photo series about menstruation. Instagram removed one of the images (a photo of a sleeping girl with a period stain on her pyjamas) from her account because it “violated the site’s community guidelines.” The image was eventually restored after a media firestorm, and Kaur cemented her place in the public consciousness as an artist to watch. The second edition of Milk and Honey, which has twenty new poems and a dozen new illustrations, hits bookstores worldwide today.

Amirah El-Safty: For a poet you have an enormous audience: more than 250,000 followers on Instagram, 12,500 on Twitter, and an incredibly devoted Tumblr following of 244,000. It’s very unusual. How do you negotiate this?

Rupi Kaur: I’m showered with so much love it’s unbelievable, but I don’t feel overwhelmed by it. Maybe my experiences in life have been so negative that nothing can uproot me, but when people throw compliments my way I feel like they’re really talking to someone else. I guess that’s just a defense mechanism? If I really came to terms with the fact that I’m sharing what I’m sharing I probably wouldn’t be able to process it. I certainly wouldn’t be able to be so honest and raw in my work.

AE: How do you separate what your audience wants from what you want to write about?

RK: For me writing is a form of healing, so it’s never been about the audience. Obviously I want people to like my work, but the most important thing is that I like it. I have to completely feel it.

AE: Which poems are the most popular?

RK: A lot of my work initially was about domestic violence and sexual abuse and those pieces aren’t popular. Everyone wants the four liners about heartache. The shortest ones, the ones that deal with love, those are the most popular.

AE: Are you tempted to write on those themes to grow your audience?

RK: Well, as you know I self-published the book first. In January my friends suggested—since the heartbreak pieces were so popular—that I just write those for a few months to get sales up. I had never thought about that stuff before, but I thought maybe they’re right; maybe I should be smart and do this.

So I did, and afterward I felt like I had betrayed a part of myself. I wasn’t writing what I wanted to write, I was writing what they wanted to hear. That was an awakening for me. If I’ve been given this gift should I really be using it to make people like me more or to sell an extra couple hundred copies of my book? So I made the conscious decision to write what I wanted to write about first. If people like it, that’s great. If they don’t like it, that’s fine too.

AE: They aren’t your most popular poems, but some of your most ardent fans come back to your work because of the way you capture complicated aspects of the female experience—fear of being outspoken, beauty and its influence on our sense of value, sexual and emotional abuse, menstruation, sisterhood—in just a few lines. They also share their experiences with you. Do you feel an obligation to give voice to the difficult stories you hear from your readers because you have such a large platform?

RK: I feel that what has worked so far is that I’ve been honest with myself. I have an obligation to continue doing that for them, to provide them with honest stories. I also feel an obligation to always tackle new issues. I enjoy writing about love and relationships, but it’s important to talk about the things nobody is talking about. I need to keep pushing the envelope. I’ve been given the gift to do this. How many people get that chance, especially women of colour? I’ve never really felt like it’s about me. I’m just a name and I’m going to be forgotten. But we [women of colour] are able to narrate and document our own stories now, and that’s a big deal.

AE: You write about sexuality, love, and relationships. On Tumblr, those themes aren’t unusual, but they are surprising to me because we’ve had a similar upbringing—strict household, no dating, no staying out late. Even now as an adult the thought of my parents reading personal details like that about me makes me cringe.

RK: People don’t know that my parents have read my work. The idea of my parents reading the types of things I write and then accepting it is unheard of.

They would say “I don’t get the point of all this, why don’t you just study.” We would just fight all the time. I would end up crying and nobody would talk in the house for weeks. But I understood where it came from, especially with my dad. He made all these sacrifices to come here, and he just wanted what was best for me.

AE: You never told them about your growing following?

RK: No, or that I was writing a book. When it was done I just dropped the book in front of [my father]. It was a complete 180, something inside of him just flipped. I guess that day he realized how serious I was about all of it.

AE: Another theme you’ve touched on a lot in your work is the idea of worthiness. What makes a person worthy or deserving?

RK: I used to feel worthless. Now that I feel like I have more worth, but nobody took or gave me anything, it was always all me. When I work with women’s groups I meet women of all ages and I see that sense of worthlessness all the time. Where did that come from and how do we get rid of it? Everything you think you lack, and you think that someone else can give you, is already in you—but you have to pull it out of yourself because nobody else can.

AE: It’s a tough one to grapple with. Especially when you’re in a low place, it’s hard enough to make the decision to put one foot in front of the other, never mind deciding that you are valuable and worthwhile.

RK: You have to make that decision at that moment. What other people say will help temporarily, but if you’re not shaping your mental state, then nothing anyone says will push you forward. When we lose somebody, we hurt because we feel like they’ve taken our love with them, but that isn’t the case. That love? You made it. You birthed it. We always throw the credit on other people for allowing us to be loving and giving. No, you were giving and you were caring and you will create an environment where you can foster that again.

This interview has been edited and condensed for clarity.

Amirah El-Safty is The Walrus Foundation's partnerships and marketing manager.