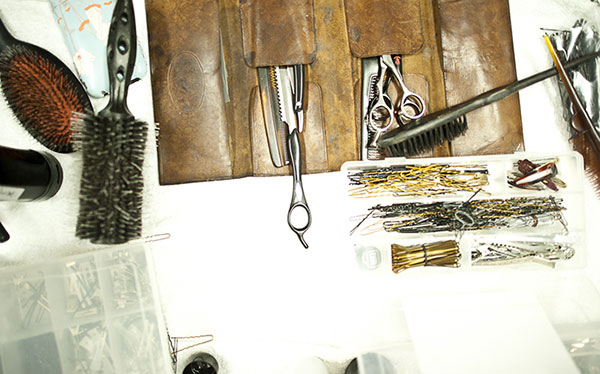 One day at the salon a teenage boy in a Smiths T-shirt and a pair of scuffed Converse All-Stars came in for a cut. His hair was long and soft, the kind of hair that teenage boys have because they fail to wash it regularly and never style it. It was light and feathery and beautiful, a sort of non-colour, a uniform grey-brown. He collapsed heavily in her chair and she found herself running her fingers through it lovingly, carefully concealing this love from him as he stared severely at her in the mirror.

“Is there something wrong with you? ” was the first thing he said. The question shook her from wherever she was.

“What do you mean? ” she said, pulling her fingers quickly from his scalp.

In trying to avert his gaze Ronnie noticed his face, naïve yet knowing. Perfect.

“Cut it all off,” he replied emphatically.

Cutting hair had become increasingly difficult while the doctors were cutting at her. She couldn’t suffer the loss of anything else. And his hair between her fingers was perfect and worthy of being saved.

“Are you sure? ” she said, lifting her scissors dramatically from her belt.

Only teenagers can get away with saying things like that to strangers.

He was heartbroken. Of course. She should have known. His misery and beauty, his suffering palpable. People who were heart-broken always had that same distinguishing glow, as if they were about to simultaneously hug and destroy everything around them.

Ronnie uncharacteristically put her hand on his shoulder. “You don’t need to do that. I’m sure it’s not that bad.”

“She kissed my best friend.”

Ronnie almost laughed at this; the idea that a kiss could bring this boy so much despair, considering all of the perverse, secret things she’d done. She stifled the impulse, nodding seriously, empathetically.

There was a pause, an acknowledgement, and without further question Ronnie cut. The feel of his hair falling around her fingers was exquisite. His miserable, accusing stare exquisite.

After many minutes of silence between them, while Ronnie was working, the boy finally spoke. “Why would someone do that to someone else? Betray them like that? ”

The question was actually one she’d had many hours to ponder, so she answered quickly. “Maybe because they need something else. Something different. Something more.”

“But I gave her everything she could ever want.”

“Nobody can give someone else everything they want,” Ronnie said coldly, focusing on cutting.

“I think you just need to find someone who is happy enough with ‘almost enough.’”

“Someone who wants mediocre? ”

“Yeah, there’s tons of those people. They’re everywhere. Go ahead and let the people who aren’t satisfied destroy each other with their wanting.”

She couldn’t believe she was saying all this to a seventeen-year- old boy. Regardless, he seemed pleased.

“No one’s ever said that to me before. Everyone always says you’ll find someone who’s right for you eventually.”

“Well, everyone is wrong. Or lying.”

The hair fell from his head and floated around them like confetti. With each cut the boy’s face became exponentially more beautiful. He became lighter.

The boy’s hair was gone. She ran her palm across his soft, round head and sighed dramatically, watching his eyes fill with tears.

“I really loved her, you know.”

There was nothing she could say, though he didn’t really expect anything further. He tipped her five dollars and skulked off the chair, his scuffed sneakers stepping into the pile of hair that surrounded them.

Stacey May Fowles will launch Infidelity: a Novel at No One Writes to the Colonel (460 College Street, Toronto) on September 26, 2013. The event begins at 7 p.m. (ET).