In the Name of Love | The Walrus
Skip to content 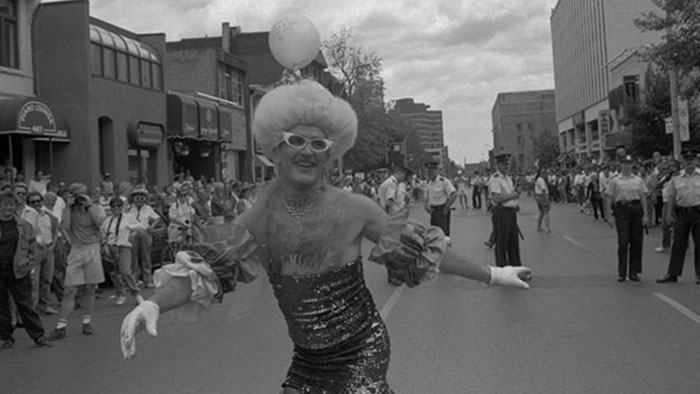 In 1986, five years after Toronto police stormed the city’s bathhouses and arrested almost 300 men, street photographer Ethan Eisenberg attended his hometown’s Pride Parade for the first time. That year the marchers, led by a roller skater in cat’s-eye glasses and a prom dress, attracted modest crowds at Church and Wellesley, the epicentre of Toronto’s gay community. But by the time the parade reached Carlton, just four streets south, its audience had dwindled. Onlookers hurled insults at the demonstrators as they turned west.

Since then, mayors who initially declined to attend the parade have recanted. (Rob Ford, notably, has not.) The event, first officially proclaimed by Toronto’s city council in 1991, has grown from a small community gathering to this year’s massive, ten-day worldwide celebration. Hundreds of thousands attend, and corporate sponsors have come on board to help cover expenses.

Most years, Eisenberg is there: documenting exchanges between couples, lovers, children, and parents; the outlandish, normal, and naked dress; and the mix of personalities at the parties and protests.

Inspired by American street photographers like Garry Winogrand and Mark Cohen, Eisenberg captures moments of intimacy. Not one to pop up for a quick shot, he needs people to know he’s there. But under Pride’s blanket, he rarely runs into problems. “One of the exhilarating things about doing this,” he says, “is that people really don’t care and they don’t feel threatened.”

Eisenberg prefers to shoot after the official festivities have ended. He gets close, and his wide-angle lens renders everything equally. “I’m not just zeroing in on a subject. Everything in the frame matters as part of the picture.”

Max Halparin is a Chawkers Fellow at the Walrus Foundation.