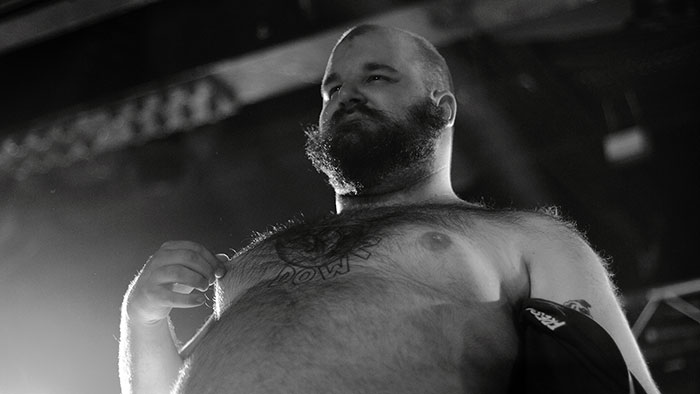 When Damian Abraham received the advance for his band’s 2011 album, David Comes to Life, he made two major purchases. First, he put a down payment on a house near Dufferin and Davenport in Toronto, which he shares with his wife and their two sons. Then he bought a record: a seven-inch test pressing by the legendary Detroit hardcore act Negative Approach, which set him back $1,800. “That was a big, big purchase,” he says with a laugh, sitting in the back room of a quasi-legal pot-smoking lounge on College Street. “It is, like, that one record that I always dreamt about owning.”

Abraham sings (well, screams) in Fucked Up, whose critical and commercial success stands as one of contemporary music’s biggest head scratchers. They emerged from Toronto’s hardcore punk scene, a culture in which bands burn up like blobs of bacon fat in a skillet. Still, despite their best efforts—their violent shows, their tendency to release ten-minute-plus singles in a genre that thrives on brutish brevity, their often-unprintable name—the self-immolation endemic to hardcore has eluded Fucked Up. Indie rock fans and the mainstream press embrace them, even if they seem at times like the high school punk friend you keep around to bolster your own cred. In a recent Harper’s Magazine essay, the poet Michael Robbins called them “the planet’s best band.”

At thirty-four, Abraham is a geezer in punk years. He is a big guy, broad and bearish, his balding head and barbed wire beard giving him the profile of an unhinged carnival strongman. Built for the mosh pit, his bulk commands its own authority but remains cushy enough to accommodate fans slamming against him. By now, though, his back is tweaked. His knees are bunged up. He has a welt on the crown of his head from smashing a pint glass against his skull during a concert. He takes Ativan to manage onstage performance anxiety, and smokes prescription pot for the sting of day-to-day life. “I swore that as soon as I got another gig, I’d walk away,” he says. “These things do not go on forever. There’s a finite existence to a band like this.”

However, Fucked Up’s new record, Glass Boys, seems hell-bent on pushing back against that finitude. The lyrics are straightforwardly emotional and the latticework of guitar riffs has loosened, revealing a band at ease straddling the worlds of hardcore and indie rock. Critics suggest that the group’s ongoing appeal lies in this transcendence of the genre’s limits: “Fucked Up have synthesized 40 years of rock into what’s ostensibly a hardcore record,” Spin raved of David Comes to Life. Some in the hardcore community, though, deride Fucked Up for making a living from music rather than sacrificing all for the purity of the scene. As Abraham self-deprecatingly puts it, the band is “procore”—professional hardcore. He has internalized this ambivalence, predicting the group’s imminent demise with every new album. “I try and go into everything like this might be the last one,” he says. “It’s one of those weird things where it’s almost too good, you know? ”

Hardcore came from the suburbs. In the ’80s, drawn by punk’s siren song, kids flocked to urban centres, only to find that all of the good bands had split up. To compensate, they doubled down. The Ramones were fast, but Black Flag was faster. The Sex Pistols played at being political, but Minor Threat meant it. The music was loud, fast, and brutally efficient. Thrashing rhythms supplanted pop flourishes such as harmonies and catchy melodies; the vocals were screamed, shouted, and growled.

Like most fans, Abraham discovered hardcore as a teenager. A middle school troublemaker, he claims he was banned from Toronto’s affluent Rosedale neighbourhood after he got busted for asking adults to buy him booze. Eventually, he moved into the city’s punk scene, where he met Mike Haliechuk, a standoffish nerd who grew up in the nearby suburb of Etobicoke. After an initial flirtation with such pop-punk acts as NOFX and Swingin’ Utters, the duo became obsessed with more obscure, challenging groups from the ’70s and ’80s—Denmark’s Lost Kids, Vancouver’s Subhumans—that they unearthed on early file sharing sites.

When Fucked Up formed in 2001, the band seemed deliberately pitched at hardcore’s front liners. Strings of seven-inch singles and EPs made their music instantly collectible. They shrouded themselves in secrecy, donning opaque nicknames (Abraham was Pink Eyes, Haliechuk was 10,000 Marbles) and writing arcane liner notes, but their weirdness felt outsized in a scene that thrives on sameness. Hidden World, their 2006 debut double LP, weaves hardcore aggression into a tapestry of guitar harmonies and unlikely vocal hooks; on “Two Snakes,” Abraham howls, “Cognitive dissonance of the soul! Let them struggle to eat it whole!”

It quickly became obvious that Fucked Up would not be pigeonholed. In 2009, when they were slated to perform at the Polaris Music Prize ceremony, they had to obtain special permission to enter Toronto’s Masonic Temple; they and their fans had trashed the venue during a pair of previous shows. They wound up winning the $20,000 prize, for their sophomore record, The Chemistry of Common Life. That album even earned them a glowing notice in the New York Times (their name was printed as a string of asterisks), which favourably likened them to Pink Floyd, a straw man of prog-rock pretentiousness.

The comparison is not totally off base. Fucked Up’s songs employ string sections, flutes, and lyrics about gnostic cosmology. On David Comes to Life, the title character vies with the record’s narrator for control of the story; it may be the only meta-narrative rock opera in all of hardcore. “For some reason, for those people who don’t have anything to do with punk or hardcore, we’re the representative punk and hardcore band,” says Haliechuk. “When it’s coming from somebody who’s not part of the culture, it makes us seem foolish.” He serves as Fucked Up’s creative engine, splitting lyrical duties with Abraham and crafting the songs’ complex arrangements. (Guitarists Ben Cook and Josh Zucker, with drummer Jonah Falco and bassist Sandy Miranda, round out the lineup.) For him, being in Fucked Up is work. When I ask how he feels about being billed with a bunch of feel-good indie collectives at an upcoming festival, he says it will just give him more time to hang out at the buffet table. He radiates the copacetic wisdom of a guy who knows you can’t win.

Abraham’s insecurities about his place in the scene are more acute. “You never know if people are going to be willing to go along for the ride with you,” he says. “And all it takes is for them to one day wake up and be like, ‘Naw, I’m over it.’ ” This attitude may reflect a concern for self-preservation. Haliechuk is a prodigious musician and composer by any standard, but the career of a hardcore screamer has a more immediate expiration date. Abraham is famously outspoken (he once tweeted, of Katy Perry, that “we need to start a war so she can go die”), and he has other gigs: he hosts MuchMusic’s revived indie show The Wedge, and he is filming a documentary about medical marijuana for Vice, and a web series about junk food for the Food Network. He needs to work hard to reinvent himself. As he shouts on “Paper the House,” Glass Boys’ lead single, “It’s a twenty-first-century irony, where everything you hoped for in life fills you with anxiety.”

Glass Boys is a different kind of concept album, one that plays explicitly on Abraham’s self-doubt; he calls it “a theme record about getting older.” Fucked Up’s members no longer use pseudonyms in the liner notes, and they don’t couch their feelings inside made-up characters. The riffs are stripped down, the guitar pyrotechnics replaced by a focus on Falco’s swaying rhythms. The album feels aimed at the veteran hardcore kids who once dismissed Fucked Up but have mellowed in the intervening years.

Throughout Glass Boys, Abraham and Haliechuk reckon with the reality of aging out of a scene that feeds on youth. They seem obsessed with antiquity; the album’s cover depicts the Antikythera Ephebe, a classical Greek statue retrieved from a shipwreck in 1900. Their hardness has softened, turning into a lyrical preoccupation with brittleness: sunlight, wilting flowers, glass. Dinosaur Jr.’s J Mascis, the Tragically Hip’s Gord Downie, and Alexisonfire’s George Pettit make guest appearances. It may sound like group therapy for aging rockers, but for a band usually steeped in complexity it is bracingly candid stuff. On the title track, written by Haliechuk, Abraham wails, “I was the source. Now I’m the decay. Just fading away.”

Abraham is suspicious of the lyric. “Is it Mike writing it through me, about me? ” he wonders. “Or is it Mike being honest to me, about him? ” I tell him I suspect the latter: that his bandmate has made his own hesitant peace with being a procore icon. The thought seems to ease Abraham’s uncertainty, as he sits, hunched and heavy lidded, in a room hazy with pot smoke. “There must be this part of him that realizes this is the best thing that ever happened to him,” Abraham says, smiling. “He must, deep down, get it.”