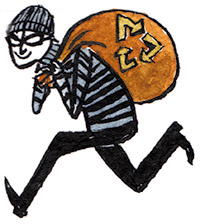 On a just-above-freezing morning in Yarmouth, Nova Scotia, the residents of Collins Street emerge from their Victorian homes, lugging bags and bins to the curb. It’s garbage day, not normally cause for anxiety, but on this particular day in April 2007 people may be feeling a little exposed. For the first time, their week’s trash will be on display in newly mandated clear garbage bags. The worry is not so much that the neighbours will get a peek into the refuse of their private lives (residents are allowed a single opaque “privacy bag” for anything embarrassing), but that if a bag contains any trace of organics or recyclables, haulers will mark it with an orange sticker and leave it at the curb, branding its owner as the neighbourhood eco-boob.

This wouldn’t have sat well with Nova Scotians, who pride themselves on their waste management; they were the first in Canada to initiate curbside composting back in the ’90s, and for several years the province has maintained the lowest national waste disposal average, at around 420 kilograms of garbage per person per year. Provincial officials, however, felt there was still room for improvement, and set a tough new target of 300 kilograms by 2015. For a waste-conscious community, the new goal would be like losing those last five pounds: stock measures just wouldn’t cut it. Indeed, educational booths, pamphlets, and house calls made little progress; but in the clear bag bylaw’s first year, residents across the counties involved threw out roughly one-quarter less trash, while recycling and particularly composting rates jumped, proving that public scrutiny motivates like nothing else.

Behavioural psychologists have long known that people are suckers for peer pressure, a key tenet of social marketing that has been used to sell sneakers, stigmatize drunk driving, and save baby seals. However, only in the past decade, with all the hype about climate change, has it been employed in campaigns to save the earth. “Getting people to care about these issues enough to make changes should be relatively easy,” says Dan Dolderman, a University of Toronto psychology professor specializing in environmental behaviour. “But there’s a huge gap between people’s motivations and their actual lifestyles.” In his pioneering 1999 book, Fostering Sustainable Behavior: An Introduction to Community-Based Social Marketing, New Brunswick environmental psychologist Doug McKenzie-Mohr calls for a more tactical approach: raise the visibility of eco-friendly behaviours sufficiently that they become social norms. The idea is that the more a behaviour is observed, the more likely it’s deemed correct.

And the more likely people will follow suit. Take the blue box. “You see them as you drive to work in the morning, and then again when you come home—that’s a very strong social norm,” says Ken Donnelly of Lura Consulting, one of two firms in Canada that implement McKenzie-Mohr’s brand of “community-based social marketing.” Case in point: within three months of launching the country’s first community-wide recycling pilot project, in Kitchener in 1983, participation had reached 80 percent. By 1996, three million homes across Ontario had blue boxes, and today recycling is a domestic ritual on par with mowing the lawn. The use of clear garbage bags takes the principle of visibility one step further, with comparably dramatic results, and to date they’ve been mandated in thirty-five of Nova Scotia’s fifty-five municipalities.

Elsewhere, norm appeals have been incorporated in campaigns to check all manner of eco-offences, including car idling, littering, the use of lawn pesticides, and, perhaps most significant, excessive energy consumption. This year, a Virginia software company called Opower received international media attention and a visit by President Obama for its groundbreaking utility billing system, which compares energy use among neighbours and rewards the lowest consumers with a smiley face. Simply informing residents how they stacked up against their peers was enough to cut average household consumption in some test groups by 2 to 3 percent annually.

Though the strategy may seem brilliant in its simplicity, entrenching norms is labour intensive and may not always work. McKenzie-Mohr is the first to acknowledge that plenty of education up front, followed by ongoing reminders and incentives, is required to engage early adopters and spark the social norms engine. Critics, meanwhile, argue that, for all the work involved, the desired behaviours simply aren’t substantial enough. “The challenges we’re up against are enormous,” says Tom Crompton, who studies the use of social norms in eco-campaigns for the wwf-uk. “And they are not going to be fixed by getting a few people to buy hybrid cars or change their light bulbs.” Worse, norm appeals don’t stimulate intrinsic values, which have been found to prompt more meaningful, more painful, sacrifices. “People feel they’ve done their part,” he says, “so they tend to rest on their laurels.”

But Ken Donnelly defends the notion of acting locally, a staple of the contemporary environmental movement. “There are billions of people on the planet, and if they’re all doing little things it’s going to have an impact,” he says. In provinces like Nova Scotia, where recycling and composting rates are high, there have been tangible results in terms of land use and greenhouse gas emissions. “And it’s not just for one year,” he adds. “It’s going to go on and on forever, because now it’s the social norm.” Besides, in the absence of better ideas, mucking around in the sandbox of human behaviour may be all we have.

Since 1987, California’s CalRecycle incentive program has offered a five- to ten-cent refund on cans and bottles, but the initiative may have been too successful. Petty crooks have filled empty containers with sand to increase their weight for a bigger cash return, while more ambitious types have started up interstate schemes to cash in. In April 2010, authorities busted three fraud rings; the culprits had attempted to bilk recycling centres of a combined $3.5 million (US). Thirty-one people were arrested under suspicion of smuggling truckloads of recyclable contraband to California from Nevada and Arizona, states without their own redemption programs. The accused have been charged with conspiracy, grand theft, and unlawful recycling.