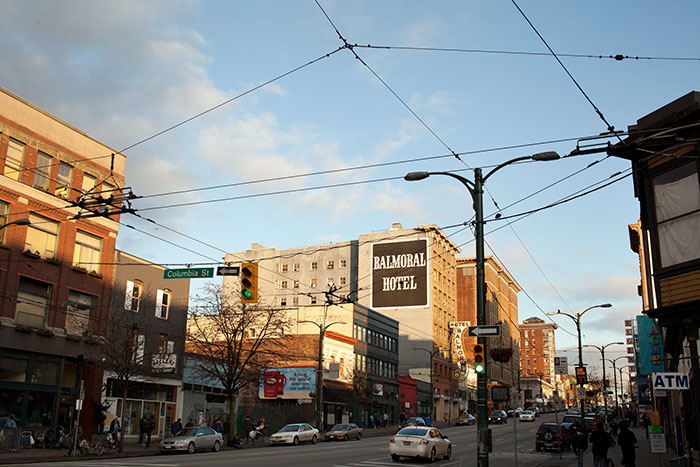 Colleen Carroll worked for years at a sawmill in northern British Columbia, until, in 1993, a lung condition forced her to retire. The following year, a stroke decimated her short-term memory, so she moved to Vancouver to be closer to her sons, whom she had raised on her own. She rented a $350 bachelor apartment at the corner of Main and Hastings, the heart of the Downtown Eastside. “I was in pretty bad shape,” she says. When she heard that Humanities 101 (Hum for short) was taking students, she signed up. She had always wanted to go to university but never had the money.

Two nights a week, students from the dtes, aged twenty to eighty, come to the University of British Columbia campus to take philosophy, art, history, politics, law, literature, gender studies, writing, and more. Many live in insecure housing; some are homeless. Assignments are not graded, and the program provides course materials, bus tickets, meal vouchers, and child care for free. Although just getting to class presented a Sisyphean task for Carroll—she would draw detailed maps, with blue pen for the buildings and red pen to delineate her route—she found that her long-term memory remained intact, so she could retain new information by associating it with concepts she already understood. When she graduated, she applied her lessons to the community where she lives, which is precisely the point.

Hum—which has inspired ten sister programs, from Victoria to Halifax—arose from the Clemente Course, the brainchild of American journalist Earl Shorris (and named after the Manhattan community centre where it was first taught). In a 1997 Harper’s article titled “As a Weapon in the Hands of the Restless Poor,” Shorris told how Viniece Walker, an inmate in the maximum-security women’s prison where he had been conducting research for a book, shaped his educational philosophy. When Walker saw the proposed syllabus, which contained a healthy dose of Plato, she insisted something was missing: “How can you teach philosophy to poor people without the Allegory of the Cave? The ghetto is the cave. Education is the light. Poor people can understand that.” More than skills-based programs, the humanities could give the poor “a moral alternative to the street.”

The real-life consequences of loaded symbols 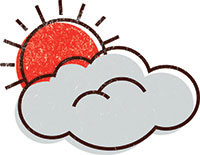 In 2004, urban geographers David Wilson and Thomas Mueller published findings that linked gentrification in St. Louis, Missouri, to language used by reporters at the St. Louis Post-Dispatch. Neighbourhoods likened to “living organisms,” with bodies that could fail or thrive, saw high levels of development; as did regions described using a “technical salvation” metaphor that suggested they needed rescue. Not all zones were depicted as such: the study notes that marginal low-income neighbourhoods were often characterized with the language of disease and contagion, an implicit warning to developers.

In 1998, UBC student Allison Dunnet and arts development staff member Am Johal came across Shorris’s writing and decided to start their own Clemente-based program at the university. They would cater to the DTES and surrounding neighbourhoods—an area provided with an abundance of skills development programs but few academic ones—and faculty members would serve as volunteer lecturers. Unlike with Clemente, though, the goal at Hum is not to pull people out of the cave of poverty and into the hallowed halls of academic life. “Our students don’t need to be here,” says Margot Leigh Butler, Hum’s academic director. “They don’t need to take these courses.” Many students were community leaders for decades before signing up. The DTES—notoriously known as “Canada’s poorest postal code”—is considered an archetype of urban poverty, but those who inhabit the archetype rarely get to speak for themselves. That’s where Hum comes in.

Whereas the Clemente Course embraces what is referred to, tongue in cheek, as the Great Books Redemption, Hum doesn’t valorize the classics for their putative civilizing effects. Instead, it focuses on texts that are relevant to students’ lives, so classroom learning informs political activism. In January 2010, attendees read Bertolt Brecht’s essay “Writing the Truth: Five Difficulties,” which framed an analysis of the Vancouver Olympics and the ensuing media representation of the DTES. A year later, Elvin Wyly, an associate professor of urban geography, gave a lecture on gentrification, which helped prepare students who were scheduled to speak out against DTES rezoning at City Hall.

Hum participants differ from typical undergrads, says Wyly, because they understand that abstract theories have real-world consequences. Hum doesn’t profess to teach its students new ideas; they are already familiar with the concept of gentrification, even if they have never put a name to it. Instead, they get an opportunity to discuss these concepts in the language of the elite. “It brings out knowledge and provides new tools so they can challenge some of the assumptions being made about them.” Then there’s the joy of studying for its own sake.

Carroll now runs a Saturday-night documentary series (Hum provides coffee and pastries); audiences of up to seventy-five attend screenings and take part in group discussions afterward. The choice of evening is deliberate: “Saturday night is party night,” she says. “People need something to do, especially when they’re recovering drug addicts or alcoholics. This way, everyone has someplace to be and something to learn.” She also obtained a small-projects grant to supply locals with musical instruments and a space to play; the Homeless Band can often be found rehearsing at Oppenheimer Park. “Music,” she says, “takes the edge off the misery of being homeless in Vancouver.”

Many people want to learn, she explains to me one Saturday night, but don’t know where to start. They lack the critical language that serves as an entry point into various debates, which, in the DTES’s case, often concern them. “If you want to understand an elephant,” she says, “you can’t just look at it face on. You have to walk all around the critter to see what’s going on there.” I watch as she piles coffee and pastries onto a cart and wheels it toward the auditorium, where a screening is about to start. “Hurry up!” she urges, as I struggle to keep pace. “People are waiting.”