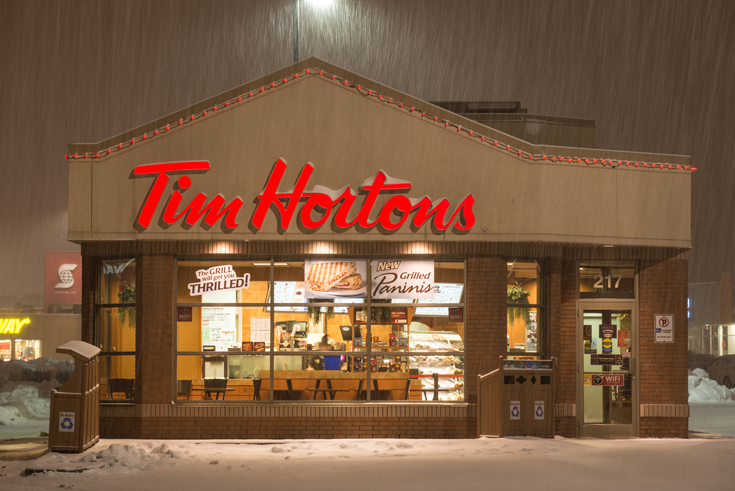 If you asked Canadians to name the company they associate most closely with their country, Tim Hortons would surely top the list. It’s hard to think of an aspect of Canadian life the brand hasn’t infiltrated, from our language (the term “double-double” is now in the Canadian Oxford Dictionary) to our army (between 2006 and 2011, Canadian troops could get their Timbit fix at a location in Afghanistan’s Kandahar military airfield).

Some of this has to do with the brand’s sheer ubiquity. Its 1995 merger with Wendy’s gave Tim Hortons the financial clout to push deeper into new markets, and as of 2018, the company had 4,846 locations across Canada. You can chalk up the rest to a solid PR strategy that revolves around a long and productive relationship with hockey. After all, what could be more Canadian than a restaurant chain created by a Toronto Maple Leaf? For years, Tim Hortons has funded community hockey across the country and enlisted down-to-earth NHL icons like Sidney Crosby and Wayne Gretzky as spokespeople. Recent ads draw a direct link between the Great One and an encounter with the founder at a newly opened location in Brantford, Ontario, back in 1968. The young Gretzky forgot to bring something for his idol to sign, but his mother grabbed a napkin and handed it to Horton, who wrote, “Wayne, Best Wishes, Tim Horton.” (Gretzky’s dad still has that napkin.)

This kind of marketing savvy helps explain how an otherwise unremarkable coffee-and-doughnut chain managed to mirror our national sense of self. “It’s welcoming, it’s down to earth, it has no pretensions, it’s polite, it’s courteous,” McGill University marketing professor Robert Mackalski told the Guardian in 2018, when the British newspaper decided to cover the company’s place in the Canadian psyche. “It’s Canada itself.” Tim Hortons is also helped by the fact that many other successful Canadian companies are compromised in some way. Bombardier and SNC-Lavalin are pariahs in most of the country; oil and gas have achieved almost mythic status in Alberta and Saskatchewan but are increasingly unpopular in urban centres to their west and east. Tim Hortons, on the other hand, bridges the divides between east and west, urban and rural. It’s the club sandwich of corporate identities—not everyone’s favourite, but nobody’s least favourite either.

There is at least one divide Tim Hortons has been useful in sharpening, though. The company’s success in establishing its blue-collar bona fides has made it both a magnet and a metaphor for a part of the population that often feels—and gets—ignored. “What I see when I’m there,” Bruce Philp, an author and retired branding consultant, told Maclean’s in 2018, “are a lot of trucks in the parking lot, people in reflective vests and hardhats, and counter staff who know customers by name or call them ‘hon.’” For this demographic, argues Philp, the Tim Hortons brand isn’t an abstraction but a “third space” between home and work “with a pointed lack of pretence that makes them feel comfortable and understood.”

This conflation of class and coffee isn’t unique to Canada. In both the United States and Great Britain, one’s preferred method of obtaining caffeine can say a lot about their politics. Back in 2005, New York magazine reported on the “coffee class war” then brewing between Dunkin’ Donuts, with its charm-free, no-frills fare, and Starbucks, which favours speciality items. And, in the UK, the demonization of certain kinds of coffee as symbolic of predatory capitalism reached new heights when Labour leader Jeremy Corbyn, famous for his radically socialist platform, shared the term “posh coffee” in a 2017 reelection fundraiser.

But few precedents exist, I think, for the scale on which Tim Hortons seems to have become embroiled in class resentment. This partly helps explain why Prime Minister Justin Trudeau’s choice of doughnuts this past January ended up provoking one of social media’s more ludicrous outbursts in recent memory. Trudeau, who doesn’t actually drink coffee at all, went out to buy doughnuts for his caucus meetings during a retreat in Winnipeg and made the fateful decision to support a local business rather than the nearest Tim Hortons. That small business charged $35 for a dozen doughnuts—in part so that it could afford a higher hourly pay for staff, unlike a certain Canadian institution which has attracted protests over its refusal to pay a living wage. This act of doughnut disloyalty was apparently an intolerable insult to some people on Twitter. Even Trevor Noah, the host of The Daily Show, weighed in on the noncontroversy: “Really, Canada? That’s your scandal? Your prime minister brought the wrong doughnuts?”

It was never really about the doughnuts, though. Instead, it was about how polarization managed to colour a brand that continues to have unparalleled cultural purchase with Canadians despite having been owned by a Brazilian investment firm since 2014. It’s no surprise, for example, that, during the same week as Trudeau’s doughnut scandal, Peter McKay, who is running to be leader of the Conservative Party of Canada, was filmed being interviewed in a Tim Hortons.

It’s not just conservative politicians who have inclined toward the friendly confines of a Timmys, either. Back in 2003, Sheila Copps launched her doomed bid for Liberal Party of Canada leadership at a Tim Hortons location—one of Canada’s first—in Hamilton, Ontario. And no wonder: so-called Tim Hortons voters remain one of the biggest prizes in Canadian politics given both their sheer numbers and the fact that they skew older and therefore tend to vote more regularly. “Where politicians once made church basements the fixture of their campaign road trips,” the Toronto Star’s Susan Delacourt wrote in her 2013 book, Shopping for Votes: How Politicians Choose Us and We Choose Them, “the refreshment-stop of choice is now the ubiquitous Tim Hortons.”

Some of this dates back to former prime minister Stephen Harper, who perfected the political weaponization of the double-double. Harper frequently used Tim Hortons locations as backdrops for announcements or photo ops and, in 2009, even skipped a meeting of world leaders at the United Nations General Assembly to give a speech at the Tim Hortons Innovation Centre, in Oakville, Ontario. “In the space of a couple of minutes,” Delacourt wrote, “Harper managed to link this doughnut store to many great things about Canada: hockey, family and even Pierre Berton, chronicler of Canada’s nation-building efforts.”

But the brand is not as bulletproof as it used to be. A 2018 brand-reputation ranking conducted by Leger saw Tim Hortons come in at fiftieth place—just a year earlier, it had ranked fourth. Even worse, the University of Victoria’s Peter B. Gustavson School of Business’s annual brand trust ranking that same year had Tim Hortons coming in at 203rd—a massive drop from the number one spot it had occupied as recently as 2015.

Some of the heaviest fire the company has taken recently was due to the very public decision by some franchisees to cut employee benefits in response to the Ontario government’s mandated minimum-wage hike in 2018. One of those franchises was owned by none other than Ron Joyce Jr., the son of Tim Hortons cofounder Ron Joyce, and Jeri Lynn Horton-Joyce, the daughter of Tim Horton himself. “Ron Joyce Jr. Enterprises Ltd. gave staff members a letter to sign indicating that they agreed to a series of compensation changes, including eliminating paid breaks, and asking them to pay the majority of costs associated with benefits,” the CBC noted. As it turned out, the couple was at their winter home in Florida at the time.

Tim Hortons’s fall from commercial grace was underscored when, in the midst of Prince Harry and Meghan Markle’s disengagement from the British royal family, the company’s Twitter account tried to score a digital win: “No pressure, Meghan and Harry, but if you do choose to move to Canada, free coffee for life. Think about it.” In response, many Canadians drew attention to the fact that the company could apparently afford to give wealthy royals free coffee but routinely balked at increasing the wages of its own employees.

It’s hard to imagine such an innocuous tweet provoking such a hostile response even a few years ago, and it speaks to the dangers of brands being politicized. That said, we haven’t seen the end of politicians posing with their double-doubles, and the local Tim Hortons still serves as a de facto community centre in towns and cities across the country. (This month, Global News reported that, from 2015 to 2019, Canada’s forty-second Parliament spent $116,415 at various Tim Hortons locations, making it the most popular restaurant for MPs.)

But that may be as much a function of cultural inertia as it is a sign of things to come. The company announced that its new strategy for 2020 involves, according to the Financial Post, “a return to its roots as a simple coffee-and-doughnuts chain.” But, after more than a decade of serving as this country’s political prop of choice, and at a time when polarization seems to keep getting worse, it’s not at all clear that Tim Hortons can turn back the clock on its relationship with Canadians.