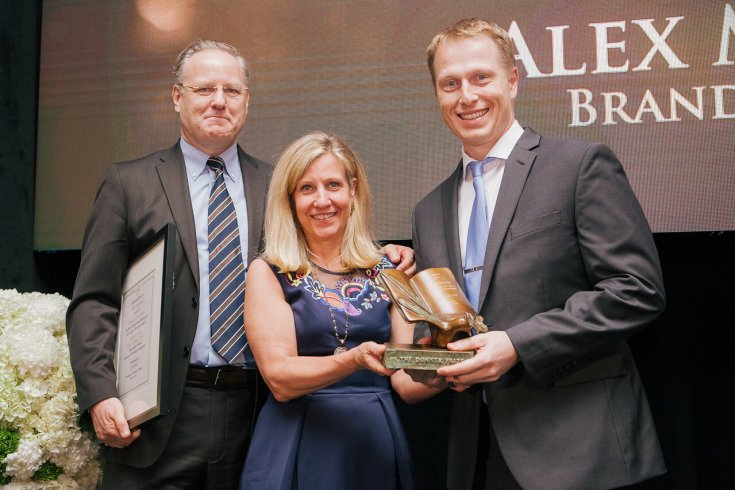 Alex Marland, associate professor of political science and associate dean of humanities and social sciences at Memorial University in Newfoundland, is this year’s winner of the Donner Prize, which recognizes excellence in writing on Canadian public policy. His book, Brand Command: Canadian Politics and Democracy in the Age of Message Control, discusses how the principles of marketing and branding influence politics.

Tina Knezevic: What is political branding and why is it relevant now?

Alex Marland: I used political branding as an expression to refer to messages coming together—to be simplified—so that the same words and visuals are repeated over and over. I think it’s useful because when you have so many different media voices and forms of communication occurring at the same time, it allows political parties to drive home a message and stay focused on particular points. It’s all about aligning everything, making sure the visuals match the words, and hopefully creating some sort of emotional connection with voters so that they feel they’ve made an attachment that prevents them from considering other alternatives.

TK: What inspired this book and made you write about it in this particular time in history?

AM: At the time, it was really observing how much marketing the Stephen Harper administration was using and how much they had clamped down on the amount of information they were willing to release and the accessibility provided to journalists and others. It’s also topical because the Harper administration was there during a period when Facebook was really emerging and Twitter was just invented. It’s allowed me to take a look at a period that was transformative in Canadian politics because of the changing communication technologies. Though I happened to look mostly at the Harper administration, I think my theories are relevant well beyond Harper and into Trudeau and whoever comes after him.

TK: Is the public aware of political branding or the fact that this is going on behind the scenes?

AM: I would say most people wouldn’t be, and actually, even most academics wouldn’t be. I think the people who study this area realize that there’s a lot of effort occurring in the background to try to manipulate what news coverage may occur. People have no idea just how much prep work goes in, and it’s not just in politics—it happens in all manners for things involving public relations, media relations, or advertising.

AM: No government can ever control what the masses do, think, or say in a democratic society. The interesting thing for me is that with the use of technology, it’s a lot easier for political parties to ensure that all their representatives are in line. Because of technology, you can monitor what people are saying publicly and find out in real time and do something about it. Political parties and the prime minister’s office are constantly sending out information that tells their “brand ambassadors” or representatives, “This is what our message of the day is. This is what our party leader is doing so we expect you to stay on message because if you don’t, it’s going to derail everything we’re trying to do.” This is really what I think the concern that we should have is: every time there’s an election, there’s an increased emphasis that candidates don’t stray from the party line. What does that tell you if you are somebody that’s running for office and you see how embarrassed somebody is if they are ripped to pieces publicly and told to resign if they happened to say something off script? What kind of parliamentarians are we electing? We’re electing people who are unwilling to publicly challenge their party leader.

TK: This inevitably makes me think of Trump, but I’ve heard that you think Canadians need to stop focusing so much attention on the US and look at what’s going on at home. Why do you think politicians here don’t have our attention in the same way?

AM: I feel like it’s important, first and foremost, that citizens pay attention to the elected officials that govern them before they start paying attention to leaders in other societies where they have no say. My concern about paying attention to the American president is that it sucks away all the oxygen from the discussion about what may be happening at the federal, or provincial, or municipal level here. And I think the reality is that the media understandably will want to appeal to people. Most public policy is boring and most of what happens in politics is boring and when everybody is so scripted, there’s no drama and there’s no storytelling. Then you have a populace that does all sorts of things to break the norm, so of course that’s newsworthy and people are interested. My own view is that the problem is that the more Canadians are interested in that human-interest reality TV occurring south of the border, the more that tells journalists and news editors in this country that maybe we should put more of this on because that’s what people are looking for. It becomes a difficult cycle to break.

AM: The good thing about branding for media and citizens is that it simplifies things that are difficult and helps people process information faster. It’s also good for journalism because there’s a lot of effort put into photo ops and other packaged events and these are sent out for their use. Of course, that all comes with a significant downside, which is that it’s organized in a way that the government or political party wants—and obviously, it’s a biased piece of information. This means that judgments are sometimes based on small slivers of very complicated things. The challenge for journalists is to try and figure out, “How do we resist market forces which are making it difficult to support good investigative journalism and fight back against governments that don’t want to release information?” There are governments that release information through open mechanisms but it’s still important to have journalists who can dig.

TK: Given the bias, how do we, as citizens, know we’re not being manipulated?

AM: The way I’ve argued this in Brand Command is that a politician has what’s called a “master brand.” A prime minister will have a core set of brand values that matter to them more than anything and that’s connected to how they’re perceived publicly. If you can unlock what that perception is—what they want to be seen as—you can start to figure out their policy direction and what they’re likely to do. Stephen Harper wanted us to think about the economy. That’s the simple message that I think the Conservatives were trying to convey. But what ends up happening is that you have all sorts of policies that have nothing to do with the economy suddenly being promoted as though they are helping the economy. I would argue to some extent that the overarching brand for Justin Trudeau would simply come down to diversity and things related to the Charter of Rights and Freedoms. It becomes this lens of “Everything we’re doing has to convey that perception that it’s really important to focus on that.” There’s a lot of things going on in the world other than the economy or diversity.

TK: How does the media know that they’re not being manipulated?

AM: My opinion is that it’s important for journalists to have the time and space to be able to think about things critically, and that involves being able to file access-to-information requests, and being able to work the phones and meet with people to get story ideas and somehow resist the temptation to chase whatever story is trending online when everybody else is also chasing that story. So you really need the ability to say, “Here’s an avenue we think is important. We’re going to look at it even though nobody else is looking at it,” and that takes a bit of determination to do.

TK: Is there anything else we need to know?

AM: A lot of this is based on the fundamental premise that there are an awful lot of citizens that don’t have the time or interest to pay attention to politics. And it’s these people who politicians and their communications handlers are directing their attention to. But there’s also an opportunity to empower and legitimize the senate—which is something that it appears Trudeau is trying to do. It may not be happening as much as they say it is, but it could be quite positive. The people that are always acting as “brand ambassadors” are mostly parliamentarians in the House of Commons. There’s an opportunity for senators to hold the House of Commons to account, and I think that’s an example of a potentially positive trend.

An excerpt from Brand Command can be found on The Walrus’s website.

This interview has been condensed and edited.

Tina Knezevic is an editor at TVO and a former Chawkers Fellow at The Walrus. Her work has appeared in the National Post, Dallas Morning News, and TVO.

Tina Knezevic is an editor at TVO and a former Chawkers Fellow at The Walrus. Her work has appeared in the National Post, Dallas Morning News, and TVO.
X