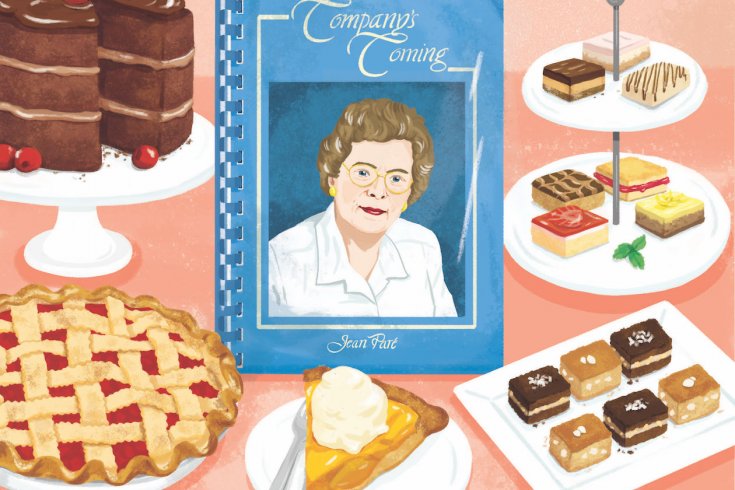 Six years later, Gail Lovig still vividly remembers the sunny fall afternoon her mom taught her how to make pie crust. Lovig laid out the required tools and ingredients in her kitchen in Fanny Bay, British Columbia, while her mother—who happens to be Jean Paré, of Company’s Coming cookbook fame—was perched on a stool nearby, a glass of white wine in hand. When she was ready, Lovig looked over at her mother and said, “Okay, tell me what to do.”

Paré had always made pies for family get-togethers, so Lovig hadn’t felt the need to make her own until then. But as Paré got older, Lovig wanted to carry on the tradition. “It’s food, it’s connection with your family,” reflects Lovig, now sixty. “What recipes do you want them to remember and connect to you?”

Just as Paré showed her daughter all the tricks for achieving perfect pastry that day, she helped a generation of Canadians learn how to cook and bake. She launched Company’s Coming Publishing Limited with her bestselling cookbook 150 Delicious Squares in 1981 from her home in Vermilion, Alberta. By the time Paré hung up her professional apron thirty years later, she had won numerous awards, authored and self-published more than 200 books (which have collectively sold more than 30 million copies), and firmly established herself as one of the most successful cookbook authors in the world.

One of Paré’s great insights was seeing the potential in “a book about bars and squares,” says fellow Canadian-cookbook author Elizabeth Baird. “She had an eye for what people really wanted, and she did a good job in giving it to them.” Paré’s books looked and felt like heartwarming instruction manuals, with knee-slapping puns and colourful photos of comfort food scattered throughout. They were distributed in places people shopped already: grocery stores, pharmacies, lumberyards, and hair salons.

During her reign, Paré became an archivist of Canadian cooking traditions, preserving and interpreting recipes she grew up with and collected throughout her life. (Paré, who turns ninety in December, doesn’t do interviews anymore.) But even as she became a Canadian tradition herself, she never abandoned one of her most treasured sources of inspiration: the community cookbook. “She wasn’t trying to be a fancy-pants,” says Baird. “She was just being honest in the way she was.”

In the first half of the twentieth century, our country’s home cooks simply didn’t own many cookbooks. (Paré herself only had two when she first got married.) But that doesn’t mean they lacked recipes. They relied on ones clipped from magazines or newspapers, handwritten by friends and family, and pulled from the community cookbooks that have been carefully curated by groups of women across North America since the late 1800s.

“These local cookbooks, they had this other purpose. They were often about fundraising for your church or the Red Cross or the war effort, and what they ended up being was this amazing collection of local recipes,” says Toronto-based cookbook historian Elizabeth Driver, who authored the study Culinary Landmarks: A Bibliography of Canadian Cookbooks, 1825–1949. “You would only give a recipe that you thought was your best. You often put your name on it, that’s how proud you were.”

Judy Schultz, the Edmonton Journal’s food writer for twenty-six years, also wrote the biography Jean Paré: An Appetite for Life. In it, Schultz describes Paré’s voracious appetite for reading and collecting any and all cookbooks and her “particular fondness for community cookbooks, church cookbooks, Junior League cookbooks, anything written by those homemaking women she considered to be the real cooks in North America, and indeed everywhere else she travelled in the world.”

The 6,700 cookbooks Paré eventually donated to the University of Guelph in 2009 reflect this admiration. Some representative titles: Kitchen Capers: A collection of favourite recipes compiled by The Arts and Crafts Club of St. Andrew’s United Church, Fort Qu’Appelle, Saskatchewan and Personal Recipes published by the Ladies Auxiliary to the Associated Canadian Travellers of Lethbridge, Alberta.

The Company’s Coming titles were a vital addition to the Canadian culinary canon. Paré’s cookbooks straddled “that bridge between the community cookbook and the chi-chi, aspirational cookbooks,” observes Kathryn Harvey, head of archival and special collections at the University of Guelph’s library. “When you think of published cookbooks, you tend to think they are more aspirational, that they don’t really tell you what a community or society ate. Company’s Coming was an empire, and yet it had the feel of community cookbooks. So they’re kind of in-between.”

Paré’s books also evoke her own practicality, right down to the original series’s telltale spiral bindings, which allow the books to stay open as cooks measure, stir, and pour. Having raised four kids largely on her own, Lovig says, Paré understood that sometimes it was necessary to serve up good food, fast. Why worry about making a sauce from scratch if a can of creamed soup could help in a pinch? And who needed to peel and mince fresh garlic for a weekday dinner when powdered was ready to go in the cupboard?

Each of her themed titles, from Casseroles to Pies to Vegetables, offers simple recipes made with ingredients that could be found even in rural areas. (Limes, for one, weren’t available in Vermilion when Paré started Company’s Coming.) As the brand grew and Paré moved her test kitchen and office to Edmonton, she still insisted on tasting every dish herself.

“There’s a reason why [Company’s Coming] did so well; there’s a reason why people turned to those recipes so often and throughout the years,” says recipe developer Annabelle Waugh, who has contributed to nineteen Canadian Living cookbooks. “When you put out 200 cookbooks, it’s because you’ve built up an incredible trust relationship with your reader, and I think that speaks more to her style than anything.”

As opposed to glossy, coffee-table cookbooks with complicated recipes and hard-to-find ingredients, or even today’s more polished guides to home cookery (think Rachael Ray or Delia Smith), Paré’s guides look like the community recipe collections that helped inspire her. She wanted her readers, no matter their skill level, to succeed. A photo of her calm, reassuring face appeared on the back of her books, as though she was saying to the most novice of cooks, “You’ve got this. I’m right here with you.” And they loved her for it, sending her thousands of letters to thank her for making their lives easier. Sometimes they even enclosed their own recipes. She kept every single piece of correspondence and wrote each person back, by hand.

When Paré received the Order of Canada in 2004, she was perplexed. “Why would they give me this?” she asked her daughter. But to Lovig the answer was clear: her mother’s down-to-earth style made cooking accessible for readers who might otherwise be intimidated.

Paré has applied that same humility and practicality to planning for her funeral, telling her children to keep the service simple, no longer than twenty minutes. When the family discussed where to hold it, in Vermilion or Edmonton, Lovig stressed the importance of choosing a location that’s big enough to accommodate everyone—just the Company’s Coming staff and their spouses will amount to a couple hundred people. “She looked at me in disbelief,” Lovig says laughing. “Like she can’t imagine anyone wanting to even come.”

Isabel Foo is a Toronto-based graphic designer and illustrator.