Horses, Depression, and Me: How Riding Changed My Life | The Walrus
Skip to content 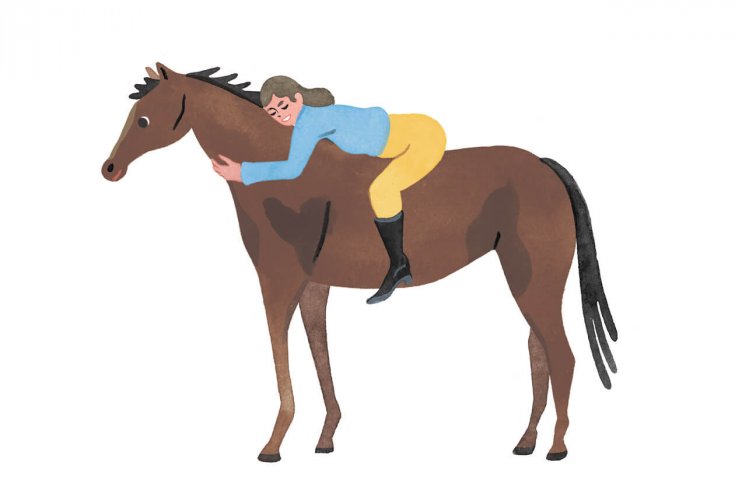 There’s a difference between equestrians—athletes who ride—and horse girls, who probably love riding, too, but are also incurably obsessed with equines. My sister and I were definitely horse girls. Years before our first real riding lessons, we read about horses, and any chance we got, we were on horseback. We were also lucky: a friend’s mom was a riding instructor, and we traded chores for lessons at her barn while growing up in Edmonton. Those few years, from around age twelve to fifteen, were some of the happiest of my life.

Eventually, we had to quit riding, because it was expensive and my parents couldn’t drive us out to the country all the time. School became a priority. I always wanted to ride again, but I have been a freelance writer for most of my adult life, so there was no way I could afford it.

I freelanced for so many years partly because the idea of full-time work terrified me: I’ve dealt with depression since I was a teenager, and self-employment allowed me to manage my own schedule so I could accommodate my physical and emotional exhaustion. I was only formally diagnosed and given a treatment plan in my midthirties, and I slowly got better. A steady government job would follow several years later. And now, in my forties, I am literally back on the horse.

It’s a different thing to relearn a skill rather than start as a beginner. My body wasn’t strong enough to execute the movements needed to steer a horse. It was frustrating having to explain to my instructor: Yes, I know this, but I am old and out of shape.

I also had to work up a lot of nerve to start again. The horse world has its own culture, and I worried about fitting in. But I also wondered what my pastime must look like to my friends. Once, when my sister and I were younger, our dad said to us about riding, “We are not the kind of people who do these things,” and I think about that a lot. Horseback riding is still an expensive pursuit and a symbol of privilege. Knowing this makes me feel a little embarrassed: the world is burning, and I choose to do this?

But, for me, going back to riding wasn’t simply about taking up a hobby. In the fall of 2017, when the therapist I wanted to see wasn’t able to fit me in, horseback riding became a good second choice. I was already aware of the tradition of equine therapy: with a horse, you get instant feedback on how you are in the moment. Are you tense? Angry? The horse feels it and reacts in kind. Movement in response to tension is tense. Movement in response to anger often ends with you lying in the dirt. You always need to be aware of how you are holding yourself mentally, emotionally, and physically. Where are your arms and legs? What is the angle of your body in the saddle? Are you providing confident leadership or transmitting anxiety and fear?

Riding is a partnership. Horses can’t see directly in front of them, so jumping is a matter of the horse trusting the rider to provide the appropriate rhythm, speed, and direction that will get them to the safest spot to take off from—and we riders have to trust that they’ll get us over the fence. They try to understand us and to co-operate—and that’s more work than most humans are willing to do for each other.

Riders also have to learn how to read their animals. Horses have facial expressions. They exhibit preferences. There’s nothing more heartwarming than the sound of a horse nickering when you approach the gate. And there’s something really moving about a massive creature that could kill you (with hooves, teeth, and the sheer weight of its body) but won’t. It’s an honour to be considered part of the herd rather than a threat.

Last fall, I rode in a small schooling show. The competitors included other riders at the barn; the judges were volunteers. Still, I could barely sleep the night before, and I considered dropping out. Despite a few mistakes here and there, my school horse, Dash, and I won several ribbons. The recognition is nice. But, mostly, it’s good to be with the animals I love.

Building a relationship with a creature that has a different way of looking at the world is an exercise in patience and compassion. I’m more ready to face the world after spending time around a horse. It’s a relief to groom, tack up, and ride. I feel like I’ve found my way back to an old friend. It means I’m finally fine after so many years of struggling.

Mari Sasano has written for xoJane and Alberta Views. She is based in Edmonton.
Tallulah Fontaine