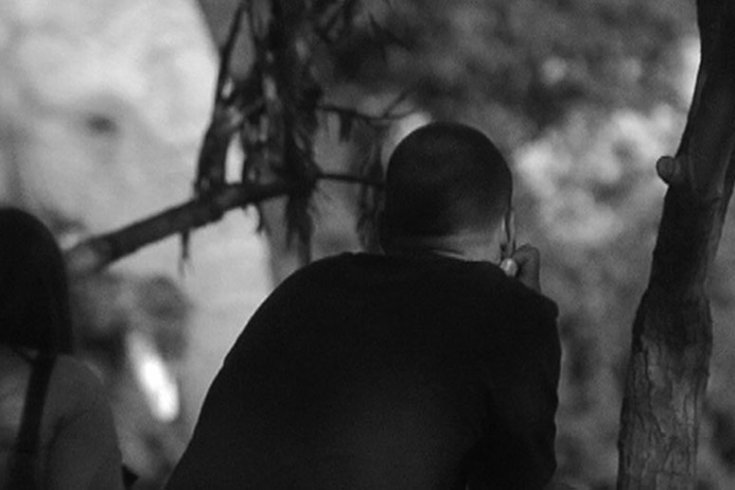 Film still from I Went to the Zoo the Other Day

The title of TIFF Bell Lightbox’s new retrospective of Luo Li is “You Can’t Go Home Again”—an ironic allusion to Thomas Wolfe when placed in the context of the Chinese-born, Hamilton-based director’s career. Since 2010, Li has travelled home to Wuhan on three occasions to shoot features on China’s history, geography, and heritage that mix elements of fiction, documentary, and experimental cinema.

Li’s interest in both traditional and contemporary aspects of Chinese society is apparent, and yet it would be wrong to brand him specifically as a “national” or even a “trans-national” filmmaker. Rather than a young artist caught between cultures, Li appears at this early juncture to somebody who’s entirely comfortable within his chosen medium. Cinema seems to be his natural habitat.

Li is at the forefront of what might be called the “new new wave” of Toronto filmmaking: a series of formally accomplished, critically acclaimed works reminiscent of the city’s cinematic boom of the early 1980s, when Atom Egoyan and Patricia Rozema first garnered international attention. This new cohort includes several recent York University graduates, including Nicolas Pereda, Igor Drljaca, and Albert Shin, whose In Her Place garnered a surprising seven Canadian Screen Award nominations earlier this year.

Like their predecessors, these directors are finding some of their most appreciative audiences abroad. Over the past few years, it has been precisely this sort of rigorous, experimentally inflected Canadian cinema that has travelled furthest on the global festival circuit. Despite their often challenging formalism, these films have had real success, which in turn makes an idiosyncratic director Li seem less like an outlier than a possible harbinger.

As TIFF Cinematheque programmer Brad Deane points out in his notes for the series, Li and his peers are first-generation Canadians, which might account for the sense of curiosity in their work. Li explains that he was intrigued when he first arrived in Toronto to find a city that at once lived up to and exceeded a foreigner’s stereotypical expectations. “I came [to Canada] as a student,” Li wrote me in an email. “My first impressions of the country were that it was quiet, clean, orderly, had no pollution, and people were polite.”

That slightly bemused, almost ethnographic perspective is on display in Li’s 2009 feature, I Went to the Zoo the Other Day, which trails two Serbian friends during a visit to the Toronto Zoo. Their journey through the different pavilions becomes a suggestive metaphor for exploring an unfamiliar landscape. And their seemingly off-the-cuff conversations belie the meticulously designed camera movements and editing rhythms, which parallel the human and animal subjects. What begins as a mere chronicle of a summer afternoon mutates into a treatise on the difference between physical liberation and spiritual freedom.

Where I Went to the Zoo uses the conceit of outsiders wandering in a strangely controlled environment to code the director’s own early experiences as a new immigrant, the sensations in Li’s subsequent film are similarly subtle and glancing. Rivers and My Father (2010) doesn’t disguise its autobiographical element, rather places it front and centre. The film recreates events from Li’s father’s life, which are critiqued at the ending by the man himself. This is an amusing but also affecting choice that hints at the inherent perils of filmmaking—the idea that any attempt to represent reality is doomed to fail. In another filmmaker’s hands, this sort of epiphany about art and life could seem lugubrious, but Li structures Rivers and My Father playfully. He doesn’t frame himself as a tortured artist but rather a dutiful, loving son who imposes his own childhood experiences on his dad’s, and not out of selfishness. This beautifully composed family album of a film recalls the William Wordsworth line, “The Child is father of the Man.”

Li’s most recent films, Emperor Visits the Hell (2012) and Li Wen at East Lake (2014), are more challenging, and perhaps more rewarding. The former is a staging of three chapters from the Ming dynasty novel Journey to the West in a present-day gangster setting, with the joke being that Li’s spare, unadorned style diminishes the traditional excitement of genre filmmaking. The characters are emperors and river gods but they appear to us as regular-looking men in everyday locations, neatly eliding the deluxe presentation usually afforded to screen adaptations of ancient folklore and organized crime. The film’s deadpan affect actually clarifies the allegory of the original story, about the self-serving bickering and bartering of all-powerful deities. It’s clear that Li is using the tale of underworld power brokers to comment on contemporary corruption, which he steadfastly refuses to glamourize even as he gives it a grand, mythological dimension.

In Li Wen at East Lake, the eponymous actor (who also starred in Emperor Visits the Hell) appears as a policeman investigating rumours of a runaway river god. This happens in a community that is being rapidly redeveloped to accommodate a waterfront amusement park. (The underlying issue is entirely based in fact; part of the film uses documentary footage.) Where Emperor Visits the Hell is firmly in China’s past, Li Wen at East Lake concerns the erasure of history by a physical construction—the shrinking of East Lake—and a repressive sensibility that finds expression through the ideologies of different periods; at one point, Chairman Mao floats in the titular body of water. Wen’s character is a cop, but he’s also a painter, and as such embodies the collision between the lure of control and the yearning for free expression. It’s the same dichotomy that runs through each of Li’s films.

It remains to be seen whether Li will go home yet again in his filmmaking, but it seems likely. “Rapid changes have been taking place in China,” he adds later in his email. “It makes me feel an urgency to tell stories that are happening there. There are definitely stories to tell in Canada too, but I feel I can wait to tell them when I’m ready.”