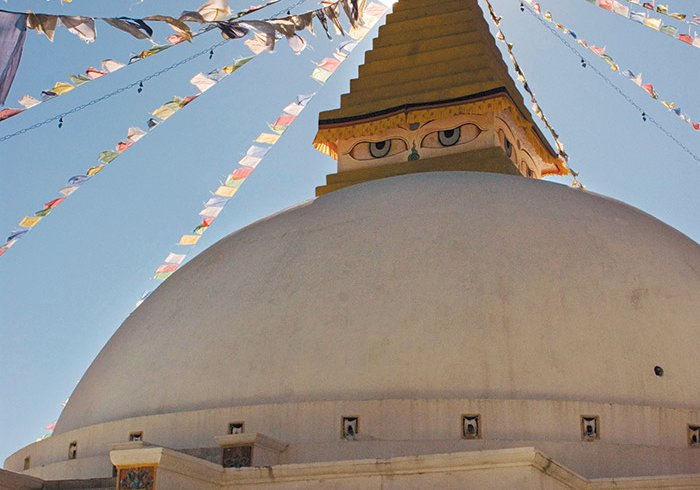 A towering chorten, with colourful flags, in Bhutan.

The creek comes brawling down the Himalayan slope, crashing over boulders and careening off fern green banks before falling into a still, dark pool. This is Membartsho, the Burning Lake, in central Bhutan. Here, in 1476, a Buddhist saint named Pema Lingpa discerned a temple under the water and, jumping in, retrieved a chest filled with scriptures and other treasures. Challenged by skeptics, he later plunged in again, carrying a lighted butter lamp. He emerged this time with a statue and another chest—and with the lamp still burning.

Treasures like those recovered by Pema Lingpa are known in Tantric Buddhism as terma, and may take the form of texts, relics, or even visions. They are increments of wisdom concealed by saints of earlier epochs, ready to be discovered when the unfolding of history requires their insights. This may be such a moment in history—and not only for Bhutan.

The tiny kingdom, just two-thirds the size of Nova Scotia, occupies a dramatic landscape of steep valleys and towering peaks. A rocky shelf chopped into the mountainside carries the nation’s only highway, a two-lane track that hairpins through forests of rhododendron, magnolia, and bamboo. The road climbs over mountain passes and twists down through tiny terraced farms into compact, busy market towns—Wangdu Phodrang, Trongsa, Punakha—where monks in red robes mingle with shopkeepers in traditional ghos and schoolgirls in kiras. Everyone chatters on cellphones.

The Function of Happiness

BEDMAS and the good life

How do you measure happiness? It’s simple! The Happy Planet Index, developed by the UK “think-and-do-tank” Nef (tag line: “Economics as if people and the planet mattered”), gauges individual contentment by weighing personal well-being against environmental impact. True happiness, it turns out, can be determined by this function:

Substituting the appropriate variables, your HPI is (roughly) equal to:

If the result is lower than you’d like, don’t despair. Nef offers strategies for boosting your score, such as “thinking whether buying that electric popcorn maker will really make your life any better than just making popcorn in a normal pan.”

These towns are each dominated by a huge white dzong, a fortress-cum-monastery that also serves as a district administrative centre; the surrounding hills are dotted with temples, shrines, and monasteries. Strings of vivid prayer flags—crimson, indigo, tender green—flutter over the streets, along the fences, on distant mountaintops, adorning every possible view. Rising from the flags, constant flights of prayers seek the welfare of all sentient beings in their vast cycles of reincarnation: aphids, bears, car salesmen. Dogs may be just one incarnation away from humans. Wandering dogs thrive in Bhutan.

In this landscape, saturated with life and vibrant with meaning, facts vanish into faith and legend and then reappear, still burning. The river gods, for example, are said to forbid the use of boats—and whitewater experts agree that most Bhutanese rivers are too shallow, fast, and rough for safety. Wisdom comes clothed as religion, preserved from rigidity and dogma by terma. Fundamentalism withers when the fundamental texts keep evolving.

Pema Lingpa’s descendants include the Wangchuck dynasty, which has ruled Bhutan since 1907. Perhaps it was the saint’s influence that in 1987 prompted the Fourth King to deny the basic premise of Western economics by remarking that “gross national happiness is more important than gross national product,” as surely it is. If prosperity fails to increase our happiness, what good is it? The king, however, also recognized that Bhutan’s long isolation was ending and had begun a policy of careful accommodation to the modern world. The process led to his own abdication in favour of his son and the conversion of his kingdom to a constitutional monarchy two years ago.

The first elected prime minister is Jigmi Y. Thinley, a Penn State graduate and a former royal administrator and diplomat. Short, intense, always wearing a colourful gho, he agrees that gross national happiness encapsulates deep Bhutanese values. Like many Maritimers, the Bhutanese believe that there is such a thing as “enough,” and that the essence of happiness and wisdom lies in wanting what you have.

Thinley has been deeply concerned, though, that urbanization, materialism, and a tolerance for violence are creeping into the culture, largely fostered by the introduction of TV and the Internet a decade ago. Believing that the government needed solid measurements of gnh, he turned to gpi Atlantic, a Maritime think tank that had produced a fully articulated genuine progress index for Nova Scotia several years earlier. The result is a set of indicators as rigorous as most economic measurements—and far more useful.

gnh rests on four pillars of value: environmental conservation; cultural preservation and promotion; sustainable and equitable development; and good governance, including the development of active and responsible citizenship. These pillars are divided into seventy-two quantifiable variables, designed to provide hard data about significant issues. One variable reflects Bhutan’s commitment to maintain at least 60 percent forest cover—forever. (In fact, 72 percent of Bhutan is forested now, and the country absorbs three times as much carbon as it produces.) Another focuses on the central government’s performance in fighting corruption. Indices exist for reciprocity, emotional balance, artisanal skill, and health knowledge. A couple of items measure the transmission of values to the young.

Wishing to entrench gnh beyond the uncertainties of partisan politics, Thinley last December asked GPI Atlantic to invite two dozen holistic educators from around the world to a workshop on education for gross national happiness. In Thimphu, they would be joined by Bhutanese educators, students, and officials—including the prime minister himself.

Sitting in concentric circles, half of them cross legged on the floor, the participants took two days to outline a “gnh-infused” curriculum and describe the ideal graduates. On the third morning, gpi’s Ron Colman told the stunned participants that the government had adopted the outline as policy. Would the workshop now design an implementation process? It would—and the government adopted that, too. Within two months, the education ministry had convened follow-up workshops for every school principal in the country, the beginning of a complete reinvention of Bhutanese education.

The outcome, said Thinley, should be “an educational system that is quite different from the conventional factory, where… children are just turned out to become economic animals, thinking only for themselves.” Instead, graduates would be “more human beings, with human values, that give importance to relationships, that are eco-literate, contemplative, analytical.” They would know that their own happiness was found in giving happiness “to your spouse, to your family, to your neighbours—and to the world at large.”

These are not words. They are terma. A ravaged world awaits its Pema Lingpa to reveal them, for the benefit of us all. 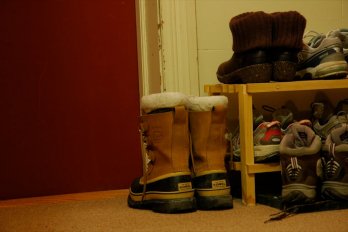