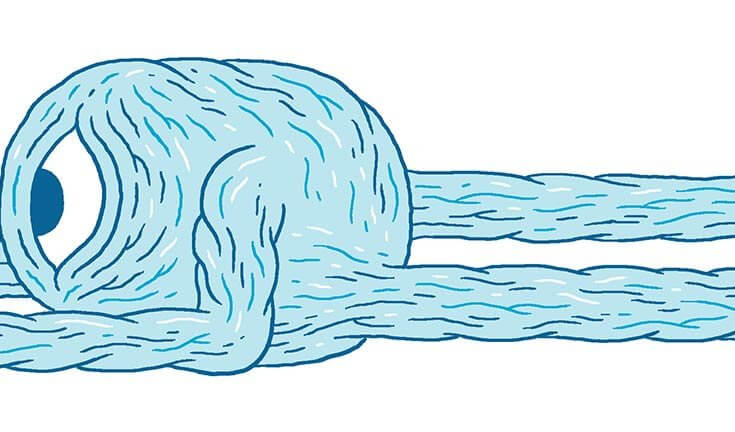 Jim Munro is giving his last tour of the catacombs, which is what he calls the labyrinthine space that runs underneath Munro’s Books—his legendary, half-century-old business on Government Street in Victoria. The basement, a legacy of the building’s former life as a bank, is a warren of secret rooms and steel vaults stacked with remaindered titles and overstock. In earlier days, he led some authors on this peculiar jaunt. “You were really special if you got the tour of the catacombs,” he says, climbing the stairs, his breathing laboured on this late-August afternoon. His gait, at eighty-four, is slow and methodical.

Later, a crowd surprises him in the store: former and current staff, friends, family, and patrons, all here to celebrate Munro’s last day at work. A kilted bagpiper walks into the foyer. Employees wave white tissues as they stand in a line, their eyes blooming red at the piper’s first note. Munro steps into their midst, wearing a navy pinstriped jacket with the six-point insignia of the Order of Canada fastened to his lapel. He is red faced and smiling, alternating between deflecting and accepting the attention. A reporter points a hulking video camera at him and begins an impromptu interview.

This is Munro’s send-off, but it’s also a passing of the torch. In a few days, the business will belong to four of Munro’s long-time employees. It is an unusually generous parting gift. “I don’t need it,” Munro says. “I don’t have a yacht, and I’ve got my RRSPs.” He owns the building but plans on being a lenient landlord, charging his successors one-third the current downtown rate to ensure their prosperity and ability “to carry on the name.”

Munro’s Books is part retail space, part CanLit phenomenon. On a typical day, classical music plays over the sound system, accompanied by the creak of hardwood floors underfoot as readers shuffle from one section to the next, an atmosphere as hushed and as holy as a cathedral between masses. The entrance sits under a large arched window, flanked by tall stone columns. Inside, seven-metre coffered ceilings mimic the ruins of the great library at Ephesus. The fabric collages that hang below, by Munro’s wife, textile artist Carole Sabiston, suggest the vistas that lie beyond the store walls—seascapes at sunset and dawn, along with the four seasons.

Munro opened his shop, several blocks from here on Yates Street, in 1963—with his then wife, one Alice Munro. In an age of hardcover dominance, they sold paperbacks by the major writers of the 1920s and ’30s. After a number of requests for books by an up-and-comer named Leonard Cohen, they relocated the poetry section to the front of the store. Theirs was the first shop in Canada to carry titles from the famed American publisher City Lights. “Victoria was sort of San Francisco North,” says Munro. “Back in Toronto, they didn’t have a clue what was going on.” Those first few decades were heady, with rowdy parties for visiting authors, such as Margaret Drabble and Ian Rankin, hosted at Munro’s sprawling mansion in the city’s historic Rockland enclave. “There are not so many wild parties anymore,” says his eldest daughter, author Sheila Munro, who worked at the store in her early twenties.

Now, Jim Munro is forbidden from carrying heavy boxes or climbing ladders, and his workload has been significantly reduced over the past fifteen years. What remains the same are the store’s guiding principle (it is a bookstore first and foremost) and its mission to champion Canadian literature. There are no major transformations in the works. “Jim’s recipe for success lasted fifty-one years,” says manager and now co-owner Jessica Walker. The retailer weathered online shopping, big-box stores, and the ebook—and has come out relatively unscathed, buoyed by tourism and seasonal sales spikes but kept afloat, really, by sheer charisma. Readers like a good story, a sense of place, and well-developed characters; Munro’s Books, both in its history and its finely curated stock, has all of these literary elements.

As the clock nears 3:30 p.m., the end of Munro’s workday, he concludes his interview with the cameraman and gets ready to go home. The piper strikes up “Scotland the Brave,” and Munro, flanked by Sabiston and Walker, begins his final march around the store. Past the new releases and the hardcover non-fiction; then down around the remainder tables, skimming the magazine racks, and skirting the children’s area; and finally through the Canadian literature section, out the arched doorway, and down the street to a waiting 1936 Daimler. Everyone follows, hooting and clapping, as Munro ducks into the back seat. The car drives away, honking, and just as it disappears from sight a voice calls, “Goodbye, Jim!”

Emily Urquhart is a writer based in Kitchener, Ontario. Her work has appeared in the Globe and Mail, Azure, and Hakai Magazine. Her newest book is The Age of Creativity: Art, Memory, My Father, and Me (Anansi, 2020).
Jesse Jacobs