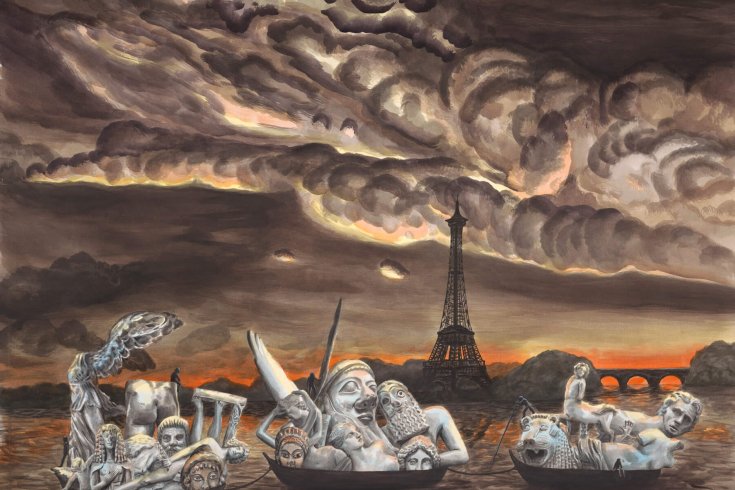 The conservator waded gracefully through the European galleries, parting water as he passed the archives. His good pants, cuffed in castaway tatters, ballooned above his knees. Scavengers splashed about with their heads poking through Rembrandt portraits, lace collars framing their faces. Even he had to admit the effect was hilarious.

Drought, fires, hurricanes, the poisoned air, face masks, and food wars. The seawater rose tight along the coast, then brimmed over. For a moment, there was a sweet relief from the heat. Most expired. The survivors who had started out with less had less to lose and seemed to adapt better to the changes.

The ultrarich were gone to the moon, leaving the blue-chip artists behind. The artists were unsure of their legacies; who would evaluate them if not the future? Investment speculation and the Opening Night Gala eloped to some sexless bunker, trying to figure out how to open a can of beans. The auction hammer went silent; studio assistants floated by, clinging to chunks of driftwood. No one rescued the secondary market.

The conservator found the door to the restoration studio and pushed with fragile might. His memory was wracked from starvation and rickety with age, but he was sure about this Francis Bacon left on the easel half a century ago. The Bacon had smoke damage. He had been in the process of cleaning it with a soft slice of Wonder Bread and his own spit when the sirens went off. In the years of chaos that followed, the Bacon had fouled. But, in the nuclear sunset of his life, the conservator remembered its sheer sadistic vitality. And he hungered for it.

Outside, the sun’s staring problem was especially aggressive to white skin. Brown and golden skin fared better. The weaker their connection to the land and water, the harder it was for people to adapt. Survivors turned to those who had maintained continuous ties to the earth. Dog-strangling vine choked Ottawa. Crown-Indigenous Relations and Northern Affairs had been struck by a gigantic ball of lightning and its billion files had exploded into toxic stars that fell into ash. With the government dissolved and population decimated, national identity finally gave up the ghost. The old white mothers and fathers had perished, leaving behind a new generation who saw the founding project of Canada as a genocidal, gas-lighting, racist, capitalist, colonial, resource-extraction shit show. The work of these surviving youth was to dismantle the relics of their own white supremacy and collect dues for the Manifesto of Reparations.

Nothing could heal until the original wounds had been attended to. The betrayed Earth demanded to be returned to Indigenous stewardship. It took the crisis of mass extinction to make it so.

Abeam of unnatural daylight bisected the museum’s restoration room, drawing the conservator toward the Bacon. His face was magnetized to the canvas. By long habit, his eyes calculated the fading pigments. The glory of red was lost. Blue had crashed. The pinks were swaddled in a shroud of mould. But the conservator hadn’t come for the colour. His eyes swung up to the broken window as a canoe from the Oceania Department floated by, packed to the gunwales with neoclassical statuary. He heard the familiar songs of the body collectors as they rafted the dead to burial. He sank his hand deep into his pocket to draw out his knife.

Cutting the canvas away from the wooden stretcher in a clean rectangle, the conservator softly tore the Bacon into thin strips along the grain. Selecting one precious tendril like a Chaplin bootlace, he lifted it toward his mouth and let his saliva begin the slow, delicious dissolution of the rabbit-skin glue.

Nearby, deep in a vine-cloaked ravine, some rubble under the overpass had given way to reveal a fissure in the earth. Cool air trickled out, with the faint erotic smell of wet cement. A girl had been living in the ravine, hunting raccoons. There was a group of Creatives of all ages, a collective. Most of them were sexed female or ambiguous; a legacy of plastics. Males hadn’t been born for decades—the salamanders could barely resist an I told you so. But this was okay, as it meant the patriarchy was finally over. No more school shootings! No more dick pics, no more Fords, no more military cover-ups, corporate bonuses, popes, or BBQ. It was too late for museum acquisitions parity and international solo shows, but long-dormant seeds were stirring. Their grandmothers had taught them how to survive trauma, and some of those lessons involved slipping through cracks. The gender ambiguous and females were very good at this and knew how to find hidden entrances.

Through the doorway in the ravine, our gently gendered collaborators descended single file toward a cool blackness. They squeezed through this damp and narrow passage, clinging to the sound of their breath. There was no turning back. Just as panic bore down, they felt the space radically expand and bumbled into it. The dripping of water echolocated wide clay walls. It was a cave system. The clay sounded like porcelain. Was it an abandoned subway station? Somebody struck a match.

The strike illuminated the station. Quickly, the collective lit a fire, and the movement of the flames animated their shadows along the long tiled wall. Helping each other, they dropped onto the tracks and explored for clues of sheltering and ritual. There were a few small skulls and spilled pop, still sticky. A bare footprint in the dirt that was not quite human. That mystery was solved moments later with the discovery of a red-haired orangutan corpse nestled under the platform’s edge. An escapee of the Toronto Zoo. Her parents had been born in Borneo. They started the song they sang for the dead—the acoustics down there were amazing.

It was natural to act out the story of the orangutan. Someone picked up a torch, and their shadows grew wild and strange. When the song was over, they drifted together toward the wall. One by one, they held their hands aloft and traced their fingers across the tiles with looted lipstick. They were here.

Shary Boyle is a visual artist and performer who lives in Toronto.