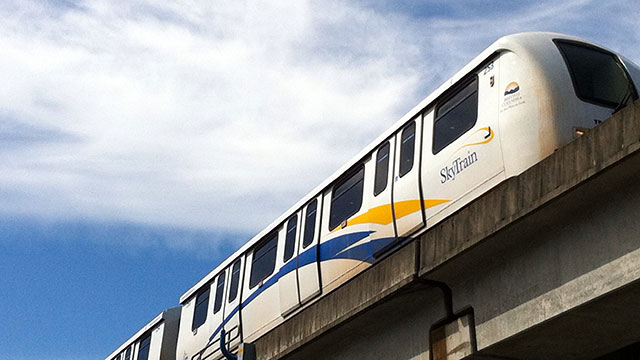 Vancouver’s Transit and Transportation Referendum has failed: Roughly 62 percent of Metro-area voters said No to anteing up $2.5 billion in new taxes to pay for regional transit improvements—including major road upgrades, bus-route expansion, a new bridge, a new light-rail transit system and subway, and an expansion of the region’s pedestrian and cycling routes.

For Yes voters, the result was disappointing, but not surprising. I live in New Westminster, one of the outlying municipalities in the Greater Vancouver Regional District. Though I work mostly from home, I often do business in downtown Vancouver. Driving time is about thirty minutes either way, plus another five to ten minutes devoted to a loop-the-block search for street parking (often followed by surrender to an overpriced pay lot).

If I time it right, TransLink’s SkyTrain (which I access using a charming, but maddeningly irregular, wee neighbourhood bus) gets me to Gastown in about the same amount of time as driving. Of course, riding transit has its drawbacks as well, especially at rush hour. But I often find an empty seat and get some work done. That additional hour to peck away at an article or editing project is a blessing. And I’m keeping an extra car off the road.

I voted Yes for a 0.5 percent sales tax increase because I wanted, and still want, more SkyTrain cars, more buses, more bike lanes, less traffic, and less carbon emissions in Metro Vancouver. In my naïveté, I believed these all to be uncontroversial objectives. More transit means more options, and more efficiency, for everyone: students, parents and their children, workers of all types. It means less traffic, so those who do drive get to where they’re going faster.

So how did we get to No? Explaining the whole lousy, convoluted, infuriating process from beginning to end would test any reader’s patience. So I’ll condense things a little—and reward your attention with three takeaway lessons that might inform other cities in need of better transit.

The story of the failed referendum begins with Liberal premier Christy Clark, who was looking to win re-election in 2013. During her campaign, Clark’s provincial Liberals ran against Adrian Dix, an NDP leader so weak that most BC voters probably can’t even remember his name. And yet, in the early lead-up to the election, Clark found herself trailing in the polls. When a prominent newspaper ran a story titled, “If This Man Kicked a Dog, He’d Still Win the Election,” they were talking about Dix.

But Clark was shrewd. When asked how her government would fund needed transit improvement in the Lower Mainland—an area one three hundredth the size of the province but with over half its population—the premier promised that voters would get a chance to approve via referendum any new funding scheme. British Columbians liked that: it gave them a sense of control.

Against the odds, Clark was re-elected. Cue the rending of progressive garments and gnashing of progressive teeth. And cue the uncertainty. No one, including Clark herself, thought she really would have to deliver on her referendum promise.

Even the most condensed version of this story must provide some mention of TransLink—Metro Vancouver’s transportation network. Back in 2008, a previous Liberal government had stripped the body of its elected board of mayors and city councillors, replacing them with well-paid corporate appointees with backgrounds mainly in real estate and finance. This backstory is important because it meant there was no politically independent leadership at TransLink, no public face or faces, and no one to respond to complaints or take responsibility. In short, there was no one to lead. (Having a non-elected board for a major transit authority is an anomaly in North America. In Metro Vancouver, we take the trouble to elect representatives to our parks board, but not to an agency with a $1.4-billion annual budget.)

The other bit of critical history here is the recent uptick in consumer distrust of TransLink itself. This is partly due to technical breakdowns that left thousands of SkyTrain riders stranded on at least two separate occasions in 2014, and partly due to a fare-card system known as Compass, which has been delayed for years and plagued by nine-digit cost overruns. Useless Compass wickets at every SkyTrain entrance remind riders several times a week of all the money that has been wasted.

All this, as well as the high salaries paid to the appointees running SkyTrain, was top of mind among voters thanks to Jordan Bateman and the Canadian Taxpayers Federation. In its no-side activism, the CTF received tactical help from Stephen Harper’s former aide-de-camp, Hamish Marshall, one of the minds behind the “Ethical Oil” campaign. As Marshall put it in classic Tea Party-ese: “We’re up against all the big labour, big business, big environmental groups—all the elites. I love the idea of working on a campaign where we can stand up for the little guy.”

The mayors, having long been cast out of the TransLink authority structure, didn’t want a plebiscite: creating winning conditions takes time and, usually, a lot of money. Transit referenda are common in the United States, and over the past fifteen years, their boosters have enjoyed a success rate upwards of 70 percent. But the winners generally have given stakeholders one or two years to invite public input and develop a campaign. In BC, the time between the approval of the plebiscite and the start of voting was only three months.

The mayors also were resistant to the prospect of hiking property taxes to pay for transit—and so they arrived at the idea of a sales tax bump. They attracted support from a broad-based coalition, one that included not only the usual progressive suspects (unions, NGOs, students) but also the Vancouver Board of Trade and occasional anti-tax activist Bill Tieleman. By April, there were leaflets and signs at bus stops telling voters how many new buses (400) and SkyTrain cars (220) would be purchased, how many kilometers of bike lanes would be added (2,700), and how much late-night transit service would increase (80 percent). They lost anyway.

What can Canada’s transit-hungry progressives learn from the Vancouver case study? Here are three lessons.

Or, put another way: Don’t get sucked into a plebiscite by a politician trying to dodge responsibility. Yes, a referendum process might kick-start a regional conversation, but there is no guarantee that the conversation will be an intelligent one—particularly if the issue in question is a massive, complex package of multimodal upgrades in far-flung jurisdictions. (TransLink, unlike the Toronto Transit Commission or the Société de Transport de Montréal, oversees roadwork and bridges as well as transit, and extends into twenty-one municipalities.)

I could see an argument for a plebiscite in regard to a single megaproject, such as the $3-billion Massey Tunnel project that Premier Clark approved without any public input (in which a pinch-point freeway tunnel under the Fraser River is not simply being expanded but replaced with a massive eight- to ten-lane bridge—presumably so she can dredge the river for her beloved LNG tankers). But when it comes to the kind of comprehensive package at issue in the Vancouver referendum, Canadian cities and provinces are better off relying on representative democracy. Transportation and planning experts deal with complicated metrics, cost analyses, and budgetary issues that make the average person’s head spin. The political officials who are advised by these experts are elected to make decisions that may be controversial in the short term but essential in the long run.

If Canadians were asked by direct referendum if they wanted to spend their tax dollars on every new hospital or school, we would be considerably short on sickbeds and classrooms. If Torontonians had been plebiscited for their support of the Metro lo those many years ago, would it ever have been built?

2. Beware the power of anecdote

I love my downstairs neighbour. Like her husband, she is kind, thoughtful, and responsible. She’s also an accountant who gives freely of her time to help run a local council. While having a glass of wine with the two of them on the patio several months ago, we started talking about the referendum, and I was surprised to hear that she was against it.

“Where’s the accountability? ” she said. “You have to show me the accountability.” She then proceeded to cite a fact she had heard: that a large share of people who ride transit don’t pay their fares. Rather than bleeding her wallet for more money, she asked, shouldn’t TransLink do a better job of enforcement? Surely they could recoup enough money if they did that.

As it turned out, this was a red herring tossed into the public debate by the CTF team and gobbled up by the media. As New Westminster city councilor Patrick Johnstone put it on his blog:

The latest CTF anti-transit rhetorical volley is based on data released on the ‘no fare paid’ button on TransLink buses . . . Drivers counted 2.76 Million incorrect fares in 2013, which is an increase of 250,000 over 2011. [But] in 10 seconds on Google, one can [get] TransLink’s financial disclosures, and find that there were 355-million boardings [on] the TransLink system in 2013. That means 2.76-million ‘non-fares’ represent 0.8% of boardings. In a rational world, an organization as worried about the public purse as the CTF would be touting TransLink’s phenomenal record of collecting fares from 99.2% of passengers on a crowded, chaotic, distributed system with literally thousands of moving fare collection stations comprising what is, essentially, an honour system.

Unfortunately, I knew none of this when I spoke to my neighbour, and could only say, “Is that really true? ” A sad truth is that out-of-context statistics, spicy-but-unverifiable anecdotes, and other aromatic baitfish rule the day in plebiscites as much as they do in general elections.

3. Give transit agencies the tools to fend for themselves

As public transit consultant Jarrett Walker wrote in a blog post about the epic plebiscite fail: “Hating your transit agency is easy and fun.” He’s right. Just ask Torontonians, who routinely use their own TTC as the punch line for gags. But instead of trading in this easy mockery, we should be protecting our transit agencies from having their governance undermined by provincial politicians. We should be fighting to retain elected boards, with a strong marketing department that can frame successes to counter the litany of misinformation.

It’s easy for many of us to fall into revenge voting when thinking about transit delays or the high salary of a transit CEO. It’s less memorable a media story to note, as in TransLink’s case, that the system you love to hate actually happens to be number three in North America for cost-per-journey efficiency. A capable PR communications team needs to be out there hammering those kinds of transit truths in the media.

A faceless organization with no public persona to challenge anti-taxers is helpless. The result is that anti-taxers get a free hand to frame the debate as they see fit. That’s what happened in Vancouver this year. Let’s make sure it doesn’t happen anywhere else.

Tyee Bridge (tyeebridge.com) has written for Vancouver Magazine, the Globe and Mail, and the Vancouver Review.