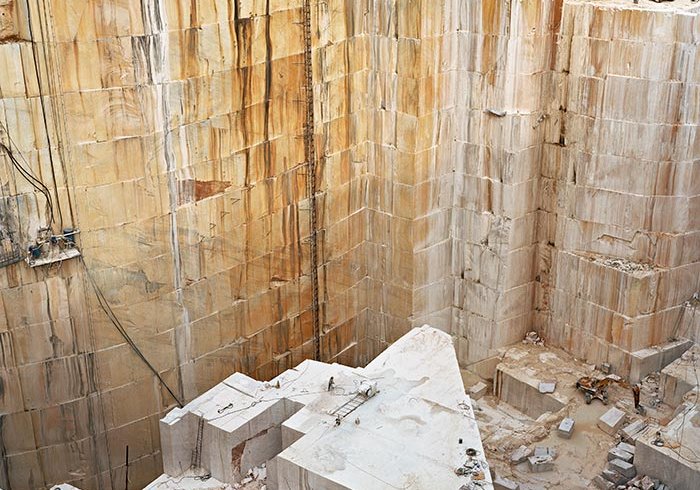 Our greatest experiment—civilization itself—will succeed only if it can live on nature’s terms, not man’s. To do this we must adopt principles in which the short term is trumped by the long; in which caution prevails over ingenuity; in which the absurd myth of endless growth is replaced by respect for natural limits; in which progress is steered by precautionary wisdom.
—Ronald Wright

Last year, I was in northern Portugal, near the Spanish border, photographing marble quarries. It’s a beautiful part of the world—the Atlantic Ocean lapping up on the shores, the Montes de León in the distance, the people generous and curious. But the region is also peppered with quarries, both large and small, and I was struck by the amount of cut stone sitting idle, with no apparent owner. I asked my guide, a quarryman in these parts for twenty years, about the abandoned rock. He explained that in the past, when extracting techniques were less refined, practically all of the quarried rock found a market: the fine grades were for flooring and sculpture; the lesser, flawed stone, crushed into a near dust, for foot powders and toothpaste. The backlog of unwanted stone is the result of choice, he said.

More efficient extraction techniques allowed for blocks to be removed at a lower cost, and more elevated tastes and specific consumer demands forced buyers to be more selective when choosing stone for their respective markets. Blocks showing even minor flaws were passed over. So, after many years of accumulating this secondary material, the region’s natural beauty is marred by vast graveyards of rejected, unwanted stone. As markets change their tastes, they also create a great deal of waste. I consoled my guide by saying that as the price of oil rises, the cost of extracting, lifting, cutting, and transporting stone would also rise. This would make all this secondary rock much more attractive. It was a guess.

In the 1970s, while working as an underground gold miner near Red Lake in northern Ontario, I visited many large, open-pit mines. The size of these holes was striking, and I began to think about how to express monumental scale in photographic terms. Canada itself, of course, is monumental, a vast expanse of land and water with few people, and I wondered about the relationship between scarred earth and human need. In many respects, my work has from the beginning been a meditative lament for the ongoing and dramatic loss of our natural environment and our flawed relationship with that world. Were I born in a country less privileged with unspoiled wilderness—a country like Portugal, perhaps—I would no doubt have a different view of nature. (Scarcity can frame the mind in very distinct ways.) In that sense, my work, all of it, is profoundly Canadian.

Throughout the developed world, practically everything was long ago divided up—farms seeded, trees cut down, forests replanted or not. Where civilization has marched, few people know anything about original, pristine settings. Canada is different, or at least potentially so. We are blessed with an abundance of unadulterated space, and I have always loved canoeing and hiking in our remote regions. Experiencing raw spaces has given me a reference point for understanding what I have come to call a geological time consequence.During the 1980s, I made numerous attempts to photograph raw, unaffected natural spaces. But we all understand wilderness images, and it seemed almost impossible to keep my own from being drawn down by the gravitational pull of clichés. In 1983, I set out in a Volvo station wagon on a four-month exploration of the North American mined landscape. It was the beginning not of an environmental project, but rather of a visual update on the ages of humankind, from stone to bronze, iron, and onward, a never-ending forward thrust. Rock and metals are alive and well, I discovered—these ages existing on a scale so immense that even 100 years ago it would have been impossible to imagine their scope. Relatively inexpensive energy—due, in large measure, to improved efficiencies in the oil-and-gas sector—and the more than doubling of the human population over the past sixty years, have inexorably altered our present age. But though history may get buried under the march of progress, if one looks in the right places it is never extinguished. There are locations that put older ages in sharp relief, just beneath the surface.

We have always taken from nature. This is normal, part of the human condition and, indeed, a fact of life for all life forms. What is different today is the speed and scale of human taking, and that the earth has never experienced this kind of cumulative impact. We don’t see it as extraordinary because it evolved incrementally, but the result is monumental. If my images appear surreal at times, it must be remembered that they depict our extractive world as it is. The trick—now, as on that initial exploration—is to provide photographic images that leave meaning open, an ambiguity necessary to gain access to sites, engender discussion, and steer clear of polemics and clichés.

Thirty years after chasing down my subject, I sense that we are entering a new age. Never before has an entire generation been told in such convincing terms that the values and ambitions we assumed to be good and true, and that we fought long and hard to establish, are, in fact, killing us. Few voices in government or business have acceptable or timely solutions to reverse the deadly march of progress. By slowing the machinery of industry, governments risk creating massive unemployment, we are told, and I can accept this. But still, the evidence of humankind’s carbon footprint is growing daily. The biosphere is at a breaking point, and it will lash back in ways more deadly than the social and economic threats—crime and revolution, an even larger divide between rich and poor, etc.—that critics say will result from scaling back. We are being tested.

Around the world, Canadians are regarded as nature-loving people, but given our mad rush for oil in the West (and East), the clear-cutting of old-growth forests, and the collapse of our fisheries, it is an outdated, even curious designation. Our boreal forests are as vital to ecological diversity and carbon capture as the Amazon basin—two great lungs, without which we would fry to a crisp—but while much has been written and said about the Brazilians hacking away at their precious resource, little is said, or written, or even known about our own. With what is going on in the forests of northern Alberta, we may be on the cusp of destroying an irreplaceable contiguous ecosystem. Tree planting is fine, but saplings take years to grow into effective carbon sinks.

By virtue of this country’s seemingly limitless space, and more particularly by virtue of our specific history, Canadians have developed a fairly unique relationship to the environment and to the geological time consequence. For 200 years, much of Canada was actually a corporation, the Hudson’s Bay Company, whose chief purpose was to extract. First came pelts, then trees, and then with Confederation the railroad, our first great nation-building project, and the extraction of minerals on a significant scale. We may think otherwise—especially in the increasingly urban metropoles that are now redefining the nation—but Canada’s natural resource wealth has always been for sale, for the taking, and we have all benefited enormously from this. It’s on us, as athletes say before a big game or after a big loss.

The current crisis crept up on us partly because government structures—the ministries of the environment and natural resources, for instance—were from the beginning subservient to the all-important role our governments and corporations played in opening up the land and water to the ages of extraction and progress. It turns out that Canadians are thought of as nature-loving not because of specific actions taken, but because we have more wilderness than anyone else. The postcard images are fabulous, but the question now is: “What will we do with this natural bounty? ”

I realize that in some respects my photographs are shocking, that to some they represent answers rather than questions. This is not my intention. I’m still in that old Volvo, and my work is still an exploration. But the photographs are real, and it is worth asking, I believe, what we should do with them.

Consider a different picture. Consider that the oil already extracted from the Alberta tar sands represents a tiny percentage of the region’s estimated reserves; that this area is already one of the largest surface-mining operations in the world; that it includes one of the largest toxic lakes ever created. Already the region looks like a vast dystopia, out of sight for most of us—but for how long can the secret hold? British Columbia novelist William Gibson has written: “It is becoming unprecedentedly difficult for anyone, anyone at all, to keep a secret. In the age of the leak and the blog, of evidence extraction and link discovery, truths will either out or be outed, later if not sooner. This is something I would bring to the attention of every diplomat, politician and corporate leader: the future, eventually, will find you out.” Picture the age of evidence extraction.

Canadians have a choice: to elect leaders who have a vision of how to make sustainable development real or to carry on with our business and history as usual. What we have going for us is general well-being, a decent heart, and educated people sitting on a very large chest of gold. If resources are what we have, and sustainable development is what we want, then why not get on with a new age: extracting what we need without destroying the places we take it from.

Their new project Anthropocene includes a documentary film (ANTHROPOCENE: The Human Epoch) which is now playing in select Canadian theatres, two complementary museum exhibitions now on at the Art Gallery of Ontario and National Gallery of Canada, and an art book published by Steidl.