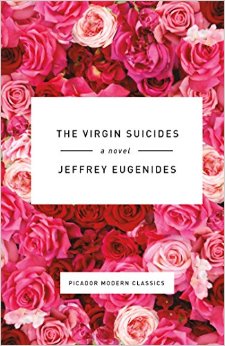 The Picador Modern Classic cover of

According to the publisher Picador, The Virgin Suicides, Jeffrey Eugenides’s 1993 debut, is now a “modern classic, a lyrical and timeless tale of sex and suicide.” Last month, the novel joined Herman Hesse’s Steppenwolf and Marilynne Robinson’s Housekeeping as part of a series of smart, jacketless miniatures that, should you squint, could double as Victorian vanity editions. It’s easy enough, of course, to balk at book marketing; after all, isn’t a novel canonized (or not) at the whim of the ruling party of critics, editors, educators, and other imperialist heavies? Isn’t “the classic” what graduate curricula call a “construct” ?

Nevertheless, the notion of the classic matters to people who buy books. Moreover, Eugenides’s novel has persisted. To those entrusted with filling classroom silence, it’s a conversation starter; to young readers, it’s a rite of passage—or a pivot into puberty. (“I turned thirteen, and then I read The Virgin Suicides,” says wunderkind and magazine editor Tavi Gevinson.) Then there are the hipsters of a certain cohort (the present author bows his head here) who saw in Sofia Coppola’s stylish 1999 film adaptation a style manual.

But if The Virgin Suicides is a classic, it’s also a time capsule, an exemplar of the thwarted detective fiction common in the ’80s and ’90s. The novel proposes an especially opaque mystery—Why did five teenagers commit suicide?—and then doubles down on the frosted glass. “In the end we had pieces of the puzzle,” explains the narrator, “but no matter how we put them together, gaps remained, oddly shaped emptinesses mapped by what surrounded them, like countries we couldn’t name.” Teachable to a fault, Eugenides’s novel has all over it the fingerprints of an era obsessed with signs, maps, legibility, the embodied text, the gap between signifier and signified, and other useful classroom props.

Eugenides’s novel is narrated in first-person plural by a group of men who, as adolescents, lived in purple-prose-inducing proximity to the Lisbon sisters: five teenagers presided over by a puritanical mother and father. Early on, one of the sisters, Cecilia, hurls herself upon a spiked fence. Following her suicide, the remaining sisters are kept under tight wraps—and surveillance constricts further when Lux, the Lisbon outfitted with a rebellious streak, fails to make it home on time after the one and only dance the girls are permitted to attend. The Lisbon house promptly falls into the sort of Gothic decay that allows teachers to talk genre. Meanwhile, the boys across the street struggle to find ways to communicate with the girls. The novel ends with more suicides, which will haunt the narrators, for whom the sisters function as a five-headed Lolita—or a troupe of manic pixie dream girl guides.

There’s much to admire about the book, including the collective narrative voice that predates the watercooler “we” in Then We Came to the End, Joshua Ferris’ 2007 novel about workplace. There are also the hi-res set pieces, more vivid and telling than any teen’s Tumblr:

“He came back to us with stories of bedrooms filled with crumpled panties, of stuffed animals hugged to death by the passion of the girls, of a crucifix draped with a brassiere, of gauzy chambers of canopied beds, and of the effluvia of so many young girls becoming women together in the same cramped space. In the bathroom, running the faucet to cloak the sounds of his search, Peter Sissen found Mary Lisbon’s secret cache of cosmetics tied up in a sock under the sink: tubes of red lipstick and the second skin of blush and base, and the depilatory wax that informed us she had a moustache we had never seen.”

Through the accretion of precise detail in this scene, Eugenides disperses some of the purple fog; the girls, it turns out, are less ethereal than the boys thought. But there’s craft here, too, a subtle latticework of alliteration—for example, “crumpled,” “crucifix,” and “cramped.” The novel is at its best in these moments, when it employs precise but artful prose to bring focus to bric-a-brac or to put a point on details. After Cecilia is retrieved from the fence, the exposition is especially exacting: “As they carried her away, the sawed-off stake lifted the sheet like a tent post.” Eugenides is careful to cut the dry ice generated by the boys with the occasional beam of crisp light.

The book is at its worst when, instead of putting a point on the details, it resolves to have points to make: the past can’t be recovered, for example, or truth is hopelessly subjective. Eugenides styles his present-day narrators as middle-aged, amateur detectives. They interview witnesses, fuss over photographs, and refer us to various exhibits. The men, of course, aren’t actually detectives, or even characters, really. At times they seem like little more than stylized obsessives, serving at the pleasure of the novel’s epistemological lectern.

They also belong to a lineage of pseudo-sleuths, including somber Patrick Lewis in Michael Ondaatje’s In the Skin of a Lion (1987), the doomed obsessives in Paul Auster’s New York Trilogy (1985–1986), and the questing poets in Roberto Bolano’s The Savage Detectives (1998). The Virgin Suicides is in part a product of a pre-Pinterest time when old photos and the contents of archives produced pangs of hopelessness in the hearts of our novelists, and when efforts to drag the past could only flounder.

More generally, the novel unspools plenty of rope with which those characters who dare to seek something like truth can tie their necks. Experts are summoned so that they can be dismissed. One character, a reductive journalist who covers Cecilia’s suicide, seems to exist to boil off nuance. Another character, a doctor, guesses that the Lisbon sisters had PTSD, but he also describes them as “lemmings.” (Men of science are jerks like that.) The novel reels off a series of suicide stats, which the sort of person who self-selects as a patron of literary novels isn’t expected to take seriously. It even presents a television show that gives airtime to young people who have attempted suicide. But the narrators are too hep to be convinced: “We listened to them, but it was clear they’d received too much therapy to know the truth.”

Near the end, the narrators conclude that “The essence of the suicides consisted not of sadness or mystery but simple selfishness,” and that “we will never find the pieces to put them back together.” But that’s not quite right. What really killed the Lisbon sisters—what tied one to a beam, consigned another to carbon monoxide—was a literary Zeitgeist that fetishized epistemological problems. And yet what readers remember about the novel aren’t the photos, nor the lost records, nor the gaps dutifully circled. What readers retain are living, illuminated images like that “white stripe Uncle Tucker later saw on Lux’s coat [which] came from the goal line she lay down upon. Throughout the act, headlights came across the field, sweeping over them, lighting up the goalpost.” That’s blindingly good, and mirrors the moment in Lolita, an obvious influence, when the young Humbert Humbert and his proto-beloved “found a desolate stretch of sand, and there, in the violet shadow of some red socks forming a kind of cave, had a brief session of avid caresses, with somebody’s lost pair of sunglasses for only witness.”

Whether or not The Virgin Suicides is a classic is beside the point. When the novel holsters its heavy hands and simply observes adolescence in all its tactile detail, it produces moments that threaten to stay with readers forever.