Escape from Fort Mac | The Walrus
Skip to content 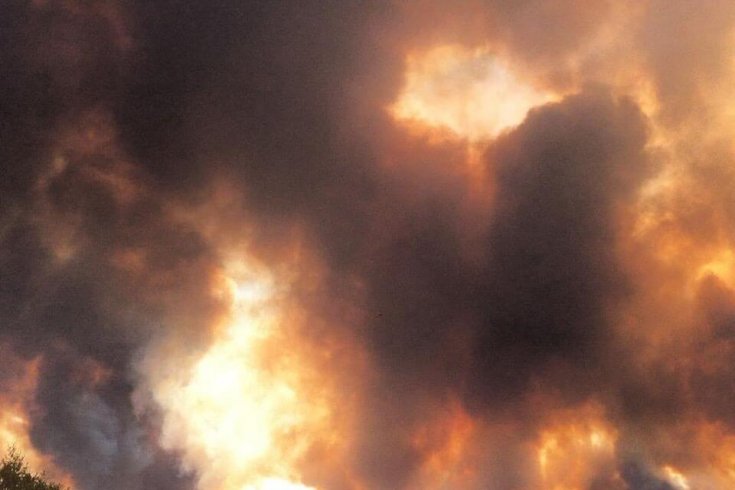 On the afternoon of May 3, Tara Robertson stood in her front yard in the Fort McMurray community of Thickwood, talking to her neighbour as they both stared up at the cloud of black smoke stretching across the sky. Set against a red sun, it looked like a scene out of an apocalypse movie.

Robertson hadn’t been worried about the fire, until now. The smoke had been bad the day before, billowing above the houses across the street. Her three children had woken up that morning with sore throats and headaches from the acrid air. Chunks of ash fell from the sky like snow. But it was the beginning of forest fire season, when smoke commonly wafts into the city after some remote expanse of wilderness in northern Alberta or the Northwest Territories lights up. The Athabasca River, which bisects the city, would surely shield them from the blaze, she thought.

By the next morning, the fire had grown from 1,250 hectares to an estimated 2,600 overnight, but the wind was blowing away from town. Her husband, Doug, left for his job as an oil patch truck driver. Their children headed off to school. Tara got to work in her home as a virtual assistant and social media manager.

Then the direction of the wind changed. A spot fire crossed the river and began encroaching on the city. At about 1:30 p.m., a voluntary evacuation order was issued for her neighbourhood. Her children’s schools were being evacuated. Tara grabbed her purse, computer, and Shadow, the family’s black cat, and headed for the door. She figured she’d be back soon. Outside, her neighbours were calmly packing up as well. “I really think everyone thought they had more time,” she says. “Everything happened so fast.”

While picking up her nine-year-old daughter and two sons, ages twelve and fourteen, Tara heard over the radio that the evacuation order was now mandatory. They couldn’t go home. Traffic through town was backed up—the typical fifteen-minute drive to the junior high took an hour and a half. The streets were hazy with smoke. That afternoon, videos posted on social media showed people driving south along Highway 63, flames licking at the trees abutting the road, embers flying through the air.

Once at the highway, Tara had no choice but to go north: the route southbound to Edmonton had been closed. It was around 5 p.m., and there was no denying the danger anymore. Motorcyclists drove down sidewalks, and vehicles bounced up and over medians. Her eldest son, who has autism, couldn’t stand the thought of their house burning to the ground. Her daughter kept crying. “It was chaos,” Tara says. “It was like the 401, in the middle of the worst rush-hour traffic, all through town and then all along the highway.” Doug was working north of the city that afternoon. His boss told him to abandon his truck, and he waited on the side of the road for his wife to pick him up.

At 6:20 p.m., the Regional Municipality of Wood Buffalo ordered a mandatory evacuation of the entire city. The Robertsons’ van was one of hundreds of other vehicles at near-standstill in an endless stream of brake lights. They tuned into one of the local radio stations, but when that was evacuated they listened to the CBC’s province-wide news updates. There were oil-sands camps along the highway that were opening their doors to evacuees.

The first few camps they passed were already full, so they kept driving—pulling over every so often so the kids could get out to stretch and go to the bathroom. All the commotion—the traffic, the people on the side of the road—was a much-needed distraction for children, helping them temporarily forget their city was aflame, says Robertson. Over the next several hours, they played with Shadow, who was not at all pleased at being cooped up in the van. But when the kids turned around to look through the back window and saw the smoke staining the sky, they broke down into tears again. By 10 p.m., all three had fallen asleep. The van was low on gas, so the couple stopped at Fort McKay, where dozens of vehicles had queued. Tara waited for two hours for their turn at the pump, while Doug spent an hour in line inside to buy bottled water, juice, beef jerky, and a bag of chips. There wasn’t much left on the shelves. Then they inched back onto the highway.

They arrived at the Wapasu Creek Lodge at 4 a.m. They’d heard on the radio that, finally, there would be room for them. On any other day, the drive from the city would’ve taken about two hours. It took them twelve. Doug registered the family at the front desk, and was handed keys to three rooms, plus shampoo and soap. They’d be sharing a dormitory-style building, one of several long, narrow, white residences, with not just other evacuees, but also oil workers.

Tara and Doug didn’t sleep much that night. They’d heard a preliminary estimate of the damage in Fort McMurray neighbourhoods: only one house had burned down in Thickwood at that point, one or two blocks from their home.

The next morning, they had breakfast in the cafeteria, alongside other disheveled evacuee families. “When you walk by people, everyone has this look, a we’re alive kind of grin,” Tara says. “I don’t know how to describe it. Like a we made it, we’re okay, kind of a look.” After breakfast, Tara hand-washed some of their clothes in the bathroom sink, while the kids watched cartoons. Her daughter played with the pink stuffed bunny she carries with her everywhere.

Tara remains calm and positive, even though she has no idea whether their home is still standing, or when they’ll be able to return. It’s a marvel, she says, that the entire city—88,000 people—was evacuated so quickly, with no reported injuries. “It could have gone so wrong, so fast,” she says. “We don’t know what’s going to happen. But stuff is replaceable, you know? My family’s not.”