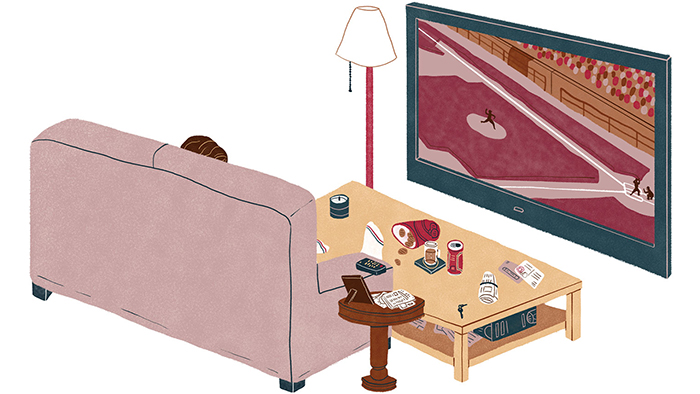 I was never much of an athlete. I used to think my problem was talent, but what I really lacked was commitment. I’d have been better at sports if I’d been willing to practise. Today, there are probably tests—like the one in which a child is asked to choose between having one marshmallow now, or two in fifteen minutes—that can identify this tendency early on. And, come to think of it, that’s what I disliked about practising: the delayed gratification. In any case, while I loved sports, I never played them well. My game of choice was hockey, this being Canada. But whether it was house league at fourteen or old-timers at forty-four, I was never more than a dilettante—not so much playing the game as pretending to.

I was better at baseball, as I discovered in the ’70s when I joined the Toronto Men’s Press League. They called it softball, but it wasn’t: the pitchers threw fastballs, curves, and changeups. Some of them—I’m thinking, in particular, of Martin Goodman, the Toronto Star’s intense editor-in-chief—were intimidating. Still, I got by. I made errors in the field, but not too many. It was the same at the plate: I struck out, but not too often. At the end of one season (Maclean’s sponsored us that year), a teammate presented me with a stats sheet showing I’d managed seven hits in twenty-one at-bats, for a .333 average. Not bad.

Still, my enthusiasm exceeded my skill—never a good thing, and, in my case, more than a little troublesome. One Saturday, our first baseman didn’t show up, and I was asked to take his place. The game was close, and in the final inning the other team had runners in scoring position. I anticipated a bunt, so I crept in toward home. Had I more experience, I would have noticed that the batter was left-handed, and if he were to swing, rather than bunt, there was a chance he’d drive the ball right at me. And sure enough, he did, breaking my nose, which still tilts slightly to one side. The guy who was playing second complains to this day that he didn’t get the recognition he deserved for catching the ball off my face, and making a double play.

I’ve spent a lot of time in emergency rooms, my injuries more numerous than serious and surprisingly multidisciplinary. It has never seemed to matter the sport. A year ago, I missed the first half of a dinner party getting stitched up after tearing my palm playing volleyball—volleyball!—on the hosts’ lawn. (They’ve decided we should stick to badminton from now on.) So this moment—the end of my career as an overzealous, underachieving athlete—has been a long time coming, and it probably explains why my interest in watching games, rather than participating in them, is at a lifetime high. Twenty-five years ago, baseball and hockey were the only sports I followed. Now, I sometimes find myself tuning in to sports I hardly knew existed. Competitive darts?

My spectating is bipolar. If I’m unallied, I’m someone who respects athletic excellence, savours the drama inherent in competition, and admires the beauty of the human form—someone who cares more about the quality of the game than who wins. But when I’m emotionally invested, as I am when I watch the Maple Leafs and Blue Jays, I’m irrational—someone who doesn’t care that the “home team” is composed almost entirely of players from elsewhere; someone desperate for victory, however achieved; someone unaccountably loyal, even when the contest ends in disappointment (as it so often does in Toronto); someone who knows he’s addicted, but is helpless to do anything about it. In other words, a hapless fan.

Skeptics would say it’s all a waste of time, and I’ll concede that baseball isn’t Shakespeare. Yet I’ll also argue that its unscripted narratives, like those of other games, are often Shakespearean. Did the Bard like sports? We don’t know, although his plays make mention of almost fifty of them. But as a student of human nature nonpareil, he would have understood that there’s much to be learned from what takes place on the playing field, where, as in any theatre of battle, men and women are revealed to each other—and to themselves.

John Macfarlane is the editor and co-publisher of The Walrus.
Jeannie Phan