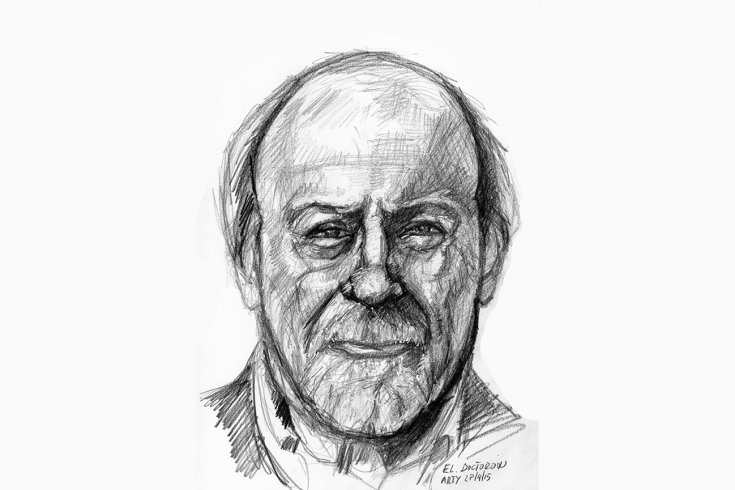 Abrilliant star in the twentieth century firmament of American letters, E. L. Doctorow, is dead, age eighty-four. Hearing the news, I recalled meeting him in the early 1990s at Montreal’s Jewish Public Library, when he was the keynote speaker for that year’s Jewish Book Month. I was tasked with introducing him. I was quite nervous, because it wasn’t mere admiration I wanted to convey. I had recently read Doctorow’s crowning masterpiece, Billy Bathgate. It was one of the great reading experiences of my life, which should have inspired me to eloquence, but instead tongue-tied me.

So I sought inspiration from another literary supernova to cover my inadequacy. I found what I was looking for in the novel, Possession, by English writer A. S. Byatt: “Now and then there are readings which make the hairs on the neck, the non-existent pelt, stand on end and tremble, when every word burns and shines hard and clear and infinite and exact, like stones of fire . . . ”

I am not the kind of reader for whom horripilation is a familiar occurrence. When it happens, the scene being described sears itself into permanent memory. Anyone who by habit or training tends to read fiction critically will understand what a rare pleasure it is when the real world falls away and the monitoring intellect is simply cauterized with the emergence of an all-engrossing fictional world that is beyond criticism or judgment.

For me, Billy Bathgate was that novel. The book reconstructs the waning years of mobster Dutch Schultz’s frantic reign of terror in Depression-era New York. Doctorow said the idea for the novel came to him with an image of men in tuxedos on a tugboat. That image turned into the scene that became my stone of fire.

The scene on the tugboat records the ritual killing of Bo Weinberg, Dutch’s hapless partner. It opens with the mobster’s apprentice, Billy, a poor Bronx boy from a dysfunctional home, impulsively jumping aboard the tugboat where the execution is to take place (“nobody told me not to”) as, leaving behind the bright lights of society and conscience, it chugs into the night. What Billy will witness is his crossing of a moral Rubicon.

Untroubled by what he sees—worse, intrigued by the craftsmanship with which the deed is executed—Billy narrates the scene with precise, unhurried detail. He describes Bo being fitted for his cement shoes. He admires the deft precision with which Irving, Dutch’s hit man, neatly rolls up Bo’s pants to keep them dry, also noting how dexterously the man binds and knots the ropes which lock Bo into his chair. Billy describes Bo’s blonde moll, shivering and whimpering in her thin evening dress. Bo rants in fury at Dutch, then as the cement sucks at his feet in the basin, he cries out in anguish, “Mama! ” (my non-existent pelt is rising at the memory) and finally begs Irving for a quick end. All this Billy recounts as though watching a pastry chef concoct a croquembouche cake.

Billy, “a boy alive in the suspension of childhood” is an American type: an orphan (real or virtual), wet behind the ears but endowed with a mind quick to grasp along which route his main chance lies. Billy exploits his gifts, such as they are, for advancement—Billy’s skill is the ability to juggle objects of uneven size and weight (Doctorow’s metaphors are never obscure)—and is dependent on a father figure for the acquisition of principles to accept or rebel against. Huckleberry Finn, Horatio Alger, Jay Gatsby, Holden Caulfield, Augie March—like Billy, these are all intensely American figures, bundles of competencies waiting for the call to action. Their (at best) morally ambiguous adventures, provoked by circumstances and an absence of cultural anchorage they can call their own, tell us a great deal about their creators’ sense of the national moment they are framing.

Some of Doctorow’s other books deal with big national issues like the obsession with communism (The Book of Daniel) and the melting pot (Ragtime). But criminality as a fellow traveller of the American dream is a recurrent motif in Doctorow’s oeuvre, and the sub-universe Doctorow recreates in which it thrives—a world I would be terrified actually to enter—the fiction that most interests me. Billy Bathgate is a safe voyage into the banality of evil, with real life’s baggage of revulsion stowed out of sight. Don’t we all want a legitimate break from the burden of moral judgment?

Billy Bathgate is about gangsterism, and therefore primarily about the flow of money illicitly gained (capitalism reversed), a perversion of the American dream, with Billy—Dutch’s “lap dog terrible”—as the anti-Horatio Alger. Always, as in the legitimate capitalistic world, it is the “flow of money” thrumming away under the surface action that is the prime mover of life. At one point Billy ruminates on his life in feudal service to Dutch:

I had counted off my time with Mr. Schultz by the killings, the gun shots and sobs and cracking skulls resounded in my memory like tolling bells, but something else had been going on all that while, which was the movement of money, it had come in and it had gone out all that time, as uninterrupted as a tide in the incoming and outgoing, as steady and unceasing as the quiet celestial system of the churning earth.

The evils proliferate and still we do not judge; instead we marvel along with Billy’s excitement at “living in the very pulsebeat of the tabloids . . .and hidden like the fox in the tree leaves on the puzzle page except that I was right in the middle of the centrally important news of our time.” He admires Dutch not for the evil in him, but for his capability: the directness and freedom from the crippling fetters of conscience with which he takes what he wants. And is that not what so many millions of American viewers found so captivating in Tony Soprano, another man whose “high audacity” might fascinate a young American boy? (Although, it isn’t Doctorow’s Dutch, a sociopath through and through, who reminds us of Tony. It is Billy, that “capable boy,” who could have been one of life’s positive contenders but who chooses evil, and from whom we have not recoiled—on the contrary, we want him to “succeed”—who should trouble our conscience, but doesn’t.)

“The fox in the tree leaves.” That is a good description of Doctorow himself. When you think of the novels by Twain, Fitzgerald, Hemingway, Bellow, Updike, Salinger, and Roth, you conjure up settings, characters, and cultures these writers knew intimately. Their protagonists are thinly disguised alter egos, whose adventures spring directly from passages and events in their creators’ lives.

But Doctorow’s characters are diverse and completely unrelated in their origins and character to himself. Doctorow did not grow up in the slums like Billy. He never consorted with gangsters. His was a bookish childhood in his parents’ Bronx apartment, “in a family where people read constantly, where reading was essential to a normal day’s life,” as he described it. And after that it was a bookish life in universities and the publishing world.

Indeed, had Doctorow been a typical academic writer of his time and place, he would have churned out postmodern fiction full of self-reflexive, open-ended, mirror-game exercises with slow-moving or negligible plots, fiction that was insensitive to the traditional values of coherence and closure. Instead, he chose real stories with characters from the real world, beautifully plotted in a way calculated to arouse his readers’ curiosity and awareness regarding their own culture. Which is what I value most in literature, and why I rank Doctorow so high in my personal pantheon of great writers. I wonder if many of his readers have ever considered what an extraordinary achievement it is to be, as a fictionalist, a fox amongst the tree leaves.