A Land without Trump | The Walrus
Skip to content 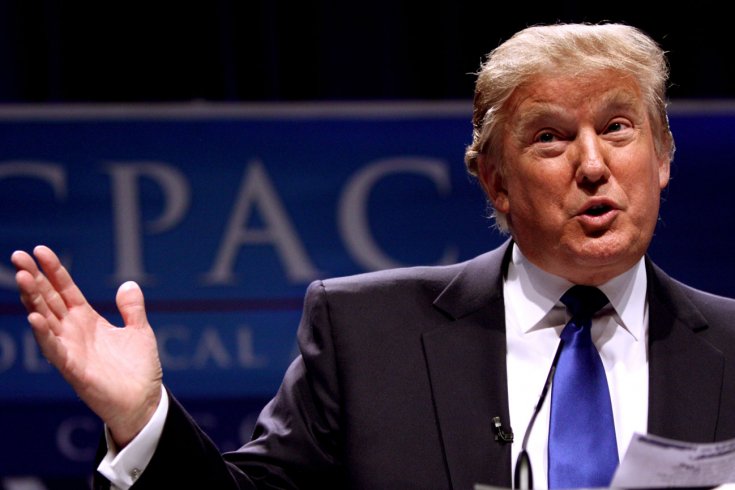 When John F. Kennedy, Jr. co-founded George twenty summers ago, the inaugural cover featured Cindy Crawford done up as a sexy George Washington. The image symbolized the magazine’s then-novel theme: the cultural continuum between politics and entertainment. “I think that when JFK Jr. first observed President Clinton on national TV playing sax or revealing his underwear choice, he was onto something,” media critic David Carr told CNN when George ceased publishing in 2001. Celebrity and politics were merging.

Since then, the trend has continued, in large part thanks to the popularity of cable news channels, which long ago learned to boost ratings by presenting politics as rollerball for retirees. When I visit my in-laws in Del Boca Vista, the TV usually is tuned to MSNBC—not so they can learn actual news, which they get early in the morning from the New York Times, but so they can laugh when Rachel Maddow skewers some Republican congressman who thinks Earth is 6,000 years old.

This month brought another landmark in the merger between politics and celebrity gossip, with the Huffington Post announcing that news about GOP presidential candidate Donald Trump will henceforth appear on its “entertainment” sub-site. “Our reason is simple,” wrote HuffPo’s editorial director and Washington bureau chief. “Trump’s campaign is a sideshow. We won’t take the bait. If you are interested in what The Donald has to say, you’ll find it next to our stories on the Kardashians and The Bachelorette.”

It’s a defensible move: Many of Trump’s pronouncements are so bizarre that they truly do lie outside the world of rational political discourse. For the same reason, I applaud the Glenn Beck Program (not usually the voice of reason in the US news media) for banning any mention of Trump. (“I’m sick of it, so we’re moving on,” said a host. “I just can’t do another show about it.”)

But once you go down this road, where does it end? Last week, Rand Paul—a supposedly “serious” contender for president, and a Republican senator to boot—released a video in which he sets fire to a copy of the US tax code, then puts another copy into a wood chipper, and then finishes off a third with a chainsaw. (If a high school student were caught doing this, we’d send him to the school psychiatrist.) Earlier this year, Republican senator James Inhofe, who considers himself to be an expert on the “hoax” of global warming, brought a snowball to the Senate floor and threw it at a page—to prove, uh, something. In April, GOP presidential candidate Mike Huckabee led a bunch of journalists around an NRA “Leadership Forum” so they could watch him fondle guns, one of which he bought as a birthday present for his wife. (Mrs. Huckabee already owns plenty of firearms, her husband reassured reporters, but “some of the models we have are a little bulky for concealed carry.”) And last weekend, Huckabee topped that by accusing Barack Obama of using the Iran deal to set the table for a second holocaust. (“He will take the Israelis and march them to the door of the oven.”) If one were to prune away all of these surreal stunts from American political coverage, on many days all you’d be left with are congressional sub-committee hearings.

For all the talk we’ve heard in recent years about Canada’s slide into supposedly “American-style” gutter politics, the sort of garish gestures described above are completely unknown north of the border. The Canadian version of a controversial “stunt” involves Stephen Harper sitting down at a piano and playing a pop song. And when Elizabeth May embarrassed herself with her Welcome Back Kotter shtick, most observers responded to this brief spasm of theatricality with stunned mortification and pity.

I suppose the closest thing that the federal Tories have to a controversial populist is Minister of Employment and Social Development Pierre Poilievre, who shocked the Canadian pundit class by, wait for it, conducting a ministerial press conference wearing a golf shirt emblazoned with the Conservative Party logo. His party is so obsessed with milking partisan advantage from their expanded Universal Child Care Benefit that Poilievre actually travelled to a Winnipeg production facility so he could pose for pictures with the freshly printed cheques. The stunt was fantastically grubby. But the least that can be said for it was that the UCCB is an actual component of government policy. Better a printing press, I suppose, than a snowball, a chainsaw, a flame-thrower, or a gun.

As Canadians, we’d like to think that Donald Trumps don’t infect our politics because we are smarter and saner than Americans. But the real reason is structural. Republicans and Democrats elect their presidential candidates through the grass roots, which means that populists do occasionally hijack the process. In our parliamentary system, on the other hand, the major parties are heavily whipped entities obsessed with brand preservation. And the party leaders who go on to become premier or prime minister are selected at convention proceedings closely supervised by risk-averse party grandees. The result is a menagerie of bland, polished, disciplined wonks and career politicians such as Stephen Harper, Christy Clark, Rachel Notley, and Kathleen Wynne. (It’s no coincidence that the most interesting and thoroughly disgraced politician in modern Canadian history, former Toronto mayor Rob Ford, existed completely outside the party system.)

Most Republicans are appalled by Donald Trump, and rightly so: His comments about Mexico’s supposed criminal hordes only encourage the GOP’s reputation as a party for ageing white nativists. But his fifteen minutes of fame highlight the degree to which Americans trust ordinary yahoos to pick the person to run their country. It’s a right that our own yahoos will never ever have.