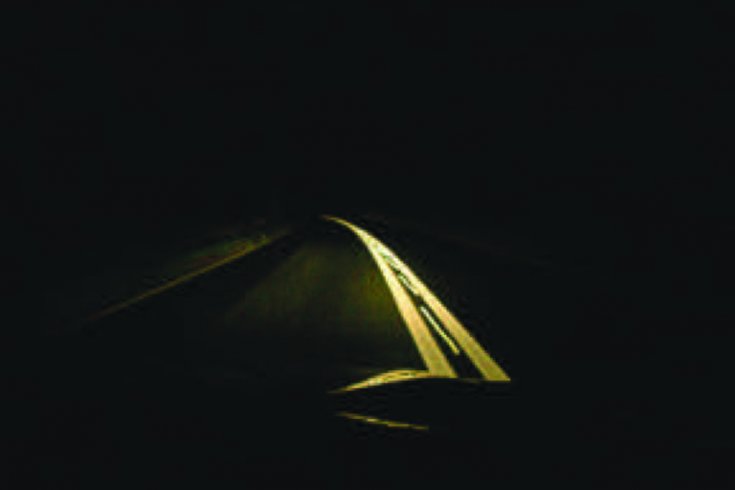 New Orleans, 2004—The heat of the day has given way to an inky, balmy Louisiana night, our car windows rolled down as we speed, tires humming on pavement, along Bienville Street. Amanda accelerates through the yellow light at Carollton, me bitching. “See,” I say, almost gloating as she brakes hard on the quiet, dark road for a man in the middle of it in front of us. “You keep speeding and cops’ll get us.”

The man in the street, black against the black asphalt and wearing a white T-shirt, looks up, looks into our headlights. He’s struggling, right there in our lane, with something below him. Dropped groceries A sack of something large. Not another car or person in sight, just Amanda and me and this man ahead. We stop in front of him. He’s not a man at all but a teen, his eyes wide open, caught in some embarrassing act, staring into our lights. It’s not dropped groceries he’s struggling with, we see, but another young man sitting down in the road.

We are close enough to see blood on the sitter’s blue shirt. The young one on top drags his charge out of our way to the curb. Amanda pulls up beside the two, and I’m going to ask them if they’re all right, if they need some help. The kid on the ground must be drunk. He’s fallen on the road, head lolling, and his friend is helping him get out of our way, keeping him safe from the white, too-fast drivers.

What happens next, it happens in seconds. But to this day it plays out in my head like a lifetime. My arm hangs out the window, close enough to reach and touch them. I am about to open my mouth when I see that the standing teen has a pistol in his hand. He looks at me, eyes cold now, and begins to raise the gun toward us. I shout to Amanda, “He’s got a gun! Drivedrivedrive!” In the very instant she peels away, I see the kid change his mind, lower the gun. He points it at the head of the one below him and pulls the trigger. I watch the barrel flash, hear the gun pop. Doesn’t sound loud at all. He turns then and runs, fast as he can, down a side street.

Not half a block away, I scream, “Stopstopstop!” Amanda doesn’t want to. I scream again. She does. “I saw which way he went,” I shout, opening the door and bolting. “No!” Amanda panics. I go, running, then stopping, worried about the return of the shooter. I barely hear Amanda yelling into the row of dark houses, “Call 911! Call 911!” I stare down the side street, look to see if the shooter will come back. Will kill me. I run to the man on the ground. He looks so small. He lies on his side, fetal position, eyes staring at the dirty blacktop. He panics when I approach. He whines like a baby with a stomach ache, begins to hyperventilate when I kneel. “I’m not him,” I whisper. “It’s OK.”

I stroke his hair, and he calms. His whine becomes a moan. He stares out at the road, waiting. I sit down and put his head on my lap. I stroke his head like he’s my child. “It’s OK. You’re going to be OK.” I hum to cover his moan, to relax him. He’s bleeding out, I see, his blue shirt soaked black in the streetlight, blood running out of him and puddling by the curb. He’s shot in the chest. I consider mouth-to-mouth, but only for a second. He’s dying, and there’s nothing anyone can do about it. Only then do I see the bullet hole, neat and round, in his cheek. I stroke his head and whisper, “You’re OK. You’re going to be OK. Just breathe.” I think he takes some solace in my words. The panic has turned to resolve. To calm. I hum some more, continue stroking his head. His short black hair is wiry, greasy. He’s as thin as my son, who will be fourteen next month. But this one on the ground, bleeding on me, he’s clearly a few years older. His breathing slows. “You’re going to be OK. Just breathe,” I whisper, I hum, as his eyes glass over and he dies in my lap.

toronto, 1990—We’re stuck in rush-hour traffic at 8:30 a.m. on Sheppard Avenue in North York. She turned nineteen last month. I am twenty-three, won’t meet Amanda yet for another two years.

We are in the back seat of a Buick Skylark. She’s sprawled on the seat, naked. I crouch awkwardly between her spread legs. She’s screaming. Her mother, whose driving, screams as well. I look up for a moment, out the window, and see the shocked expression of a woman staring back at me from another car.

Our car inches forward, horn blaring, and I look back down. Blood. Lots of it on the seat. That will never come out, I think. Upholstery is ruined. White noise in my head like a TV thats set to a blank station at full volume. I’m sure this girl is dying. She screams more. A blood-smeared round lump pushes out from her body. The head of my child. She yelps, and the lump pushes out further.

My eyes watch all of this unfold, my brain numb with horror. But my hands, they are calm and steady. The hands of my long-dead surgeon father. The blood-smeared mass spits out fast from her body, and my hands catch it and stop it from slipping onto the floor.

The little thing is long and skinny. Its blue in the harsh morning light. The umbilical cord is wrapped tightly about its neck. It doesn’t move, doesn’t cry, doesn’t breathe. I see all of this, am shocked to blankness to see all of this. But the hands, they work steadily, unwinding the umbilical cord. The body is slippery. Don’t drop it.

Now it begins to gasp a little, but something still prevents it from drawing breath. The pointer finger of my left hand prods the tiny mouth open, scoops out bile and goo. The hands turn the baby onto its stomach. While the right hand cradles it, the left hand gives a quick slap to the tiny rump. The baby gasps, begins to draw in more breath, bleats like a lamb. The bleats turn into wails. The blue skin begins to turn pink.

I watch as one hand gently wipes some blood from the child. The other hand makes a nest of the mothers robe on her puffed stomach. Both hands lay the baby gently in the robe to keep it warm. The baby screams full-fledged now, its lungs clear and obviously strong. Its mother lies back with eyes closed, breathing easier, passed out. The new grandmother honks her way through traffic and speeds into the emergency-room entrance of North York General. I haven’t even noticed if my child is a boy or a girl.

We settle, two days later, on the name Jacob. Despite the protests of family on both sides, I decide that his middle name will be Buick. I like to drive him through the dark streets of my neighbourhood at night. He is loud, healthy, and only calms each evening to the hum of car tires on pavement.