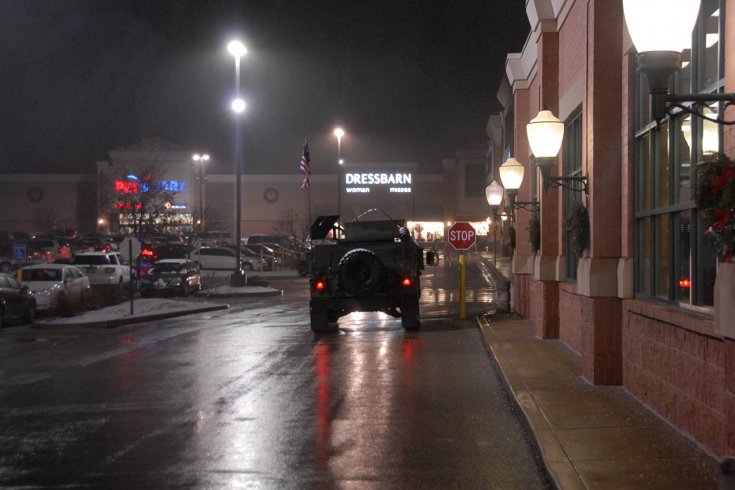 A military vehicle rolls through a plaza in Sappington, Missouri, about thirty kilometres south of Ferguson.

The voice comes from the driver’s seat of a dark SUV in a shopping plaza in Sappington, a satellite community of about 8,000 residents located thirty kilometres south of downtown Ferguson, Missouri. Tim and Betsy, locals who have just purchased a kitten from the plaza’s pet shop, saw me photographing a boarded-up shoe store and have stopped to chat.

“They just boarded up probably to be cautious,” Tim says. He and Betsy live about ten kilometres from Ferguson; Tim says they heard gunfire during Monday night’s protests and riots, after a grand jury announced its decision not to indict police officer Darren Wilson, who shot and killed eighteen-year-old Michael Brown in August.

Tim has sympathy for Sappington’s store keepers. Even this far from Ferguson, he believes, they have every reason to fear property destruction. “The verdict didn’t come to what [some people] wanted. They’re trying to force a change, and that’s not how it works,” he says, speaking of those who have been disappointed and angered by the non-indictment.

“Fifty people can peacefully protest, and it takes one ignorant person to cause chaos,” he continues, as Betsy quietly nods along. As for Wilson’s decision to shoot Brown multiple times, Tim believes the officer acted appropriately: “I think the man did his job; he did everything he was supposed to do.”

People here are doing some last-minute shopping on this Wednesday evening, one day before the United States’ Thanksgiving holiday. In the same plaza, a home décor shop bears the sign: “Store closed due to the safety of our associates and customers.” I ask a police officer parked nearby if she will talk about safety. “Sorry, I can’t,” she replies.

The unrest in Ferguson is on the minds and lips of many in the area. On South Lindbergh Blvd., four black women seated in the 54th Street Grill & Bar chat about the grand jury decision, and crane their necks to see a breaking news report on a television across the room. It says Ferguson police have no plans to ask for Wilson’s resignation.

Joan Scaife, who lives in Mississippi but is originally from the St. Louis area, says she is opposed to the looting that has occurred in and around Ferguson. “The businesses have nothing to do with what happened,” she tells me, before adding that she is disappointed with the decision not to indict Wilson. “I think he really should have had his day in court.”

Linda Anderson says that road closures caused by the protests are inconvenient but acceptable. “I don’t want to go way out in the county to go to Walmart,” she says, “but I understand what happened to them. We all feel like we haven’t had a voice.”

Maya Greco, who looks to be the youngest of the group, is most critical of the official response to Brown’s shooting. “I think they completely victimized Michael Brown,” she says.

Greco also takes issue with some of the groups formed in support of Wilson—during a crowdfunding effort launched in August in Wilson’s name, dozens of donors included hateful, racist messages against Brown, and black people in general.

Here in Sappington, it is clear to me that black residents, like the women in the restaurant, are more eager to discuss presumed injustices in policing and the judicial system, while white residents like Tim are more disposed to talking about looting and property destruction.

At the restaurant bar, patrons and staff watch a CNN report on the death of Tamir Rice, a twelve-year-old black boy who was shot and killed by police in Cleveland last weekend. A video of the encounter has just been released; it appears to show police opening fire on Rice almost immediately upon arriving at the scene. The restaurant viewers—nearly all of them black—moan and shake their heads.

Not all blacks are willing to directly tie Brown’s death to a larger narrative of racialized police brutality. Cab driver Paul Davis, a sixty-four-year-old veteran of the Vietnam War, says race was, at best, one of many factors in the incident. “It’s not so much a race thing—the problem we have in this country is guns, because it’s guns that kill people,” says Davis. He tells me that while he can understand police officers having rifles in their cars, he would prefer if they didn’t carry weapons on their bodies.

Still, though, the cabbie casts serious doubt on Wilson’s description of his confrontation with Brown—excerpts of a feature interview that the officer had given that morning have already been broadcast on every local TV and radio station. “They was asking him, what was the thoughts on your mind? And I was saying, I can tell you what was in that punk motherfucker’s mind: Ain’t no nigger gonna hit me in the face and get away with it,” Davis says.

On the surface, life in the greater St. Louis area seems to be carrying on as normal. Even the running protest outside the Ferguson police station has turned relatively low key. But it is easy to imagine passionate conversations among family and friends around the Thanksgiving table—talks involving guns, policing, and racism, about a death that has captured global attention.