Down the Rabbit Hole | The Walrus
Skip to content 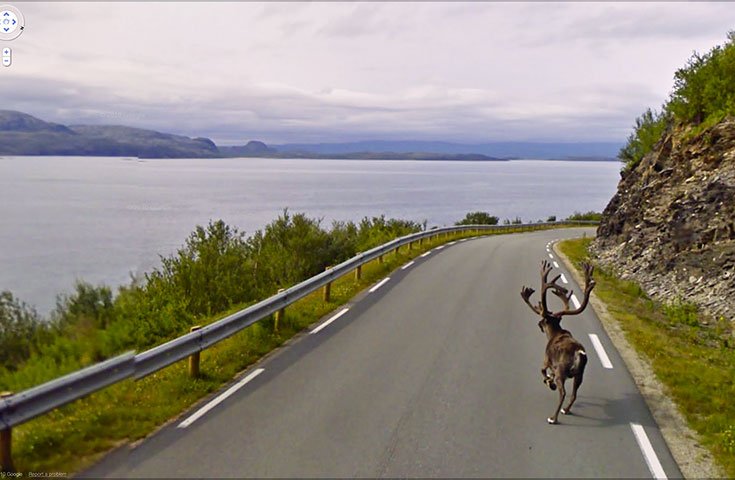 Googlie-eyed Artist Jon Rafman brings meaning to the chaos of the Internet.

Ifirst saw his work hanging in a gallery, but it’s through a monitor that I truly came to know the art of Jon Rafman, an outré treasure hunter who journeys into the yawning crevasses of cyberspace to document the zeitgeist. Over the past five years or so, he has become such a singular presence online that, like the Internet’s own Kevin Bacon, you’re never more than six clicks away from his handiwork. And, increasingly, the multidisciplinary artist is blurring the line between the virtual and the physical.

Nothing demonstrates this quite like a visit to Rafman’s Montreal studio, on the third floor of an unassuming Mile End low-rise. When I arrived in May, I found him and an assistant trying to draw on a taxidermal pit bull with Crayola markers. Will Gaucher, the assistant, admitted that he’d never sketched on anything furry before, but Rafman assured me that Gaucher is a master of materials, a Crayolist by trade.

Working from a giant iMac, Gaucher spent the better part of an hour marking up the sturdy male dog, tracing over his ribs and circling his eye. The canine sculpture riffs on a viral pic of a two- or three-year-old boy intently tattooing a prostrate bull terrier, which has circulated on list articles and those joke email chains that my mom always forwards to me. The piece plays with an irony typical of Internet culture: It’s a lighthearted if impish punchline, the kind of thing you giggle at and mindlessly scroll past. But under the surface, there’s the more sinister and disturbing reality of the desecrated body—that poor dog. “What other colours should we do? ” Gaucher asked Rafman. “Pink? ”

Rafman, who turns thirty-three this month, illuminates the dark, sometimes icky edges of digital culture. An only child, he grew up transfixed by video games and other screen-mediated environments; he remained transfixed while studying literature and philosophy at McGill and earning an MFA at the School of the Art Institute of Chicago. He looks not unlike Joaquin Phoenix in Spike Jonze’s Her—the coiffed hair, the same glasses, and a sartorial style that seems to come from a near-future five to ten years down the line. His moustache, unlike that of Phoenix’s character, is more cavalier, more Errol Flynn.

For his most well-known project, a series called The Nine Eyes of Google Street View, Rafman has spent the past six years hunting down anomalies captured by those Google Street View cars, including a house fire in Atlanta and a reindeer on Norway’s Riksvei 888 highway. He has also led guided tours of the virtual world Second Life via his avatar, the big red Kool-Aid Man.

Though his early blog work earned him praise as a discerning curator of digital curios, his art now extends well beyond the web. He has enjoyed solo exhibitions at the Saatchi Gallery in London and the Contemporary Art Museum St. Louis in 2012 and 2014, respectively. This year, he was also long-listed for the Sobey Art Award, the largest purse for young Canadian artists; and landed on the short list for the Future Generation Art Prize, an international honour for innovators younger than thirty-five, which entails a group exhibition to coincide with the 2015 Venice Biennale. His work is found everywhere from the Montreal Museum of Fine Arts and the Museum of Contemporary Art of Rome, to OmniCorp’s fictional corporate offices in the new RoboCop remake.

Recently, Rafman began exploring the iconography of colourful, often confounding fetish communities—communities that coalesce courtesy of the web’s inherent connectivity. By turning that immaterial visual culture (think virtual bondage gear, fur suits, and silicone toys) into sculpture, he brings some of the most vivid and most closeted parts of the Internet to life.

Entering his busy studio, I was struck by the apparent disorder: Flat-screen TVs littered the floor, like the canvases and stretchers that pile up in a more conventional workroom. A broadsword stood in one corner, while hospital beds filled another. But just as Rafman gives meaning to the chaos of the Internet, so too does he litter his workspace deliberately. On virtually every surface—on an industrial rack lining the front wall, on benches bisecting the room—he exhibits objets de vertu: throwing stars, butt plugs, cold-compress masks, $200 in Canadian Tire money. And on a table near the back, lying in a queenly pose, there’s another stuffed pooch—a pretty lapdog that looks like a sheltie crossed with a terrier, which Team Rafman affectionately calls Little Bitch.

“What will we do with Little Bitch? ” was a frequent refrain as five young assistants bubble-wrapped, boxed, and labelled artwork. Studio manager Jennifer Chaput juggled the logistics: some pieces were headed to Toronto for the Power Plant’s annual Power Ball, an haut monde fundraiser, and for a last-minute solo show across town; others were on their way to Switzerland for Art Basel, the premier international art fair for everything modern and contemporary. All the while, Rafman buzzed around, directing, making a stroke here, pruning a piece there, and generally keeping his art factory producing icons as prolific and varied as the anarchic message boards that inspire him. But because he had recently got some silicone in his eye (a hazard of working with new materials, he explained), he mostly served as ringmaster for the whole circus with an ice pack held against the infection.

As his artwork might suggest, Rafman is something of a joker. At one point, he ducked away and returned with an Ostrich pillow—one of those massive beanbags you wear over your head like a mask, so you can sleep face down on a table. “Every day, at around this time, I take a power nap,” he said. Because it was 6:45 p.m., because of the breakneck rhythm of the day, because of all the bizarre things going on around me, I was inclined to believe him.

He settled into the pillow at his tidy white computer desk, and everyone left him alone. After two minutes, he was up.

“Nah, I’m kidding,” Rafman said. “I thought I could use it for a sculpture.”

Twenty minutes later, he cut across the room holding a pair of geeked-up glasses with an LED bar attached, like a low-tech Google Glass. “François, it’s time for your sun therapy,” he said, handing them to assistant François Pisapia, who had straddled a dummy for most of the afternoon, wrapping it in duct tape to mimic a DIY Bugs Bunny. Pisapia said the specs brightened his mood immediately.

Rafman and his team weren’t just yanking my chain: clearly, they were trolling me—an indispensable quirk, keenly observed, in their Internet-come-to-life schema. Rafman knows his studio—his entire oeuvre, really—appears unusual to outsiders. He has fun with it, challenging viewers, inviting them down the rabbit hole.

Out of his recent turn to sculpture, the most striking pieces are the “troll caves”—riffs on the physical spaces gamers fashion to maximize their time in simulated worlds. For one such cave, Rig, an adjustable bed is reinforced with steel-tube framing, from which a flat screen floats while a repurposed industrial arm allows a keyboard to swing comfortably into place. For Cockpit, Rafman squashes a computer into an office cabinet and invites viewers to climb in and watch Mainsqueeze, his seven-minute video that weaves together outlandish fetish clips from across the web.

For Rafman, the troll caves, abject as they appear, are poetic spaces, covered with the sticky residue of human existence, even as they obfuscate the physical body and attempt to eternalize the virtual. They represent our modern condition, wherein social engagement can be abstract and stunted, wherein some retreat digitally.

I got ready to leave Rafman’s hyper-connected, cyber-obsessed Xanadu, but a question still hung in the air: “What will we do with Little Bitch? ” Someone suggested they smear her with Vaseline. Rafman said, “I think we’re gonna shave her.”

Rafman is as timely and irreverent as they come—a flâneur of digital boulevards. If Marcel Duchamp were alive today and surfing online bulletin boards like 4chan, his work might well resemble Rafman’s. He sees things, beyond the graffitied pup or spooked reindeer, that most of us are not yet equipped to read. For him, what we produce and consume on the web are rich texts that tell stories about the humours, romances, and maladies of the day. And he’s determined to preserve at least the spirit of those stories. It’s our job to decrypt them.