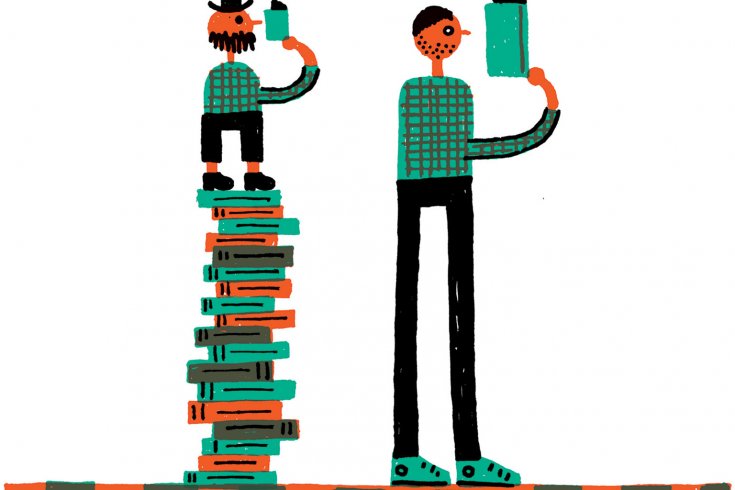 There is something enthralling about the short story. Maybe it’s the sleight of hand—so much scope and breadth and emotion in so few pages. In fact, about the only thing you can say definitively about the short story is that it’s short. Reading one is the literary equivalent of stepping off a diving board and plunging into thin air. In that brief moment, everything can somersault. You can experience a wild, heady ride that can change you.

Traditionally, the Canadian short story is staunchly based in realism, with a narrative arc that ratchets up through conflicts and semi-resolutions toward a crisis, an epiphany, and a tidy conclusion. The shape is almost hard-wired in our collective brains.

But a new crop is working against these constraints, with wider plots that spread into the lives of characters who may be only tangentially linked to one another. They spread out over time, too, rather than adhere to the traditional shape of action, epiphany, denouement.

Enter Russell Smith’s mesmeric, sensuous collection Confidence. His protagonists are mostly white Torontonian men, and they are taken up with their own bodies, emotions, and interior thoughts. In particular, they are obsessed with sex—with whom to have it, how much it costs, and the moral compromises required to keep it coming. These men are at ease with the vernacular of gentrification, with the syntax of haute couture and fine cuisine.

In each of the eight stories, the protagonist has a tenuous grip on the upper-middle rungs of society, has a job that requires a liberal education, and is afflicted with a low-thrumming anxiety about money.

Tracy and the other protagonists are united by middle age and disillusionment, having given up their individual freedoms for unfulfilling domestic stability. Through third-person limited narrators and a confection of keen-eyed observations that zip off the tongue like fizz candy, we understand their thoughts and feelings, lusts and desires—and the excuses the men invent when they behave badly. The narrative tension works like a spiderweb, delicately constructed and ensnaring: Smith’s prose captures moral decay.

Of course, all the women are subjected to the male gaze—that hackneyed but disturbingly apt term. They are cleavage, hips, and thighs; they are sweaty black polyester thongs. The male protagonists find them sexy in their poverty or sexy in their vulnerability. In “Fun Girls,” one of the “fun” women raves about an expensive restaurant: “And it was so free! Was it not free? ” She is oblivious to the fact that someone else has picked up the tab. Even the powerful women—solvent and self-aware—are nothing but sex objects tricked out with expensive Italian boots or wives with ticking biological clocks. Yet, somehow, they always hold the moral upper hand.

Smith leaves wiggle room between his characters’ perceptions and his own overriding judgment. He deftly allows us to discern grubbing desires, and, in doing so, our own prejudices. Epiphanies tend to fly past the characters themselves, but they hit us head-on.

The stakes are higher for Heather O’Neill’s characters—the urban poor who have more to lose than Smith’s moneyed men. O’Neill has a knack for capturing cities and the details of class, and in Daydreams of Angels she explores the power imbalances between children and adults, between the innocent and the corrupt, and between the rich and the poor.

The collection’s twenty stories are postmodern fairy tales, complete with a performing bear that speaks and a boy raised by wolves. There are single mothers, quadruplets, modern prophets, and babies born of the sea. There are also orphans who face harsh adult realities. These are kids who battle errant, unpredictable punishments of all sorts. As with that Canadian orphan prototype, Lucy Maud Montgomery’s Anne Shirley, they use their imaginations to overcome cruelty. But O’Neill’s orphans live in cities, not the idyllic fields of Prince Edward Island. They deal with addicts, fascists, sexual assault, and eviction. The only way they are similar to Anne is that they are emboldened, alive with agency and imagination.

Disney movies have warped our view of fairy tales, making them whimsical and sweet. These stories resemble the more nightmarish tales of the Brothers Grimm. They are declarative articulations of hardship, leavened with wit and compassion. Daydreams of Angels contrasts innocence and man-made cruelties; it is rich in metaphor and awash in magic, and it sparkles with idiosyncratic one-liners.

The book’s heroes aren’t beribboned by helpful bluebirds, and they certainly don’t ride off into sunsets with handsome princes. In “The Story of a Rose Bush,” for example, a Nazi john gives leather gloves to a child prostitute, who ends up shamed and shorn on the streets of Paris. Although she is rescued by a Canadian soldier and taken to Montreal, she ends up paralyzed by a bypass surgery gone wrong. As an older woman, she rides a wheelchair through the streets, filled with nostalgia for a same-sex affair (the only real love she ever experienced) that ended in devastating betrayal.

O’Neill upends preconceived notions about childhood and poverty—and form. She plays with the traditional fairy tale to reveal the dangerous, often grotesque underbelly of desperate times.

Irina Kovalyova’s debut collection, Specimen, is also preoccupied with experimental form. Born in the Soviet Union, Kovalyova was, for a time, stateless (due to shifting political boundaries). She later interned at NASA and worked as a DNA analyst in New York before settling in British Columbia, where she earned a master’s degree in creative writing and now teaches molecular biology. In other words, she is no slouch.

Specimen is enriched with the author’s scholarship, but its nine stories also pack an emotional punch. Kovalyova welds gentle humour and bald wonder to explore the scientific underpinnings of the universe, including all kinds of love and despair.

“Peptide p” documents how young people experience grief, in the form of a scientific report complete with the apt subtitle, “The Association of Parapsychological Phenomena with Resistance to Heart Break Disease in Peptide p-Positive Children.” Graphs and interviews that assess paranormal activity fill the pages, which focus on biochemical fluctuations in kids who have suffered trauma. Ironically, the story uses scientific language to prove the existence of the unreal.

Specimen concludes with “The Blood Keeper,” a tour de force. Full of wildly propulsive action, it borrows from the pulp spy novel and is pinned down by complex insights about science, totalitarianism, betrayal, trust, and soporific plant extracts.

The narrator, Vera, is a botany student in Moscow who is writing a dissertation about tropical plants. When her father, who oversees Lenin’s tomb, is called to Pyongyang shortly after the death of Kim Il Sung, she joins him. What follows is a flurry of doublespeak, sinister flirtations, and secret codes.

Kovalyova creates a labyrinthine plot that constricts until it becomes necessary for her protagonist to seek escape. As in Daydreams of Angels, there are touches of magic here; the realism warps to give a view of motherhood, romantic love, and the desire for freedom. Specimen touches down in Canada, but its scope is global.

If O’Neill and Kovalyova are postmodern in their approach to the short story, Guy Vanderhaeghe is more traditional. Nevertheless, he presses the form to say new things about class, gentrification, and escape. Daddy Lenin and Other Stories returns to some of the themes the author explored in Man Descending, which won a Governor General’s Award in 1983.

Many of Vanderhaeghe’s characters have escaped threatening rural pasts or overpowering early loves to achieve modest financial security, obtained primarily through willpower and brawn. Using sturdy, unadorned sentences, Vanderhaeghe fashions hapless, hard-working narrators who have travelled far (socially and geographically) to escape claustrophobic realities. Still, they end up dissatisfied, not far enough away from what formed them.

Vanderhaeghe’s female characters are particularly vivid. We understand them through simple, indelible details: the green, caked-on eyeshadow worn by fifteen-year-old Darcy in “1957 Chevy Bel Air,” for example, is the exact shade of her irises. She is fickle and breaks the protagonist’s heart when she leaves him for an older guy with a newer car. Like many of the other women in the collection, Darcy is a siren who befuddles and abandons men. She is passionate, selfish, ungovernable. And she leaps off the page.

“The Jimi Hendrix Experience” is a particularly captivating story of a boy’s desire to escape a hot, tedious summer and follow his sole ambition—to be the famous musician. “I want a burst of Afro ablaze in a bank of stage lights,” Troy says, “to own a corona of genius.”

Along with two friends, he plays a prank on an elderly man and finds himself trapped in an explosive situation. The tension builds to a pyrotechnical epiphany: “And here I am, running through the late-afternoon stillness of an empty suburban street, sucked down it faster than my legs can carry me, this hollow, throaty roar of fire in my head, that tiny point on the horizon drawing me to where the sun is either coming up or going down.”

Vanderhaeghe’s men are worlds apart from Smith’s coke-snorting partiers, who stay out all night snacking on crab balls. They are silent and defeated, and disappear into clock-punching jobs that systematically destroy their bodies and souls. But both writers capture the vagaries of class, as well as uneasy, complicated relationships with women who are at once wise and unattainable. Their books help define an uncomfortable twenty-first-century masculinity.

Read together, these four collections exhibit the current preoccupations of the Canadian short story. They are compressed but expansive and concerned with escape of all kinds. They rise and fall and ripple as the reader dives in.

Lisa Moore published Flannery, a novel for young adults, in May.
Benoit Tardif