Could a Standing Rock Protest Happen in British Columbia? | The Walrus
Skip to content 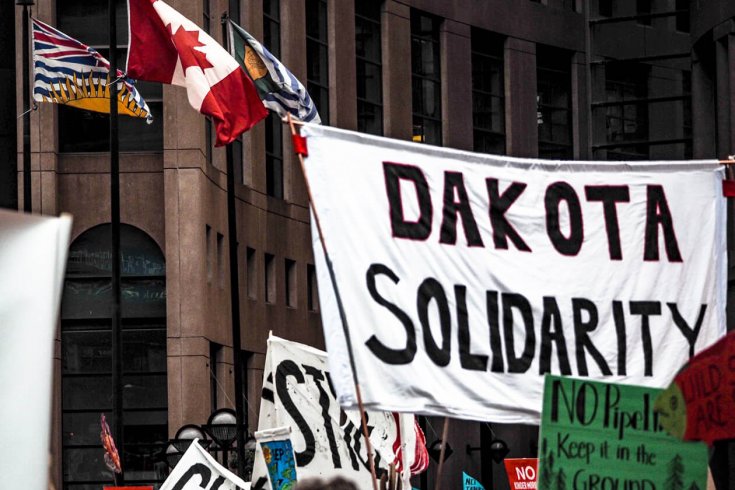 Anti-pipeline protest in Vancouver on November 19, 2016. Photograph by Kent Lins

After Justin Trudeau approved the Trans Mountain pipeline last week, the speculation was rife: could Kinder Morgan’s 1,150-kilometre pipeline expansion connecting Edmonton to tidewater at Burnaby, BC, be the next big flashpoint for First Nations-led direct action? Could the province’s Lower Mainland become host to something comparable to Standing Rock?

A number of events following Trudeau’s announcement fed the speculation. On December 1, at a meeting of business leaders in Edmonton, federal Minister of Natural Resources Jim Carr issued a warning to would-be Trans Mountain protesters: “If people choose for their own reasons not to be peaceful, then the government of Canada, through its defence forces, through its police forces, will ensure that people will be kept safe.” He was forced to backtrack and apologize in the days that followed.

The mention of “defence forces” conjured images of the seventy-eight-day standoff in Oka, Quebec, in 1990, when Mohawk protesters manned barricades facing down police and the military in a conflict sparked by a land dispute. One Quebec police officer was shot and killed.

If your consultation has failed so utterly that you have to send in water cannons to hose people down in sub-zero temperatures, that’s a complete failure on the part of the government.

It was the leader from that very community, Serge Simon, grand chief of the Mohawk Council of Kanesatake, who took to the CBC on December 6 calling for Carr’s resignation. At the same time he warned that the Treaty Alliance Against Tar Sands Expansion (a group of 120 First Nations that Simon co-founded, which includes the Standing Rock Sioux in North and South Dakota) would back direct action by “the grass roots” against pipelines like Kinder Morgan.

“The lessons have not been learned [from Oka], if you listen to Mr. Carr last week . . .” he told CBC Radio’s The Current. “We look at the correlation with Standing Rock, and is it possible that this could happen here? You’re absolutely right it can.”

The standoff at Standing Rock was sparked by the April 2016 approval of the Dakota Access Pipeline, designed to carry crude oil from the Bakken oil fields in North Dakota to a refinery in Illinois. In the process, it would need to be drilled beneath the Missouri River, which is the drinking water source for millions, including the Standing Rock Sioux, whose reservation is close to the point where the underground crossing would occur.

Initially, approximately 200 Indigenous protesters gathered on horseback at Cannonball to oppose the announcement of the pipeline approval. An emergency injunction filed by the Standing Rock Sioux in late July failed to stop the project, and by August, the largest gathering of US tribal groups in a century had convened, attracting First Nations from across the US and Canada. On October 27, 127 protestors were arrested, as police deployed in armoured vehicles reportedly used stun guns, rubber bullets, and beanbag rounds against the protesters. But on December 4, the Army Corps of Engineers announced they would not grant the permits needed for the pipeline to drill underneath the river. As victories stand, it’s likely a temporary one: President-elect Trump is not only on record as a supporter of the pipeline, he is reportedly an investor in Energy Transfer Partners, the company behind the project.

The effectiveness of Standing Rock to this point, beyond the impact of persistence and non-violent tactics employed there, was that it was a First Nations-led protest that came to be embraced by many sympathetic outside groups—including a large contingent of American veterans who in the latter days of standoff, flocked to the site to act as “human shields” against the police.

Judith Sayers, former elected chief of Vancouver Island’s Hupacsath First Nation and an assistant professor of law and business at the University of Victoria, says it’s possible that British Columbia will see similar protest movements over Kinder Morgan. “I think people feel empowered by Standing rock and the kind of support that people got there,” she says. “There are so many people with very strong feelings about this, I think when they get to the point of starting Trans Mountain construction, that’s when you’re going to get the Standing Rock kind of situation.”

She says that First Nations in BC have immense potential for direct action: all the main highways, railways, and waterways run through their territories—and in BC, where virtually no treaties were ever signed, much of this land remains unceded. The sticky question, says Sayers, is at what point do you take direct action? For many First Nations attempting to kick-start and run businesses, such approaches are enormously risky. “I know a lot of First Nations who got involved with economic development and stopped becoming the protesters, they stopped blocking highways, because the people they’re stopping are their customers and clients.”

To Kai Nagata, communications director for Victoria-based Dogwood Initiative, an environmental non-profit, the question of whether Standing Rock can be replicated in BC is moot. Direct action and protest on the North Dakota scale is the mark of failure, he says: the goal should be to make sure British Columbians are not forced to such extremes. “It should never get to that point,” he says. “If your consultation has failed so utterly that you have to send in water cannons to hose people down in sub-zero temperatures, and people are lighting tire barricades on fire, that’s a complete failure on the part of the government which is supposed to be the fair broker between pipeline proponents and communities.”

Just days after Trudeau’s approval of Trans Mountain, Dogwood mobilized more than 200 volunteers to start canvassing BC neighbourhoods in preparation for a “citizen’s initiative”—a uniquely BC process that allows a registered voter to propose changes to provincial laws (or forge new laws). To make such a change, the initiative must collect supporting signatures from 10 percent of registered voters in all eighty-five provincial electoral districts within ninety days of initiating the sign-up campaign; if that is successful, a vote is held across the province. (It was this process that, in 2011, was successfully used to halt the much-hated Harmonized Sales Tax.)

Dogwood’s plan is to launch such an initiative—ultimately asking citizens to support a law banning the expansion of oil tanker traffic on the entire coast—after the upcoming spring election. “Our point is to exhaust all democratic options in order to forestall confrontation,” says Nagata. “There’s a whole spectrum of options available in a democracy, and people shouldn’t feel as though they have no other option as a citizen but civil disobedience.”

No matter what happens on the ground, a BC battle over Trans Mountain is certain to play out in the courts—where success has been found in the past. There is no shortage of parties looking to go after the company and governments involved in the decision. There will be battles over the question of whether affected First Nations have been adequately consulted; conservation groups will continue to go after the federal government for not fulfilling its obligations under the Species at Risk Act to protect endangered southern resident orcas on the tanker route; and finally, there could always be actions by opposed municipalities like Burnaby and Vancouver. In the past Burnaby has clashed with Kinder Morgan and the National Energy Board over the company accessing and clearing land on conservation areas on Burnaby mountain. “We are now seeking legal advice on how best to continue to fight it,” wrote Burnaby mayor Derek Corrigan on November 29. He added that an older application for a judicial review against the NEB‘s approval is pendng in the British Columbia Court of Appeal. Meanwhile, as recently as June 2016, Vancouver launched a legal action also against the NEB‘s approval of the project, which the city’s mayor, Gregor Robertson, claimed was based on a review that was “flawed and biased.”

In the lead-up to Trudeau’s November 30 pipeline decision, Robertson went as far as sending automated robo-calls to city residents, e encouraging citizens to oppose the approval of the pipeline. Trudeau went ahead anyway, setting the stage for what will become a legal and direct action battleground in the months and years to come. If past experience in BC is any indication, it will be the battles in the courts, not at the barricades, that will ultimately carry the fate of the pipeline.