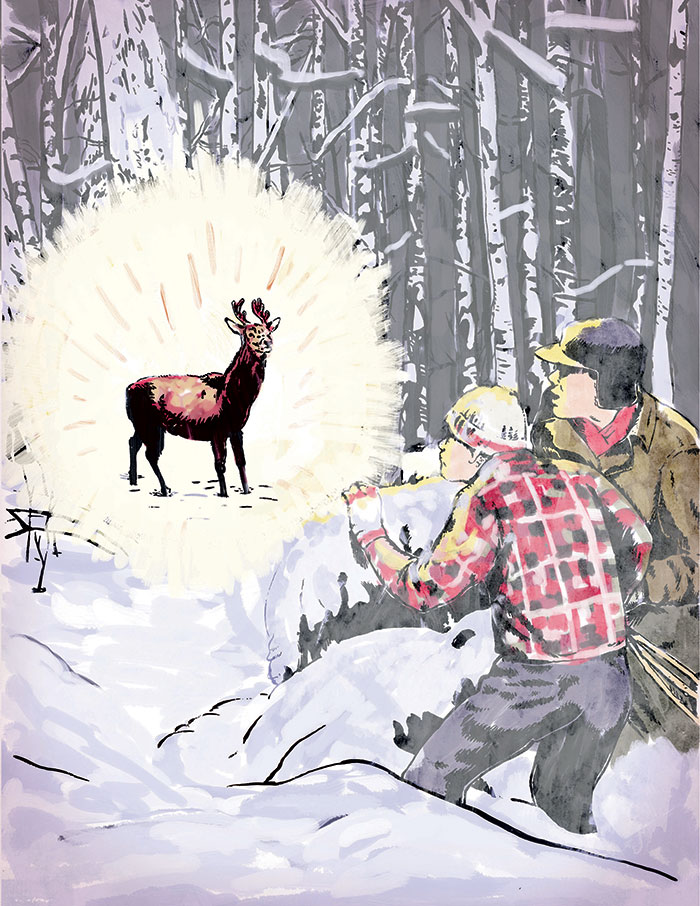 Contorted into downward dog, legs slightly bent, soles on the floor, Maura said, “You have to imagine it’s like a yoni—a great universal twat.” And then she added, “You know? ” Angie just looked at Maura dumbly for so long the tension went right out of it, and then she waggled her index finger, as if she had something to say—what she was thinking was that there was a story hiding inside every other story—but all she had to offer finally was laughter, that deep-down-in-the-well laughter of hers that drew in some and scared off others. She and Maura, though, they knew all the mucky corners of joy, and they just let the laughter burble and roil, and gave in to it.

Angie had visualized a massive latex vulva, had pictured herself prying it open and moving through it, as if through a doorway. It slapped shut, and now she was in a room of her own fantasy—all pastel pink, clean lined, and sporting luxurious fabrics—and Gordon was there, sweeping his hand around as if he had invented it. When the doorway’s lips smacked together, he blinked in a way that indicated the tiniest trace of prudishness. So she had reached back and pried open the lips a couple of times and enjoyed the wet clap of them closing, and also Gordon’s raised eyebrows. It was all so meaningful, if only she knew the meaning. She wondered how difficult it would be to cast a latex doorway; it would be perfect for Nuit Blanche or one of those other artsy events, not that she would ever bother. She hadn’t an artsy bone in her body.

And Maura wasn’t thinking anything funny but was basically swept along on Angie’s infectious verve.

Then Maura’s kid, Malcolm, thirteen, was standing there.

“What are you two laughing about? Tell it to me.” He thought they had a joke. He was holding a yew bow he had fashioned that morning, along with a carbon steel–bladed Opinel knife, number seven, and a relatively straight stick, maple or oak, the women couldn’t tell.

“Close the knife, darling,” Maura said, and gave him that look. “Rules,” she added.

“Tell it to me.” He was an impudent child, and Maura had given over to this for some time, reasoning that ignoring the behaviour was faster and doing so might lead to less unpleasantness in the long run. It was reasoning born out of single parent exhaustion, and would lead to nothing much good.

“What did the corner say to the wall? ” asked Angie.

“What are you planning to do with that bow? ” said Maura. “And is that an arrow? ”

It wasn’t an arrow yet. “Duh,” said Malcolm.

“No, really. We’ve spoken about this before.” Maura shifted back onto her haunches, forcing her shoulders down and her shoulder blades together. It energized something profoundly emotional, she found, and she now felt psychologically flexible, contained. She simply felt open, smart. “Malcolm, what is the plan, is what I am saying here.”

Anyone could hear this was a lie. “You realize—” Maura said, and looked left and saw how hopeless the arrow was, that there was really no chance of anything actually dying as a result of Malcolm’s primitive weaponry—“You realize that hunters are noble. That there are codes to uphold. That a hunter never kills wantonly,” and here she sighed a long, yogic release for equilibrium. “And therefore they butcher, dress, package, and/or dispose of the entrails of anything they kill.”

Malcolm thought how the next day, a Wednesday, was garbage pickup, so he said, “Yeah, not a problem. But what’s the joke? What’s so funny? ”

“Close that up first,” said Angie, referring to the knife.

So he did, and then he made a pose, and a hurry-up gesture with his right hand. Angie leaned over and said, “I hope I die in my sleep like my grandfather did—” and then she raised her eyebrows and looked directly into Malcolm’s sea green orbs and finished, “—peacefully, not screaming like the passengers in the car he was driving.”

Ben Clarkson has drawn for such magazines as Explore and This .