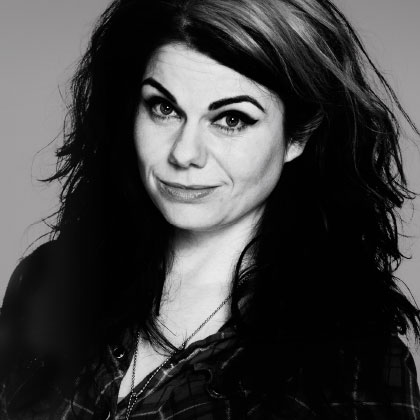 I did not want to be a teenager. The whole thing seemed embarrassing—something I should have found a way to opt out of, if only were I clever enough.

I was the oldest of eight children, and so mine were the first ever bosoms, the first visitations of monthly unpleasantnesses. My younger siblings viewed the beginning of my puberty with a combination of disgust (“Why would you start growing hooters? ”), pity for my monthly bleeding, fear it would happen to them one day (“Does it . . . hurt? ”), and the slight, sibling suspicion that I might be doing something that was, secretly, cool—and therefore was, in some way, screwing them over.

The simplest way they found to deal with the whole issue was to totally shun me.

“No teenagers allowed!” my siblings would scream, running away from me. A year before, when I was wholly flat-chested, I would have been able to run them down. Now, I suddenly had a pair of 36D honkers strapped to my chest, and no bra. I pursued them for a while—holding my breasts in my hands, and shouting “Wait for me, guys!” But there’s a reason Jessica Ennis didn’t win Olympic gold holding onto her bosom whilst demanding that everyone else hold up. My siblings disappeared over the horizon.

In many ways, this rejection made for the perfect coming of age. It allowed me to get high on the traditional opiate of adolescence: self-pity.

“Why do you alienate me? ” I would say, mournfully, to them, as they played Boggle (“No teenagers allowed on Boggle.”)

He was right. Along with the bosoms and the period, I had also acquired the musky, foxy odour of a teenager. Unfortunately, my parents were hippies, and didn’t “believe” in deodorants.

“They give you cancer,” my mother would say, explaining her refusal to buy any.

I would angrily stomp into the garden and rub lavender on my armpits. Then I smelt of sweaty lavender. Sometimes, when we ran out of lavender, I’d use rosemary. Then I smelled of turkey stuffing.

I read in one of my nineteenth-century novels that women sometimes used orris root to absorb their sweat. Mysteriously short of orris root in our three-bedroom council house in Wolverhampton, I substituted self-raising flour, and, over the course of the next few hours, invented the world’s first Armpit Dumpling.

This is how weird you can get when you’re home-schooled. You know The Unbreakable Kimmy Schmidt? My adolescence was basically like the bit before the show starts, when she’s still living down the well. Pre-Internet, with no friends, and a lot of books in the house, I had only a dim idea of how to be “normal.”

One time, I read how the ancient Romans used to cleanse themselves by rubbing oil all over their bodies—then scraping it off with a tool called a “strigil.”

Grabbing a bottle of Mazola, and substituting the strigil for a plastic picnic knife, I started to clean myself in my bedroom. It was fascinating—the dirt would be lifted from the body in lines of filth, suspended within the oil. Not only was I giving myself a deep spring-clean, but I was also avoiding the bathroom traffic jam. (Our one-bathroom house served a total of ten family members.)

My sister Caz came into the room halfway through the cleansing ritual.

“What are you doing? ” she asked, horrified.

“I’m being an Ancient Roman.”

Eventually, I became a goth. As a fat, pale nerdy girl, you’re kind of fighting against nature to not become a goth. Also, the shift from “hippy child” to “goth” is easy—you simply throw all of your long, flowing, colourful hippy clothes in the washing machine with a sachet of black Dylon. Bingo: An entire wardrobe of darkness.

That was my key coming-of-age moment. Before that, I was just an unfathomably weird girl who dressed for Woodstock (in 1986) and smelled of stuffing. I was so weird, the local catcalling yobs didn’t know quite what to shout. “Oi! You . . . Erm . . . Never mind.” I confused them into silence.

After I dyed my clothes black and started wearing eyeliner, on the other hand, I had my own subculture. Suddenly, people knew exactly what to shout. “Oi! Fat Morticia!”

It felt more orderly. I felt like I was finally being recognised as a real teenager.

“I’m being oppressed for the music I like!” I would think, self-righteously. Except I actually hated goth music. Secretly, I was listening to Billy Joel and 500 Miles by The Proclaimers.

That’s the thing about your teenage years. No one ever tells you how to do it. From Boggle refugee, to ancient Roman, to oily manatee, to fat Moriticia, you’re just making it up as you go along.