The Joy, and Science, of Cold-Water Swimming | The Walrus
Skip to content 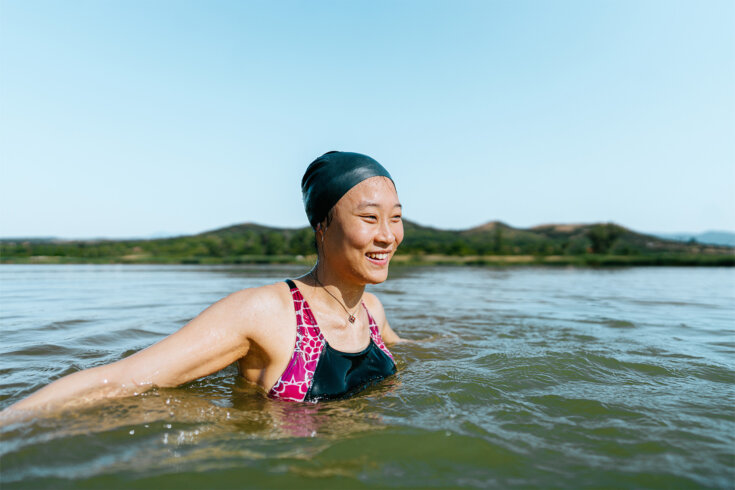 I’ve lived most of my life looking younger than my age. I love the shock on people’s faces when I tell them how old I am (“No! You can’t be!”), and I’m proud of the many times I’ve stumped the guy at the guess-your-age booth at the Canadian National Exhibition. I credit this, in part, to a secret formula. It’s not quite the fountain of youth, but it’s the greatest anti-aging potion ever discovered: swimming in cold water.

I get asked on a near-daily basis, “What could possess a person to go into freezing-cold water voluntarily?”

Or, put more simply: “Are you crazy?”

My love affair with cold-water swimming didn’t really get going until I was nearly fifty. I’ve always had a high tolerance for the cold, which I suspect is partly genetic. In the dead of winter, my father used to go out hatless, with the front of his coat unbuttoned. People would say, “Mac, how can you stand it?” Now they say much the same to me.

When my body entered the inexorable process known as menopause, “the change” came with the standard panoply of negative effects: mood swings, insomnia, depression, the works. As for hot flashes, what I had weren’t intermittent surges of body heat. No, I felt hot all the time. Inside, outside, no matter the weather. Raging, unremitting heat—except when I was in the water. Even in normal summer water temperatures of twenty degrees or higher, swimming helped cool me down, though warm weather itself was also a kind of curse.

I struggled with depressed moods for years before I learned that “reverse SAD,” or summer seasonal affective disorder, was a real diagnosis. That, combined with my menopausal turmoil, was what drove me to explore cold-water “treatment” before I even knew there was such a thing. Autumn, when the lake temperatures started to drop, was my season of relief. Over time, even as early winter arrived, I just kept on going, long after everyone else had left the beach. Most days, it was just me and the occasional dog.

As the water grew colder, I found myself experiencing real freedom—not just from my internal inferno but also from my gloomy outlook and terrible mood swings. Cold water brought back my interest in life. It gave me back my joy.

Believe it or not, humans have been voluntarily immersing themselves in cold water for a long time. A survey of cold-water immersion practices through the centuries simultaneously yields a kind of capsule history of science itself. Many animals, such as walruses, polar bears, and most fish, thrive in cold water, but we humans are understandably wary of its danger and extreme discomfort.

It’s hard to think of an activity that screams, “Buyer beware!” more than plunging into freezing-cold water, but claims for the health benefits of cold water date back to antiquity. Hippocrates, the great Greek physician, was a proponent of water therapy in general and cold water in particular.

For centuries, claims that cold-water swimming improved human health and well‐being were based largely on folk wisdom and anecdotal accounts. That began to change in the late eighteenth century with the work of Scottish physician James Currie, who used cold water in the successful treatment of a contagious fever in Liverpool. In 1797, he published an influential pamphlet, Medical Reports on the Effects of Water, Cold and Warm, as a Remedy in Fevers and Other Diseases, that contains the first English record of clinical observations using a thermometer.

The practice of sea bathing became popular around the same period, and coastal countries saw the growth of seaside resorts to capitalize on the perceived health benefits of salt water. In 1846, Victorian physician James Gully published The Water-Cure in Chronic Diseases, describing the pioneering hydrotherapy treatments at his clinic in Malvern, England, where famous patients included Charles Darwin, Charles Dickens, and Florence Nightingale. The hydrotherapy movement crossed the Atlantic in 1866 with the establishment of John Harvey Kellogg’s sanatorium in Battle Creek, Michigan. The popularity of hydrotherapy diminished with the rise of modern medicine, and cold water was consigned to the category of things to be avoided at all costs.

Because humans are terrestrial creatures, not aquatic, the bulk of our science on human adaptation to cold has concerned itself with cold climate rather than cold water. It’s a bit of a mystery that humans have any ability to tolerate cold at all, since the scientific consensus is that Homo sapiens migrated out of the tropical environment of Africa thousands of years ago. Some researchers lean toward the view that our cold adaptability stems from genetic material handed down to us by our Neanderthal ancestors.

In recent years, groundbreaking work in cold-water immersion has been carried out at the University of Portsmouth in the UK. Michael Tipton is a professor of human and applied physiology there. His colleague Heather Massey studies human physiological responses to cold and other extreme conditions. In addition to being researchers, both Tipton and Massey are athletes: Tipton is an Ironman triathlete; Massey is a seasoned cold-water swimmer who completed a solo crossing of the English Channel in 2019. The fact that they are both scientists and active participants in their subject of study gives their work a real-life applicability, acknowledging both the risks of cold-water immersion and the fact that people want to do it anyway. (Combining her passions, Massey sometimes swallows wireless thermometer capsules so she can monitor her body temperature during swims.)

In early 2021, Tipton set out to debunk some of what he called the “flawed beliefs” circulating among cold-water devotees, in particular the idea that swimmers can extend their habituation to the cold for longer and longer periods. In fact, Tipton says, repeated exposure to cold water can produce what he termed a “hypothermic” adaptation, in which the acclimated individuals shiver little or not at all and paradoxically feel comfortable even as their deep body temperature falls. In other words, some open-water swimmers—particularly those who are well acclimatized to cold—can lose the ability to judge how cold their bodies actually are.

Tipton gives the chilling example (no pun intended) of Jason Zirganos, a legendary marathon swimmer who completed four progressively faster crossings of the English Channel in the early 1950s. He was the first person to complete the Triple Crown of Open Water Swimming, which, besides the English Channel, includes crossing the Catalina Channel, in California, and circumnavigation of Manhattan island. There’s some controversy over his Manhattan island swim, with reports that toward the end he had to be pulled, almost completely unconscious, from the water. Like so many elite swimmers, he was always determined to outdo himself, and in 1959, he embarked on a thirty-five-kilometre swim across the North Channel from Northern Ireland to Scotland, in water around thirteen degrees. At no time during the swim did he claim to feel cold, yet Zirganos had to be pulled from the water again. He was in the throes of hypothermia, and despite efforts to revive him, he later died.

In Tipton’s words, Zirganos “swam to unconsciousness” because, over time, his body had lost the physical signal that he was getting too cold. Over the years, I’ve noticed some version of this in myself. You can get almost too used to cold water. From the first time your body tries to tell you—very sensibly—that it doesn’t want to be there, and through regular immersion, you unlearn that series of reactions.

Many people say they begin cold-water swimming to stretch themselves, go beyond their limits. Tipton’s message is a continual reminder that the human body has very real limits in its ability to deal with cold water. They may vary from person to person, and they can change with time and circumstances. But we ignore them at our peril.

On the afternoon of September 2, 2017, I walked into Lake Ontario. Nothing remarkable about that. Over the past three decades, I’ve probably gone into the water off Ward’s Island more than a thousand times. This was just another day at the beach, and yet it was something more than that. I was embarking on a challenge.

I resolved to swim seventy kilometres between September 2 and October 24, 2017, the day I would turn seventy. It wasn’t going to be a particularly daunting task. I had fifty-two days to achieve my goal, which worked out to a pace of less than one and a half kilometres (almost a mile) a day. I swim that much as a matter of routine during the summer months, but this was early autumn, and I figured I’d need a head start before Lake Ontario began to cool down. By late October, the temperature would have dropped to ten to twelve degrees. I’d keep swimming, of course, but I’d have to cut down my time in the water.

As the kilometres added up and I got closer and closer to the end point, I found an ambivalence, even a kind of melancholy, creeping into my mood. Forty may be the new thirty, sixty the new fifty. But seventy? Seventy isn’t the “new” anything. It’s just old. Even the day I swam the last kilometre, I didn’t feel triumphant the way I had on completing my 365-day swim the year before. I wasn’t at all sure that turning seventy was something to celebrate. But it amazes me that, as I move into old age, I’ve finally found something I can do that few other people can. I’m not really brave or tough, though I enjoy that people think I am. Cold-water swimming is the only physical activity that I am, by some miracle, innately good at. It has made my life immeasurably better.

There are people who are indifferent to water. There are people who hate getting wet. And there are people like me who can’t see a body of water without thinking about jumping into it. I love being in water. I can’t live without it. In more ways than I can count, swimming has come to define my life. As I become more acutely aware that my time on this planet—consisting mostly of water—is diminishing, it’s truer than ever.

Kathleen McDonnell is the author of nine books. Her latest, Growing Old, Going Cold: Notes on Swimming, Aging, and Finishing Last, was published in May 2022.