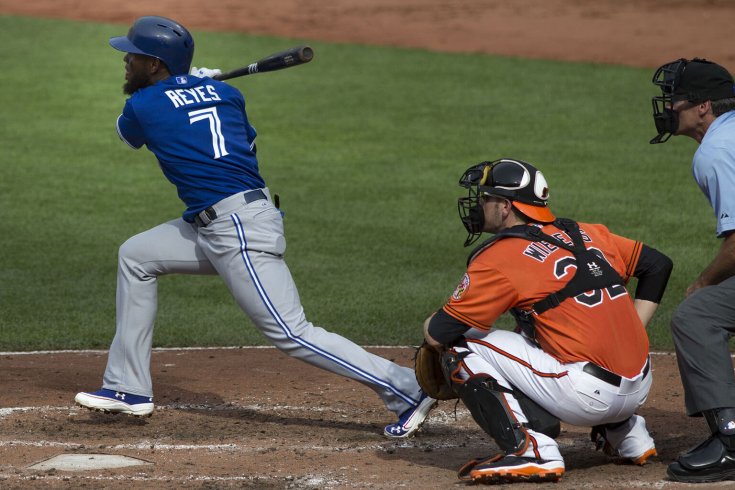 Jose Reyes at the plate.

I’ve been thinking a lot about the idea of someone being “innocent until proven guilty.” What was once solely a legal term is now a familiar sports phrase, tossed around a great deal when a high-profile athlete “allegedly” engages in violence. (I’ve been thinking a lot about that word “allegedly” too.) A man hits a woman, a man rapes a woman, and the constant messaging for months on end is that he’s innocent until proven guilty.

Let’s not rush to judgment, they say. Let’s not get ahead of ourselves, they say. Let’s await the facts, they say. (It’s worthy of note that “they” are mostly men.) We saw this very line of thinking this summer, when Chicago Blackhawk and NHL superstar Patrick Kane was accused of rape. His supporters have since become unequivocally convinced that he’s innocent because Kane’s accuser has officially stopped cooperating with the investigation. We saw that same line of thinking again this past weekend, when known (but not convicted) domestic abuser Greg Hardy suited up to play football for the Dallas Cowboys—this after Deadspin committed the incredible violation of publicly releasing pictures of a woman’s brutally battered body, the work of Hardy’s “garbage human” hands. (“Visuals matter,” they say.)

And even with all Hardy’s recent egregious and unprofessional behaviour, even with him shoving teammates and coaches, there are still those who believe that a man who threw his ex-girlfriend on a bed covered in assault rifles deserves his second chance.

Last week we received the upsetting news that, while in Hawaii, former Toronto Blue Jay and current Colorado Rockies shortstop José Reyes assaulted his wife. (Or rather “allegedly” assaulted his wife, and is innocent of assaulting his wife until he is proven guilty of assaulting his wife in a court of law.) He was arrested, his mug shot was taken, and he was released on $1,000 bail. His wife, Katherine Ramirez, was treated for injuries to her thigh, wrist, and neck. Rockies general manager Jeff Bridich said the situation was “unfortunate.” New York Yankee Carlos Beltran sent Reyes a message of support and said, “He knows he made a mistake and he’s gonna do everything he can to make it better.” Forbes sportswriter Tom Van Riper wrote an absurd piece about how (let me get this straight) it was actually unsurprising that Reyes might brutalize his wife given his “underachieving, regressing” on-field performance, and that it was sad (if true) because Reyes could have been as good as Derek Jeter, and (again) that maybe we all shouldn’t rush to judgment. Oh, and Major League Baseball commissioner Rob Manfred let everyone know Reyes has a right to privacy.

The knee-jerk response of sports culture to domestic violence was revealed to be thus: never risk offering a kind word to the victim, never vigorously chastise the action, and never offer a definitive opinion on the matter. Instead close up all the gates, lock all the doors, and recite meaningless, palatable, stock PR phrases until the problem dissipates.

I loved José Reyes. I cried when he was devastatingly injured in April 2013, and I was disappointed when he was traded to Colorado this past July. I cheered jubilantly for him for the two years he was on “my team,” and I made positive assumptions about him and his character. But none of this means I am in any way shocked by this revelation, or automatically disbelieve that he grabbed his wife by the throat and shoved her into a sliding glass door.

While some sportswriters penned their surprise because Reyes was so “jovial” and “charming,” and was such a “nice guy,” those of us who have been abused, or have witnessed abuse, understand all too well that nice guys hurt women all the time. Abusers are not convenient monster caricatures that are easy to spot and steer clear of. More often they are our friends. They are kind and smiling, well-liked and lauded, because that’s exactly the kind of person you allow to get close enough to you to hurt you.

When the MLB and every hack with a sports column tells me to wait before I decide to have empathy toward the woman a famous male athlete allegedly abused, my only response is “I will always believe the victim.” I believe that José Reyes grabbed Katherine Ramirez by the throat and shoved her into a sliding glass door, because that’s what she told the police happened that night.

Many people are optimistic that the MLB will take advantage of this “opportunity” to showcase the effectiveness of its new domestic violence policy, unveiled in late August. That this is Manfred’s big chance to make an example of someone and ensure the public understands he actually cares about victims of violence. That he can make a statement that baseball is different and better than those other, less civilized sports.

But to be honest, the MLB doesn’t necessarily fill me with a huge amount of optimism, given it actually has a worse record on these issues than the NFL. As Think Progress rightly points out: “In the past 25 years, despite numerous domestic violence arrests and accusations, no player has been suspended by the league for domestic violence, and only a few players have been disciplined by their individual teams. In his 22-year tenure, former commissioner Bud Selig never once intervened in a domestic violence case.” Never once. Given the system has failed so egregiously so many times, it seems futile, even foolish, to wait for a group of men who control the sport (and who by and large do not understand the issues at hand) to dictate an appropriate course of action.

In the meantime, I am more than willing to risk being wrong to support those who will now “allegedly” live the rest of their lives processing what has been done to them. I will unashamedly take that risk every time this issue rears its ugly head. We don’t live in a courtroom, nor do we live in a boardroom where men dictate the “best outcome” when another man brutalizes a woman. Frankly, no one should ever have to wait months, even years, for a dictum of truth dished out by complete strangers before the world decides she is worthy of our empathy and care.