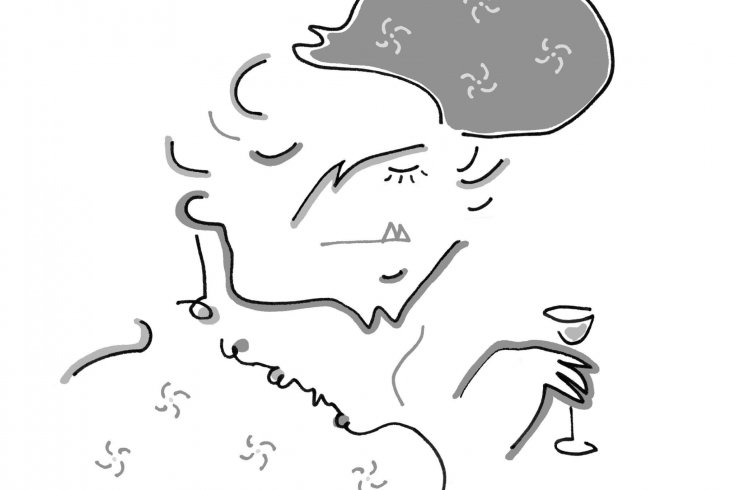 I threw a loaf over the gate. A man caught it but another man tackled him. Pondark threw a second loaf so they’d each have something but the heavier guy just ended up with both loaves. He tore right into them even though they had blood on them.

Pondark didn’t say anything. He never does. He pulled another loaf out of the box and tossed it.

An old man caught this one. He opened his jaw wide and—

He stared at me.

A woman took his loaf. He still didn’t move.

He just stood there, staring.

Mom throws parties. She throws champagne at people and they stay for days. Lady Coco-Sheen lives with us, just about.

She and Mom were sitting at the grand, though neither of them play.

“For God’s sake,” she said, “Some Montrachet. Grand Cru. I’m not going to breakfast sober.”

“I wouldn’t get too friendly. Meat’s at a premium. Look at what’s-her-face, over there. The Dowager Countess. What do you think happened to her? ”

Mom just about fell off the bench. She caught me by the neck. While she was there, she whispered:

“A whiff of responsibility, dear. Life isn’t all parties.”

“Keep them coming,” she said.

There were a few dozen of them at lunchtime. Kids, even. When they saw us, arms shot through bars.

I knew I’d have to throw quite a few before a kid got one. But I picked up a big loaf, took aim and—

Clutching the bars. Watching me.

I dropped the loaf.

The old man was covered in dust. His clothes were horrible and torn.

Dad’s not your typical dad.

When he gets drunk, he climbs trees.

On the north side of the estate, there’s an orchard. Plums, mostly.

There was a pile of corks and plums under the one tree. I climbed it.

Dad was sitting in the V with a wine bottle.

He laughed. He lost his balance, but found it.

He grabbed a branch. He steadied himself.

He found his balance, again.

He rubbed his face.

“Damn,” said a voice in the leaves.

Lady Coco-Sheen was alone on the piano bench, wrapped in a silk shawl, holding a wine glass. She had a diamond ring on every finger. I guess I stared at them.

She raised her glass. She paused.

“Sir Roger Crane,” said Mom, from behind me.

“Fox hunting,” she said, “is a proud tradition.”

After midnight, I crept downstairs.

Music and laughter poured from the ballroom doors.

I took some chocolate from the pantry. I slipped outside.

There were only a few people at the gate.

I didn’t see the old man.

But there was a girl my age. Right by the bars.

I stepped closer. Pondark never let me get so close.

The girl stepped back. Her gray dress. . . . There was barely enough cloth to hold the holes together.

I held out the chocolate.

I broke off a piece. I ate it.

She took a step. We both did.

I broke off another piece.

I reached through the bars. The girl reached out. She took the chocolate.

She sniffed it. She nibbled it. She seemed to like it.

I gave her the rest. She wolfed it down.

The girl hesitated. Then she took it.

I squeezed her hand.

She squeezed mine back.

She bit my hand.

If I hadn’t pulled it back fast, she’d’ve bitten the knuckle off.

I ripped a loaf in half and stuck my fist in it.

I watched it turn red.

My hand looked a bit better in the morning. I still worried Mom would notice it but . . . Lady Coco-Sheen was wearing a new hat.

At the refreshment table, someone touched my shoulder. I turned around.

“Gray is not a blonde’s color,” she said. Then she grabbed a sandwich and vanished.

I’d put a blue dress on that morning.

I went back to my room and closed the door. I stood with my back against the door, breathing hard, for a long time.

Sir Roger was sitting at the grand, playing Chopin. Lady Coco-Sheen and Mom and a few others stood around him, listening.

“Because if you stain those ivories, you’re on the next ship to Zimbabwe.”

He opened his coat. A pistol handle poked out of his breast pocket.

Sir Roger raised the cigarette to his lips. Lady Coco-Sheen snatched it. She took a puff.

“Cigarettes are harmless,” she said. “Unless, of course, you put them in your mouth.”

A man had smashed through the bay window. His hands were bleeding. His face.

Mom heard me. She looked at me. Her face. She breathed hard. She grabbed my arm.

The man staggered forward. Reaching out.

Everyone ran to the south wall. Mom dragged me with her.  I kept looking back.

The man fell down.

Sir Roger was standing in the middle of the ballroom.

He lowered his pistol.

Dad climbed through the bay window. There was almost no glass left in it. When he saw the man on the floor . . .

There was blood all over the floor.

The man quivered. He quit moving.

I covered my mouth. I backed out of the room.

I’d changed five times that day. But my dress was gray, again. And…

There were holes in it.

Lady Coco-Sheen. Dragging her bags down the stairs.

“I’m getting out of this house!”

“Mum? ” Pondark reached for her bags.

Pondark rushed to the door and opened it. Lady Coco-Sheen moved so fast, her feather cap blew off. I caught it.

She turned. She looked me up and down.

“Keep it!” she spat, and vanished.

They’re out there. Sir Roger and the other men. Morning, evening.

I counted a hundred gunshots, the one night. Then I fell asleep.

My face is raw from washing. The dust comes back.

When the time comes.

Will they do the same to me?