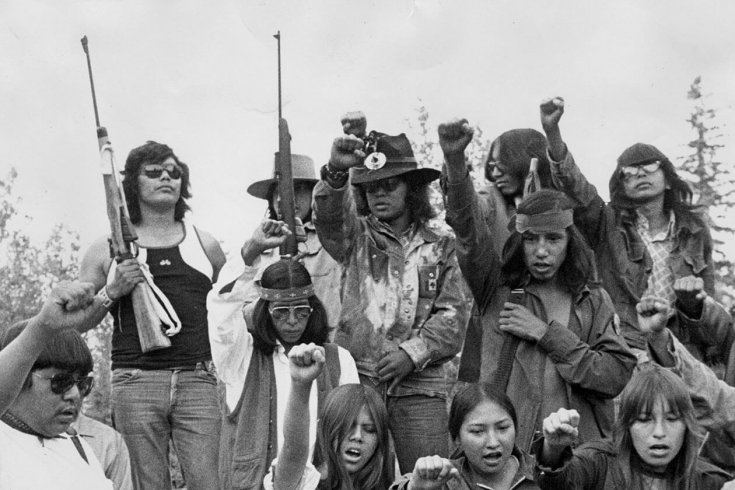 Photo by the Canadian Press

Vancouver’s Stanley Park—a place known for its dense forests and primeval atmosphere—was, as recently as 150 years ago, home to Squamish villages. People lived there for thousands of years. On the eastern edge of the park, facing downtown, there is a little island known to the Squamish as “skwtsa7s.” Salish oral histories record that the island was the site of a siege, one that ended with a sacrifice described here by Pauline Johnson in her Legends of Vancouver:

Out before a long file of southern warriors they stood. Their chins uplifted, their eyes defiant, their breasts bared. Each leaned forward and laid his weapons at his feet, then stood erect, with empty hands, and laughed forth his challenge to death. A thousand arrows ripped the air, two hundred gallant northern throats flung forth a death cry exultant, triumphant as conquering kings—then two hundred fearless northern hearts ceased to beat.

Canadians have always thought of their country as an archipelago of cities in a sea of untouched wilderness. We see this idealized version of the country in everything from paintings by the Group of Seven to the works of Farley Mowat. It’s also a concept that the government likes to promote: forests, mountains, and lakes all feature regularly in Canada’s 150th anniversary promotions. In fact, Parks Canada released much-celebrated Discovery Passes in January, which grant free access to National Parks for the year.

Many Canadians see the collective possession and exploration of this wilderness as a right of citizenship. But the pristine landscapes seen in government promotions—and the very concept of Canada as a wilderness—are unrecognizable to me and to other Indigenous people. In addition to being the sesquicentennial, 2017 has also been designated as a year for reconciliation with First Nations, Métis, and Inuit peoples. As an ongoing part of this reconciliation, the government acknowledges the traumas of the residential school system. But it still celebrates other crimes—specifically, a parks system that has robbed and impoverished Indigenous peoples.

In the nineteenth century, some of our land was taken for farming; in the twentieth century, still more was appropriated for public works and military use. And all throughout these years, continuing to this day, thefts have been occurring under the guise of ecological preservation—green colonialism.

Many in Canada dismiss Indigenous peoples’ connection to the land as romantic and irrational. They say that we should abandon it to move closer to the urban areas for our own good. In a piece for Maclean’s, journalist Scott Gilmore wrote that First Nations must “leave these [remote reserves], forever” or, pending that, be sent “a backhoe as they keep digging graves.” Former prime minister Jean Chrétien has made similar statements. Indigenous people who don’t want to leave their land are simply “nostalgic about the past when they were going hunting and fishing,” he said in 2016. Even Jonathan Kay, the former editor-in-chief of this magazine, once stated that the abandonment of our homelands was the only way for Indigenous people to “make a living and exist in dignity.”

But the desire for the return of these lands goes beyond nostalgia. The places Canada has made into parks are filled with our stories—every mountain, every valley has a name and a history for Indigenous peoples. It is in these places that our history is alive: our Mecca is here, our Magna Carta, our Thermopylae.

Canada’s parks departments have treated Indigenous peoples like an infestation ever since the founding, in 1885, of what is now Banff National Park. Looking out at the territories under his supervision, superintendent George Stewart demanded that “Indians” be barred from the area. “Their destruction of the game and depredations among the ornamental trees,” he wrote, “make their too frequent visits to the Park a matter of great concern.” In the early twentieth century, as non-Native settlements such as Banff and Jasper grew, the livelihoods of First Nations peoples were destroyed.

This tactic soon became standard practice on other “protected” lands. In Algonquin Park, Algonquin people were denied title and recognition for their towns of Lawrence and Nightingale, which lay within the park’s boundaries. In 1895, Aubrey White, Ontario’s assistant commissioner of Crown lands, wrote of the presence of Algonquin people in language that we now reserve for the Asian pine beetle: “You know the predatory habits of these people, how they roam about, and how difficult it is to keep watch of their movements in the forest.” The Algonquin people were eventually forced out into distant reserves.

At a 2000 hearing before Canada’s heritage committee, James Plewak of the Keeseekoowenin Ojibway First Nation discussed the founding of Manitoba’s Riding Mountain National Park in the 1930s. “Our people were burned out of their homes,” he said. “Indians and parks were considered not to be compatible.”

Such actions are not relegated to the past. The government aims to designate 17 percent of Canada as protected space by 2020. To this date, protected areas are still being created without Indigenous consent. In 2016, the Surrey Bend Regional Park was established in British Columbia within the territories of the Katzie and Kwantlen First Nations—land that is currently under negotiation as part of the Katzie treaty process. As Tumia Knott, councillor for the Kwantlen First Nation, says, “We’ve noticed that where these parks have been situated is rather strategic—they’re places of real significance and importance to Kwantlen.”

As indigenous peoples rebuild, we are striving to reconnect with our lost territories. This means reclaiming parks whenever possible and asserting stewardship and economic rights when we can’t get the land itself back. The modern fight to reclaim land began with the 1974 Ojibway occupation of Anicinabe Park near Kenora, Ontario. Since then, some battles have involved guns—during the Ipperwash Crisis in 1995, for example, unarmed First Nations activist Dudley George was killed by out-of-control police. Other fights have taken place in the courts—the landmark 1999 R v. Sundown decision, for instance, recognized First Nations’ traditional rights to establish hunting infrastructure in parks, exempt from provincial regulation. Around the negotiating table, Indigenous peoples have worked to prevent the unilateral creation or expansion of parks at Pukaskwa, Point Pelee, Wager Bay, and Great Slave Lake by government.

In Vancouver, the Musqueam people have reclaimed portions of Pacific Spirit Regional Park and the surrounding area, near the University of British Columbia campus and on the western edge of Vancouver. Understandably, the Musqueam have done what anyone would do to a parcel of west-side Vancouver: they cut down some trees and plan to put up condos. Just like James Plewak said in reference to Riding Mountain National Park, these lands are “the most important resources we [have] to sustain our lives.”

Musqueam’s construction plans produced a litany of irony-immune quotes from local residents: “Once you’ve allowed a little bit of the park to be removed, no park in the whole province is going to be safe anymore”; “We don’t think it’s right that the government should take [land] and give it away”; “Are we going to go giving away parks like Stanley Park?” For centuries, First Nations have seen our land taken from us one piece at a time. It’s galling to see our words turned against us as we take our lands back.

Not every repatriation ends with two-bedroom condos. Some result in First Nations creating parks of our own. The Tsilhqot’in Nation in BC turned much of its newly recovered lands into the Dasiqox Tribal Park. Elsewhere in the province, the Doig River First Nation has been struggling to establish the K’ih tsaa?dze Tribal Park.

But these are not typical parks where nature is protected from human use. In an interview with the DeSmogBlog, Jack Woodward, a lawyer for the Tsilhqot’in First Nation, explained that tribal parks are created to defend the “sustainability of the ecosystems necessary to support the aboriginal or treaty rights.” He explained that “a tribal park recognizes the fact that you can still live on the land, and make a living from the land.”

Such approaches face predictable non-Native resistance. In Osoyoos, BC, a local newspaper published remarks from petitioners who were upset about First Nations involvement in a new park. The words of one stand out: “The ridiculous allowance that hunting is their right anytime any place will be the extinction of our wildlife.” Comments such as that are virtually identical to those spouted by the superintendent of Canada’s first park, and show that far too little has changed in the last 150 years.

Canadians advocating for more protected spaces need to understand their own history. A major part of reconciliation is accepting that when we celebrate Canada 200, Algonquin people may again be living in Algonquin Park, and that Stanley Park and the turquoise waters of Moraine Lake in Banff National Park may be dotted with First Nations homes and businesses. Wilderness may be a sacred concept to Canadians, but it’s one that must be sacrificed if reconciliation is to have meaning.