Can We Replace the Hip? | The Walrus
Skip to content 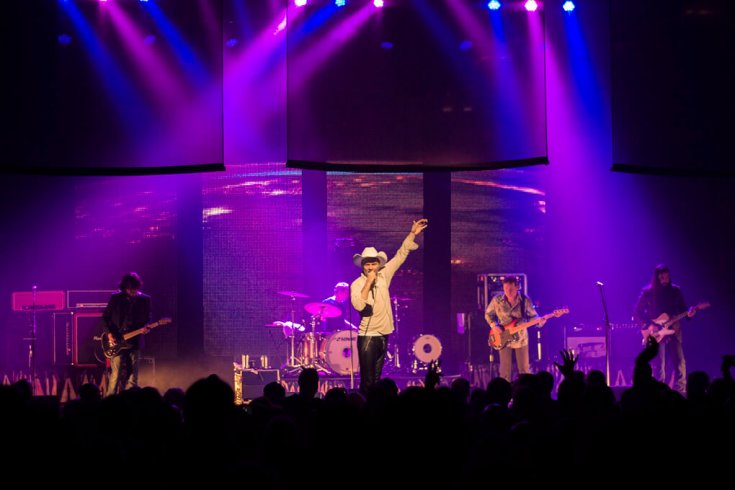 You’ve heard of the reunion tour. How about the living-funeral tour? In May, a few days after the heartbreaking revelation that Gord Downie, lead singer of the Tragically Hip, had been diagnosed with terminal cancer, the band announced that they’d be hitting the road one last time. This was big news for both Hip fans and opportunistic ticket resellers. On June 3, the first round of concerts sold out within minutes, and third-party brokers made sales of more than $1,200 per seat.

The band hasn’t been this popular since their ’90s heyday, when their biannual touring festival, Another Roadside Attraction, was the Canadian equivalent to Lollapalooza. Perhaps morbid curiosity is inflating sales in 2016, but I suspect that even casual fans have been galvanized by a genuine sense of nostalgia. There will never be another act like the Hip, in part because there’s no longer a need for one. When the Hip finally call it quits, they’ll be leaving behind a mixed legacy. They’re a very good band. They might have become a great band, had they transcended their own mythology.

The Hip’s greatest songs are evocative and regional; their dullest come off like the rock ’n’ roll equivalent of Heritage Minutes.

After bursting on the national scene with their third record, Fully Completely (1992), the Hip became known as “Canada’s Band,” a designation that partially explains both why they were so beloved and why the mention of their name makes some people cringe. When they released their iconic sixth record, Phantom Power, in 1998, I was a fourteen-year-old in suburban Toronto babysitting for a family who paid me in Hip albums—a Canadian barter currency that was for me as precious as beaver pelts. I loved those records, and today, I’m surprised by how well some songs hold up, although listening for too long is like gorging on maple candy.

It’s hard to do regionalism in pop music without sounding corny. Joni Mitchell and Neil Young managed by combining Canadiana folksiness with California cool. Local influences often work best when they’re understated—evoked formally rather than shouted from the mountains. The Hip did this well, occasionally, capturing the strangeness of the northern landscape—which at times became a metaphor for human isolation. Their greatest songs are evocative and unselfconsciously regional. Their dullest songs, however, come off like the rock ’n’ roll equivalent of the Heritage Minutes.

Musically, the Hip were of their time: They specialized in the kind of rhythmic, riff-based guitar rock that by 1989 was roaring back to life as the decade of the synthesizer wound down. Lyrically, Downie had a country singer’s passion for narrative, a flair for surrealism, and the blue-collar credibility of Bruce Springsteen and Merle Haggard. He was also an archivist, lifting passages wholesale from hockey cards or Hugh MacLennan novels. By 1992, the Hip had lyrics about Jacques Cartier, the 100th meridian—the longitudinal line where central Canada meets the Prairies—and the mysterious disappearances of both Group of Seven painter Tom Thomson and Maple Leafs defenceman Bill Barilko.

Downie sifted through regional history like a beachcomber, sometimes using his finds in wonderfully creative ways. “Wheat Kings” is ostensibly about David Milgaard, who did twenty-three years for a murder he didn’t commit. But it also feels like a road song—Milgaard, after all, was arrested during a road trip—depicting a prairie landscape of dramatic sunsets, ornamented weather vanes, and drab high schools where the walls are “yellow, grey, and sinister / hung with pictures of our parents’ prime ministers.” “Locked in the Trunk of a Car,” written in the country-noir style of an American murder ballad, explores guilt, shame, and existential terror, and is said by some to have been based on the FLQ kidnapping of Pierre Laporte. The song holds its own regardless.

At the best of times, Canadiana coloured Downie’s lyrics but didn’t define them. At the worst of times, though, Downie reiterated tiresome Canuck monomyths. The song “Fireworks” begins, “If there’s a goal that everyone remembers, it was back in old ’72.” The goal in question was scored by Paul Henderson, clinching the Cold War Summit Series for Canada. In the song, a male character falls for a woman and suddenly doesn’t care about the game: the giddiness of sports fandom turns into the giddiness of puppy love. It’s a nice conceit, but it’s supported by irritating stereotypes. The female character says that she doesn’t “give a fuck about hockey,” and the man responds, “I never saw someone say that before.”

This is the Canada of self-satisfied Molson commercials: One nation under hockey. It’s a folksy myth, one that many Canadians—those who like basketball, say, or prefer dancehall over white-guy rock ’n’ roll—may not recognize in themselves. Inevitably, Canada’s band skewed toward a specific demographic: Anglophone, white, and partial to flannel shirts.

Plus, as the gritty early records gave way to anodyne folk-rock ballads like “Bobcaygeon” or bar-band jams like “Silver Jet,” the group inevitably fell behind the times. In 2002, they hired Don Cherry and the Trailer Park Boys to perform in the music video for “The Darkest One”—an acknowledgment that the song wasn’t going to sell itself. The records that followed—In Between Evolution, World Container, We Are the Same, and Now for Plan A—are more forgettable than bad. They hit the usual CanCon talking points, with songs about polar bears, deceased hockey players, and ice-rink romances, but ultimately it’s their blandness that makes them Canadian. The new tour will support the latest record, Man Machine Poem, out today, but fans will come out to hear the old standards: swampy numbers like “New Orleans Is Sinking” and “Blow at High Dough,” which Downie, no doubt, will imbue with a new sense of urgency. The Hip have always been a formidable live band.

Perhaps that’s all they needed to be. No musical act can speak for a country as large, as fractured, or as regionally diverse as this one, and today, thankfully, most no longer try. That’s not to say that pop musicians aren’t interested in where they’re from; just that they’ve learned to paint lightly, often evoking a sense of place through music itself. The influence of the Quebec chanson is audible on every Arcade Fire album. Noah Shebib, producer for Drake, creates beats that are as tidy as Toronto condos and as icy as winter. Tanya Tagaq’s throat singing is every bit as jagged and ethereal as the Arctic terrain. And Destroyer’s last two records are dripping with ’80s kitsch, evoking the old Vancouver—the one of dingbat houses and faux-glamorous apartment lobbies—that real-estate developers are quickly obliterating. These artists paint regional pictures without mythmaking. The Tragically Hip didn’t always find that balance.

There is one Hip album, however, that, for me, stands the test of time. Day for Night (1994) at first confused critics who weren’t sure what to make of its cryptic lyrics, but it’s a record about primal human feelings, with song titles such as “Scared” and “Inevitability of Death.” The opening track, “Grace Too,” depicts an encounter that’s freighted with nervousness and sexual expectation. The music is grizzled blues rock overlaid with plaintive guitars that sound like they’d be audible from hundreds of kilometres away. Day for Night is a dispatch from a vast, dark landscape. I’m not sure if I’d call this place Canada, but it feels like a country I know.